Russia is placing civilian flights at risk by dispatching jet fighters and bombers into European airspace without following safety procedures, according to Nato’s secretary general.

Jens Stoltenberg told the Telegraph that Nato fighters had intercepted Russian military aircraft over 100 times so far this year, compared with 30 such incidents in 2013.

there was that one that they shot down. so, generally not a news flash.

Unless and until you fly up to meet them they will keep doing it.

So Nato is complaining about Russian warplanes entering NATO airspace.

As stupid as Putin seems to be about the outside world, he sure helps the Reagan wing of politics in the West and the United States.

The more he does this the more he feeds to the strengths of conservatives and pro-national defense efforts and budgets throughout NATO.

While he is too weak to do anything, he does help us conservatives in all of the NATO nations, and may even lead to Sweden and Finland joining NATO.

Sorry, I missed the part where NATO said what they are able to do about it.

If NATO doesn’t want a military, they need to SUCK IT UP and hope for the best. Thankfully Russia is in a good mood, for now.

NATO has had a military since Day-1.

It's called the US Army, Air Force, Navy and Marines.

When they don't have us to do the heavy lifting they are a Paper Tiger.

” It’s called the US Army, Air Force, Navy and Marines. When they don’t have us to do the heavy lifting they are a Paper Tiger.”

THANK YOU. There are Russian Apologists on this site that seem to think that the Polish Calvary can take on the modernized Soviet Army. Sorry, but that approach failed 75 years ago and will fail again if that’s all that we rely on.

As far as the US military, sorry but our emphasis on LGBTs (and likewise) has pretty much ended any chance that we have of holding our own in Europe and other parts of the world. We will soon GET A BLACK EYE and hopefully we will learn our lesson and, maybe, GET SERIOUS about upgrading our military.

Note that the Apologists cannot find a SINGLE THING WRONG with our military. They are very dangerous people, and I remember them VERY WELL from the Cold War, particularly when they were defending Jimmy Carter’s dilapidated military by claiming that our nukes made us ‘invincible’ in their twisted minds. Thankfully Reagan understood that there are more options than relying on destroying the world in response to a relatively small Soviet aggression, and he gave those options (as in Grenada).

true. With this weak whatever he is in our White House the Russians under Putin will continue to do as they please. We are finding Russian ships in the Pacific. Why? There is no reason. The stupid Obama has let our military go to hell for his fag and Lesbian pals. I hope he gets AIDS on the down low.

Putin is like the 3 year old throwing a tantrum until the adults finally get tired of it. 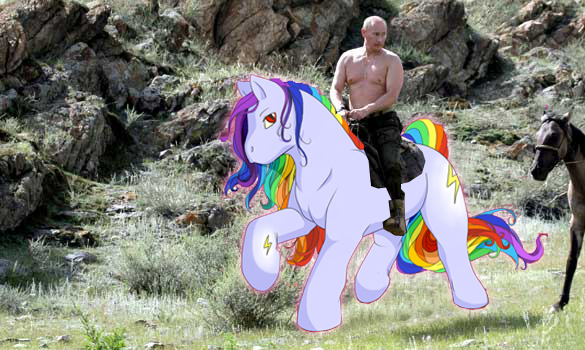