To make a difference going forward, Trey Gowdy and the House’s Benghazi select committee may want to ask how the U.S. got involved in Libya in the first place. What they will discover is that Barack Obama borrowed a page from the Clinton playbook on Kosovo, a lethal exercise in mendacity unparalleled in recent American history. Much of the mischief I unearthed in my forthcoming book, You Lie!, I expected to find. This nugget surprised me.

In his March 2011 address to the nation, Barack Obama laid out the case for America’s surprise military intervention in Libya. “We knew that if we . . .waited one more day,” said Obama, “Benghazi, a city nearly the size of Charlotte, could suffer a massacre that would have reverberated across the region and stained the conscience of the world.” Two days earlier in a radio address, Obama used the word “bloodbath” to describe Benghazi’s likely fate at the hand of strongman Moammar Qadaffi.

Less than two months before America went to war, however, Obama had not so much as mentioned this benighted country in his State of the Union address. As late as September 2009, John McCain was meeting with Qaddafi in Tripoli and describing his regime as “an important ally in the war on terrorism.” Then, just eighteen months later, Obama was asking America to believe Qaddafi was about to smear a Rwanda-sized stain on “the conscience of the world.”

Geez. Now I have to worry about him lying to me when his lips AREN’T moving...

3 posted on 09/24/2014 6:24:11 AM PDT by no-to-illegals (Scrutinize our government and Secure the Blessing of Freedom and Justice)
[ Post Reply | Private Reply | To 1 | View Replies]
To: afraidfortherepublic

Money quote FTA: “[Chris Stevens’] job was to research the various groups involved in the Qaddafi opposition and report back to Washington. Obama would reward his loyalty and courage with the most disturbing lies of his long, dishonest career.”

“Unspoken lie?
Geez. Now I have to worry about him lying to me when his lips AREN’T moving...”

Quote of the day and it’s still early in the AM!

5 posted on 09/24/2014 6:28:08 AM PDT by anonsquared
[ Post Reply | Private Reply | To 2 | View Replies]
To: All
Obama and the Clintons are the plusperfect reasons why we should think of the Democrat party as a criminal combine----rather than a political organization......

Not just the party of Kendall “Agent 202” Myers, the State Department official recruited as a Cuban spy along with his wife during the Carter administration. Excerpts/edited from pjmedia.com ...

Rather, think of the Democratic Party as what it really is.......a criminal organization masquerading as a political party.

We already know that the U.S. military was fully capable of responding to the Benghazi Consulate attacks within 3 – 4 hours. Admiral Lyons – who commanded the Pacific Fleet and has extensive professional, direct knowledge of U.S. military capabilities – explains in detail what capabilities we had in the region and why F-16’s from Italy could have been buzzing the compound and strafing the attackers with machine gun fire within 4 hours or less...

.... the U.S. military could probably have saved the last two Americans to die in the attacks.....

MILITARY.COM reported (during the post-Morsi ousting in Egypt), that US Pentagon officials declined to give specifics on conversations between DOD's Chuck Hagel and brilliant tactician Egyptian Gen al-Sisi (now Egypt's president).

(NOTE Gen al Sisi, 58, received a masters degree from the U.S. War College in Carlisle, Pa, in 2006. The General is revered by Egyptians for routing the Muslim Brotherhood which Egyptians consider a terrorist organization.)

Although officials would not discuss the specifics of the military-to-military talks, the US would have needed Gen al-Sisi's approval to move through Egyptian air space if Washington decided to send Marines to aid in the evacuation of U.S. personnel in the post-Morsi chaos.

READY TO ROLL About 550 Marines and their tilt-rotor MV-22 Osprey aircraft are at bases in Spain and Italy on standby if they are needed. A Navy Amphibious Ready Group with 4,000 Marines and sailors aboard, led by the helicopter assault ship Kearsarge, was also in the region following completion of the Eager Lion training exercises in Jordan.

© Copyright 2013 Military.com. All rights reserved. This material may not be published, broadcast, rewritten or redistributed.

AIN'T KARMA A *ITCH, HILLARY? the US helicopter assault ship Kearsarge, WAS in the region, ready to airlift Benghazi personnel to safety. If Hillary did not know the Kearsage was ready to roll, she's as incompetent as the rest of them..... her all-girl State Dept and the venal Obama admin.

Fact is, Americans were lied to----we were told men and materiel were not available to help endangered Americans in Benghazi.

8 posted on 09/24/2014 6:34:30 AM PDT by Liz ("Sooner or later everyone sits down to a banquet of consequences." Robert Louis Stevenson)
[ Post Reply | Private Reply | To 1 | View Replies]
To: afraidfortherepublic
Why is it that any random cartoonist
(with more documentation than the pRes_ _ent)
KNEW what was going on YEARS AGO,
but the EXEMPT Congress remains dumber than
the Egyptian army (with 5000 years more documentation
than the undocumented First Impostor)? 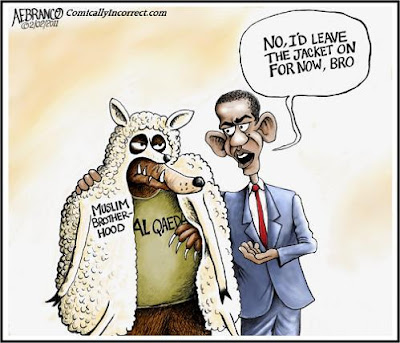 
and thereafter under Obama, the US Government paid
the treasonous murderer's Mosque $23,000 a Month
through Al-Awlaki.

What were 30+ CIA guys doing in Benghazi?

“Rather, think of the Democratic Party as what it really is.......a criminal organization masquerading as a political party.”

I came to that very conclusion somewhere around 1986.

Where oh where did Qadaffi’s gold go?
Ask Hillary and Obama and Soros because they know.

And when we contemplate the (gag) Nobel Peace Laureate bombing a-n-o-t-h-e-r country---we hafta wonder: what's in it for him?

Lest we forget--- among the Chicago criminals in the WH, Obama appointed Valerie Jarrett his "senior policy advisor." In Chicage gangland parlance, that means "wire transfer artist."

Obama's famous campaign slogan "we have Al Quada on the run" was very profitable (read war profiteering). The billions accumulate so fast.

When Obomba and then-SOS Hillary staged "military" raids in Libya and offed Khadafi, they gained access to the National Bank of Libya. (No paper money there---just solid gold bars. Solid Gold. Not the Chinese tungsten filled bars flooding the market.)

That's over and above the $6 billion missing from the State Dept under Hillary's watch. Plus the $100 million Bill pocketed (Dept of State allocation meant for Haiti---where the Clintons spent their honeymoon).

John McCain involved from the beginning. The republicans are covering for McCain as he has made them the scapegoats.

15 posted on 09/24/2014 11:49:45 AM PDT by Whenifhow
[ Post Reply | Private Reply | To 13 | View Replies]
To: afraidfortherepublic; GeronL
In his March 2011 address to the nation, Barack Obama laid out the case for America’s surprise military intervention in Libya. “We knew that if we . . .waited one more day,” said Obama, “Benghazi, a city nearly the size of Charlotte, could suffer a massacre that would have reverberated across the region and stained the conscience of the world.” Two days earlier in a radio address, Obama used the word “bloodbath” to describe Benghazi’s likely fate at the hand of strongman Moammar Qadaffi.

And yet we saw a bloodbath in Iraq and Syria long before the journalists were beheaded and Obama did jack squat.

Obama lied, it wasn't about "genocide" and "carnage". It was about toppling Gaddafi and other leaders in the Middle East.

FYI Kadaffi financed the black Muslim street gang that controlled the community 0 organized domestic terrorism adventure. ( Domestic terrorism-gun running activities)
The half bro Of Jesse Jackson , Noah Robinson, is doing life for his involvment with the gang. That’s Robinson as in Michelle R.O.
Could getting rid of Kadaffi have to do with blackmail? Did kadaffi have “something” on Obama?

1. Slick Willy & Wesley Clark is the reason for the muzzies’ overrun/”invasion” of the whole Europe giving them the opportunity trying establish worldwide Caliphate, not only there but also HERE. Killary is in this “card-game” to cover up for Slick Willy

2. Soebarkah has illegally, by falsehood, turned NATO into an attack force, so HE can wash his murderous hands, with blood, like Pilatus (Pilate) did killing Jesus. That falsehood cost four (4) Americans their lives when the Benghazi turned into a cover-up of illegal gun-running operation that makes Holder’s F&F pale in comparison. It now is the origination of present IS, ISIS, ISIL setting the whole Middle East on fire and world in total chaos. Soetoro is the one who should be charged internationally instead of Milosevic. We’re being totally screwed by his puppet masters Rothschild/Soros and other hidden greedy “enterprises”!!!