China has moved a step closer to creating a supersonic submarine that could travel from Shanghai to San Francisco in less than two hours.

New technology developed by a team of scientists at Harbin Institute of Technology's Complex Flow and Heat Transfer Lab has made it easier for a submarine, or torpedo, to travel at extremely high speeds underwater.

Li Fengchen, professor of fluid machinery and engineering, said the team's innovative approach meant they could now create the complicated air "bubble" required for rapid underwater travel. "We are very excited by its potential," he said.

Water produces more friction, or drag, on an object than air, which means conventional submarines cannot travel as fast as an aircraft.

However, during the cold war, the Soviet military developed a technology called supercavitation, which involves enveloping a submerged vessel inside an air bubble to avoid problems caused by water drag.

A Soviet supercavitation torpedo called Shakval was able to reach a speed of 370km/h or more - much faster than any other conventional torpedoes.

In theory, a supercavitating vessel could reach the speed of sound underwater, or about 5,800km/h, which would reduce the journey time for a transatlantic underwater cruise to less than an hour, and for a transpacific journey to about 100 minutes, according to a report by California Institute of Technology in 2001.

However, supercavitation technology has faced two major problems. First, the submerged vessel has needed to be launched at high speeds, approaching 100km/h, to generate and maintain the air bubble.

Second, it is extremely difficult - if not impossible - to steer the vessel using conventional mechanisms, such as a rudder, which are inside the bubble without any direct contact with water.

As a result, its application has been limited to unmanned vessels, such as torpedoes, but nearly all of these torpedoes were fired in a straight line because they had limited ability to turn.

Li said the team of Chinese scientists had found an innovative means of addressing both problems.

Once in the water, the team's supercavitation vessel would constantly "shower" a special liquid membrane on its own surface. Although this membrane would be worn off by water, in the meantime it could significantly reduce the water drag on the vessel at low speed.

After its speed had reached 75km/h or more the vessel would enter the supercavitation state. The man-made liquid membrane on the vessel surface could help with steering because, with precise control, different levels of friction could be created on different parts of the vessel.

"Our method is different from any other approach, such as vector propulsion," or thrust created by an engine, Li said. "By combining liquid-membrane technology with supercavitation, we can significantly reduce the launch challenges and make cruising control easier."

However, Li said many problems still needed to be solved before supersonic submarine travel became feasible. Besides the control issue, a powerful underwater rocket engine still had to be developed to give the vessel a longer range. The effective range of the Russian supercavitation torpedoes, for example, was only between 11 km and 15 km.

Li said the supercavitation technology was not limited only to military use. In future, it could benefit civilian underwater transport, or water sports such as swimming.

"If a swimsuit can create and hold many tiny bubbles in water, it can significantly reduce the water drag; swimming in water could be as effortless as flying in the sky," he said.

Besides Russia, countries such as Germany, Iran and the United States have been developing vessels or weapons using supercavitation technology.

Professor Wang Guoyu, the head of the Fluid Mechanics Laboratory at Beijing Institute of Technology who is leading another state-funded research project on supercavitation, said the global research community had been troubled for decades by the lack of innovative ideas to address the huge scientific and engineering challenges.

"The size of the bubble is difficult to control, and the vessel is almost impossible to steer," he said. While cruising at high speed during supercavitation, a fin could be snapped off if it touched the water because of the liquid's far greater density.

Despite many scientists worldwide working on similar projects, the latest progress remains unclear because they are regarded as military secrets.

Wang, a member of the water armament committee of the China Society of Naval Architects and Marine Engineers, said even he had been kept in the dark about recent supercavitation developments in China.

"The primary drive still comes from the military, so most research projects are shrouded in secrecy," he said. 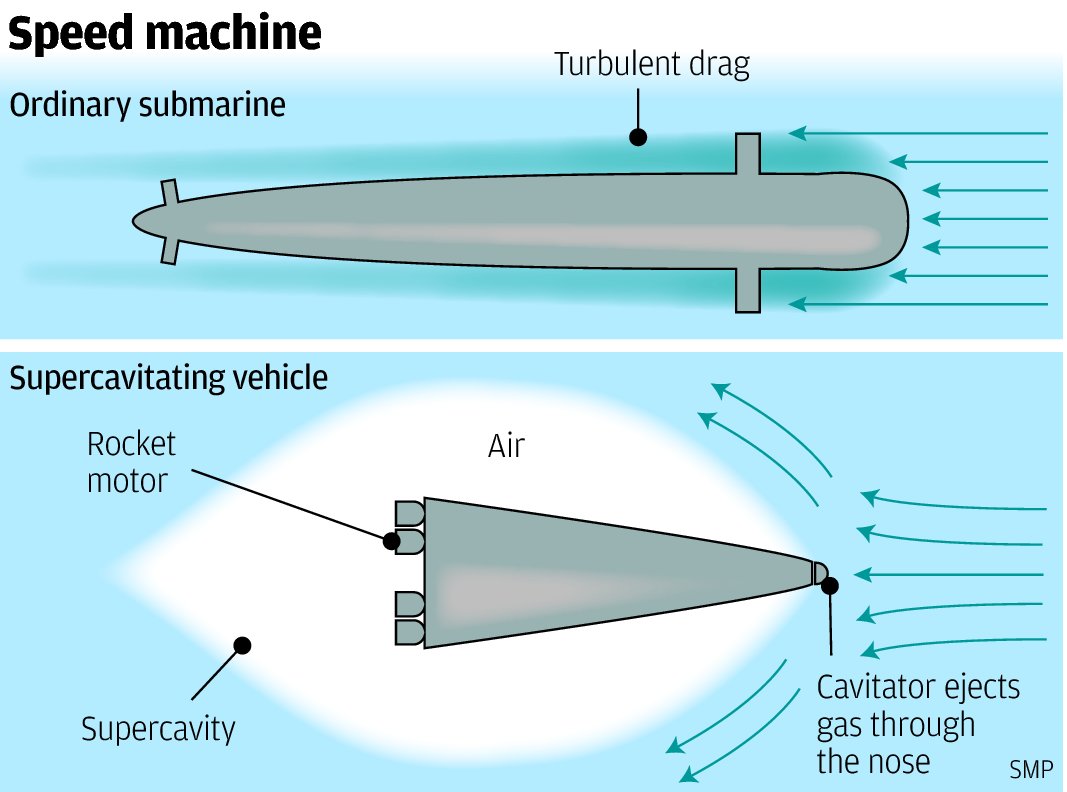 Watch out for those whales.

But what about the whales and dolphins?

That was my first thought. It would be like hitting a moose doing 90 mph.

I believe H&K has a Spec Op’s underwater pistol firing a bullet designed to create a supercavitation bubble thereby permitting it greater range than an ordinary bullet fired underwater.

LOL the Chinese are usually relatively sane even with their grand plans but this is Iran level stupid.

Ejecting gas through the nose (or mouth) thereby creating bubble of surrounding air, and a super cavity in its wake... Obama?

Basically, the equivalent of a sub-space bubble allowing the Enterprise to travel at warp speed...

If the sub is under water there must be a source for the gas to be ejected from the nose?

What am I missing here ?

My first thought was about how a guided torpedo at those speeds means whatever you shoot at is dead with no recourse. Now a military submarine using the tech might be questionable since I cannot imagine this permits one iota of stealth (or detection outside the bubble for that matter).

Explosions underwater are already worse than in air due to the containment provided by the water. If you can lob a high supersonic torpedo at a carrier from range, it is dead - just plain, no bones about it dead. If you can get the range on such a torpedo up to maybe 100 miles or so, no surface vessel is safe.

This tech has very disturbing possibilities when it comes to the balance of sea power.

Sorry, I couldn't help myself.

All this courtesy of the technology stolen from the US,Britain,Germany and Japan.Remember,boys and girls...every single Chinese diplomat,businessman,student and tourist in an industrialized country is engaged in *some* kind of spying,either industrial,diplomatic or military.

Thanks to our enlightened leadership, the US doesn’t need to waste resources on such ‘bleeding edge’ defense technologies.

Our superior diplomatic response allows the apologizer-in- chief to maneuver through international incidents with mere token military response, ‘leading from behind’ in dear leader’s words.

By allowing aggressive nations/factions to pursue their cultural goals free from US oppression, Hussein I frees up much needed military resources for the war on America at home, including those dratted right wing terrorists.

What do you call a supercavitating submarine that collides with a whale, dolphin, shark, or big grouper?

Financed by trade surpluses with the US and other developed nations over the past few decades. Not to mention untold amounts of reverse engineered technology and technology stolen by various other means.

It would be a MAD type scenario because you would know the firing point and be able send a response torpedo towards it.