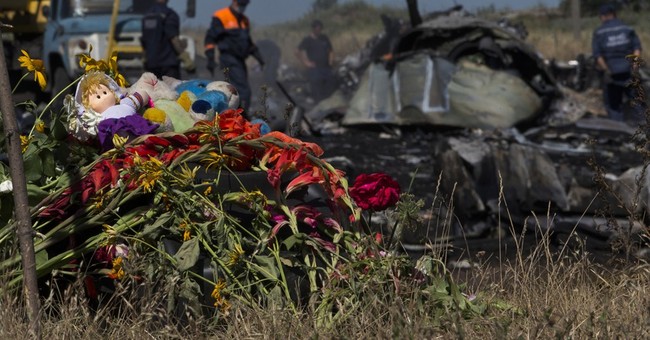 Just days after the tragic crash of a Malaysian Airlines flight over eastern Ukraine, Western politicians and media joined together to gain the maximum propaganda value from the disaster. It had to be Russia; it had to be Putin, they said. President Obama held a press conference to claim - even before an investigation - that it was pro-Russian rebels in the region who were responsible. His ambassador to the UN, Samantha Power, did the same at the UN Security Council - just one day after the crash!

While western media outlets rush to repeat government propaganda on the event, there are a few things they will not report.

They will not report that the crisis in Ukraine started late last year, when EU and US-supported protesters plotted the overthrow of the elected Ukrainian president, Viktor Yanukovych. Without US-sponsored "regime change," it is unlikely that hundreds would have been killed in the unrest that followed. Nor would the Malaysian Airlines crash have happened.

The media has reported that the plane must have been shot down by Russian forces or Russian-backed separatists, because the missile that reportedly brought down the plane was Russian made. But they will not report that the Ukrainian government also uses the exact same Russian-made weapons.

They will not report that the post-coup government in Kiev has, according to OSCE monitors, killed 250 people in the breakaway Lugansk region since June, including 20 killed as government forces bombed the city center the day after the plane crash! Most of these are civilians and together they roughly equal the number killed in the plane crash. By contrast, Russia has killed no one in Ukraine, and the separatists have struck largely military, not civilian, targets.

They will not report that the US has strongly backed the Ukrainian government in these attacks on civilians, which a State Department spokeswoman called "measured and moderate."

They will not report that neither Russia nor the separatists in eastern Ukraine have anything to gain but everything to lose by shooting down a passenger liner full of civilians.

They will not report that the missile that apparently shot down the plane was from a sophisticated surface-to-air missile system that requires a good deal of training that the separatists do not have.

They will not report that the separatists in eastern Ukraine have inflicted considerable losses on the Ukrainian government in the week before the plane was downed.

They will not report how similar this is to last summer's US claim that the Assad government in Syria had used poison gas against civilians in Ghouta. Assad was also gaining the upper hand in his struggle with US-backed rebels and the US claimed that the attack came from Syrian government positions. Then, US claims led us to the brink of another war in the Middle East. At the last minute public opposition forced Obama to back down - and we have learned since then that US claims about the gas attack were false.

Of course it is entirely possible that the Obama administration and the US media has it right this time, and Russia or the separatists in eastern Ukraine either purposely or inadvertently shot down this aircraft. The real point is, it's very difficult to get accurate information so everybody engages in propaganda. At this point it would be unwise to say the Russians did it, the Ukrainian government did it, or the rebels did it. Is it so hard to simply demand a real investigation?

If those in charge of governance in the territory once known as “the United States of America” should have learned ANYTHING over the past five and a half years, it is that “regime change” is a loser for them every time. It was not even that much of an advantage for George W. Bush, and the prospects did not improve when the “reformers”, with their Alinsky agenda, swept into office in 2008. It did not work with Libya, where everything went horribly sideways at Benghazi, it did not work in Egypt, which saw a total reversal of the outcome desired most by the Current Regime, and it has no positive effect in Syria, where the attempted “regime change” has degenerated into an endless civil war. Even in Iraq, the attempts to destabilize the Nouri Al-Maliki government seem to be proceeding very well, the probable successor is a much more “efficient” form of Sunni theocracy, which appears determined to establish the core of a new Caliphate.

And now what has been more and more, first alluded to, then openly revealed, the intrigues and unorthodox methods of overthrowing what had been a relatively stable and economically viable state, recovering from the ravages of currency manipulation on a massive scale, was converted into a battleground, which greatly sharpened the appetite of the lurking Russian Bear for a territorial reconquest.

The “Red Shield” (Rothschilds) were pikers and almost benevolent in comparison.

In 1988 the USS Vincennes, a guided missile cruiser, entered Iranian territorial waters and spotted an aircraft that it thought was an Iranian F-14 fighter plane. However, it was actually a civilian Iran Air Airbus A300, flying over Iran’s territorial waters on its regular route from Tehran to Dubai in the United Arab Emirates. The Vincennes fired a surface-to-air missile that destroyed the plane, killing all 290 onboard. Under a 1996 agreement at the International Court of Justice, the U.S. agreed to pay Iran $61.8 million.

5 posted on 07/22/2014 5:21:04 AM PDT by FR_addict
[ Post Reply | Private Reply | To 1 | View Replies]
To: Kaslin
So I guess Ron Paul has already forgotten the tweet of the Russian commander on the ground there in Donetsk as the MH17 was falling from the skies: "that will teach you to fly in our skies".

Ron Paul is a mindless moron --

The rebels have not air support (yet), so the premise would not just be that Ukraine accidentally shot down an airliner, but rather purposefully targeted it. Although a Russian/separatist downing does help Ukraine's case against Russia, getting caught in such a cynical scheme, like that suggested, would totally destroy their support. And there are enough Russian intel assets to make getting caught very possible.

This also did not happen in an historical vacuum. When a rabbit, a goat, and a hyena share space and the rabbit goes missing, I don't stop and think about whether the goat is just trying to make the hyena look bad.

What does that have to do with Russia’s invasion of Ukraine and their men shooting down a commercial airliner at 33,000 feet for no reason?

I think you have Ron Paul confused with Rand Paul. Rand is the son and Ron is the Father. So in effect you are saying that Ron Paul is showing his own influence.

Ron Paul is an isolationist. Rand Paul is not quite the isolationist as his father but not far from him.

The story is not quite simple in Ukraine, there are definitely pro Russians and anti Russians. The election of the Pro Russian was orchestrated by Russian and there were many, many accusations of Russian interference and ballot box stuffing in the election. The Pro Russian President was making moves to have Ukraine annexed by Russia so naturally the anti-Russian citizens revolted.

Now you know the rest of the story.