Bill and Hillary Clinton are using perfectly legal, but complex and expensive legal strategies available only to the rich in order to avoid the estate taxes they have assured us are essential to fairness and economic justice. So much for the crusade against the 1% who are supposedly responsible for all the ills of everyone else.  Keeping Chelsea a wealthy member of the 1% is the apparent goal.

Bill and Hillary Clinton have long supported an estate tax to prevent the U.S. from being dominated by inherited wealth. That doesn’t mean they want to pay it.

To reduce the tax pinch, the Clintons are using financial planning strategies befitting the top 1 percent of U.S. households in wealth. These moves, common among multimillionaires, will help shield some of their estate from the tax that now tops out at 40 percent of assets upon death.

The Clintons created residence trusts in 2010 and shifted ownership of their New York house into them in 2011, according to federal financial disclosures and local property records. (snip)

“The estate tax has been historically part of our very fundamental belief that we should have a meritocracy,” Hillary Clinton said at a December 2007 appearance with billionaire investor Warren Buffett, who supports estate taxes and is using charitable donations to reduce his eventual bill.

It’s the middle sized guy who, again, gets squeezed. The one too poor to create the shelters, but too rich to escape visibility by Uncle Sam.

Hillary connivingly planned to campaign on "income inequality" .......running as a phony populist. Campaign strategists warned Hillary her "tone" is important.....(so she can better dupe the voters).

Reminded me of the classic Willam Castle horror movie, "Mr Sardonicus," (whose face becomes frozen in a horrifying grin while robbing the coffin of his father's grave). 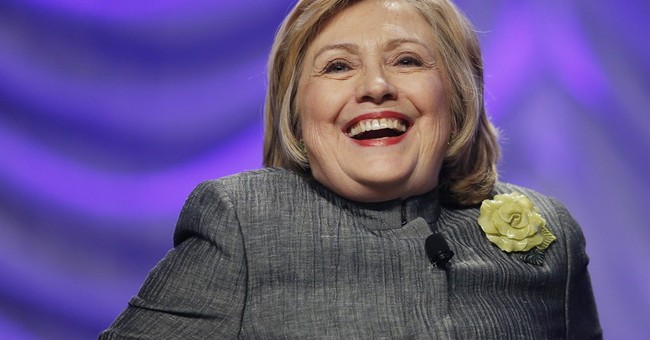 The only "good" thing to come out of Hillary's disastrous book tour is the new campaign cry: "Another Clinton administration? Are you nuts."

(Cackle) Will look nice on a bumper sticker.

DUDESTER VIETOR offered up a truly laughable assesment of Hillary''s hellish book tour. “The Secretary enjoyed spending this week talking about 'Hard Choices' and working with President Obama to restore America’s leadership in the world,” he said in an email. “She’ll continue to be relaxed, candid and direct.”

Must be auditioning for a SNL job--producing comical skits.

3 posted on 06/18/2014 6:35:29 AM PDT by Liz (Another Clinton administration? Are you nuts?)
[ Post Reply | Private Reply | To 1 | View Replies]
To: All
As Hollywood hotshots protest the Beverly Hills Hotel over its ownership by Brunei's sultan and his embrace of Sharia law, it turns out the Brunei government has financial connections to "The Clinton Foundation."

The tax-exempt, nonprofit Clinton foundation lists Brunei along with Kuwait, Oman and Qatar (new home of the Gitmo Five) as donors that gave between $1 million and $5 million through last year.

The Clinton foundation itself confirmed the 2002 Brunei donation: "The Clinton Foundation's impact would not be possible without the generous support of our donors," the foundation's website reads. "Their contributions have made a difference in the lives of tens of millions across the world." Read more at foxnews.com ...

BACKSTORY Billy Boy Clinton was grinning like a simpering fool at the annual meeting of the tax-exempt "Clinton Global Initiative" foundation....even Obama was there hugging Billy like they were old pals.....all in the wake of the bombshell news that:

THE CLINTON FOUNDATIONS / MUSLIM TERRORISM CONNECTION --- The recent story that a Muslim terrorist was working at the Clinton Foundation AND conducting terrorist activities at the same time, explains why the Clintons just remade themselves into the hallowed "Clinton Family Foundation."

The Clintons bagged millions in kickbacks from the Red Chinese for Loral Space technology, paid for by American tax payers. There's the $350Million the Chinese government gave their "foundation" for "favors" Mr. Clinton performed for the Chinese (technology transfer), and you have quite a pile of illicit money.

THE HARRY REID CONNECTION---There's also a Harry Reid connection to the tax-exempt "Clinton Global Initiative" one of the three Clinton foundations.

PUT ON YOUR TINFOIL HATS TO CONNECT THE DOTS:

(1) Harry Reid's son Rory is in business w/ the Chi/Coms on a multi-billion dollar solar energy project; Cliven Bundy and his land are standing in the way.

(3) The "Clinton Global Initiative" (NOT KNOWN for giving out grants)---gave Harry Reid's granddaughter a grant for a Brooklyn, NY theatre she runs (what is a Brooklyn theatre's connection to "global initiatives?")

"Money laundering" comes to mind. Could the Chinese be financing the Reid's solar project through donations to the Clinton Foundations....which is then laundered to Reid's granddaughter?

REFERENCE----HARRY REID IS LIVID THAT HIS GRAND-DAUGHTER HAS BEEN OUTED AS A RECIPIENT OF LAUNDERED CAMPAIGN CASH---Reid lashed out at reporters, saying, “My granddaughter has been the target of harassing phone calls, strangers tracking her down, knocking on her door and negative, unwanted attention on the Internet.” “This has gone too far and it needs to stop now,” Reid said. “I deeply regret any role I had in creating this situation but now, as a grandparent, I say enough is enough.”

Besides the "jewelry company" financed by her grandfather, Ryan Elisabeth Reid runs the Sprat Theater Company, a small theater in Brooklyn, which is also coming under scrutiny. According to Sprat’s Theatre Company Web site, it has received grants/contributions from:

NOTE NV Energy Foundation---is a non-profit division of NV Energy (a public utility). The NV Energy utility is a subsidiary of MidAmerican Energy Holdings Company which took over in 2013....and is now owned by a Warren Buffet unit.

BTW, here's Harry w/ his grand-daughter....the one who got $31,000 in laundered campaign funds for her "jewelry company" and grants from Clinton and Nevada energy foundations.

there is no reason whatsoever the govt should get part of an estate that was earned thru a lifetime of savings. if I want to pass it to my kids, under what pretense does the fedgov have any claim to it?

As far as I am concerned the Estate tax is nothing more than the last chance to let the government steal your life’s earnings.

Build up a farm or business and they’ll take it away from your heirs... unless you jump through the hoops to ‘protect’ it from them.

It’s all about screwing the other guy. You know damn well they are taking FULL advantage of any planning techniques to maximize their rise from “practically broke” (or whatever it was) to multi-millionaires. My, oh my, such a coincidence.

As long as people are BUYING such nonsense, politicians will succeed in SELLING it.

The people could probably be pressed to confess that yes, this might look a bit abusive, but who are they going to complain to since God is not in view?

Pride and greed. The government should be a tenth as big as it is... maybe.

The Clintons did a good job over the past decade of trying to get people to forget how greedy, money-grubbing and hypocritical they were on personal finance issues. However, they did not change their ways and for some surprising reason, the media is pointing it out.

All the mega-rich have a choice to make, either PRETEND to want higher taxes to be “fair” and have the press leave them alone if not outright burnish their character as “good”, or be like the Koch brothers and have the Majority Leader of the Senate brand them as terrorists.

I wonder sometimes, how does a walking, talking fece like Reid get elected and re-elected year after year?

Unions and the mob in Las Vegas. Including that pussy boy Wayne Newton. Why anyone would attend his never-ending and moronic show I cannot imagine.

Their easily refuted reasoning is that this creates wealth stratification where one family keeps all their wealth for generations.

In reality, over 80% of millionaires are first generation,
and most inherited wealth is gone within one generation and in rare circumstances it might last two generations.

14 posted on 06/18/2014 6:49:23 AM PDT by MrB (The difference between a Humanist and a Satanist - the latter admits whom he's working for)
[ Post Reply | Private Reply | To 5 | View Replies]
To: SeekAndFind
When Rose Kennedy,the "matriarch" of the filthiest family in America,died her son,the Senior Senator from Cahappaquidick,was the executor of the estate.One of the first things he did as executor was file her will for probate in Florida.However,she hadn't set foot outside of Massachusetts for the 11 years immediately preceding her death.Why is this noteworthy? Because at the time Florida had *no* state death tax while Massachusetts had a *huge* one.

Death taxes for thee,but not for me.

16 posted on 06/18/2014 6:51:34 AM PDT by Iron Munro (The Obamas' Black skin has morphed into Teflon thanks to the Obama Media)
[ Post Reply | Private Reply | To 1 | View Replies]
To: SeekAndFind
Warren Buffett, who supports estate taxes and is using charitable donations to reduce his eventual bill.

Of course he does, he's invested in insurance, that's what huge estates use to pay the death tax.

Because they’ve dedicated their lives to servicing the public.

Thanks to decades of hard work and self denial my father was rather comfortable during the last 40 or so years of his life (my mother died 40 years before him).My Dad was a child of the Depression,and one of 8 children of a man crippled by TB and,as a result,he grew up in the filthiest Irish ghetto of Boston,"Southie".And while he was growing up one could routinely see signs in the windows of Boston "no Irish need apply".His older brother,particularly,used to speak often about that.