The biggest scandal in today's release of Hewlett Packard Q2 earnings was not that it hit 30 minutes prematurely, catching algos unaware and unable to BTFD when the stock tumbled on what was a revenue miss and 1% decline from last year, nor that the company guided below estimate, pushing its stock some 3% lower in the last minutes of trading.

The biggest scandal was this disclosure in the second quarter results press release: "As HP continues to reengineer the workforce to be more competitive and meet its objectives, the previously estimated number of eliminated positions will increase by between 11,000 to 16,000." This is in addition to the 34,000 layoffs already noted previously, meaning HP will fire a total of 50,000 in the near future.

Want to know why HPQ is forced to fire so many well-paying jobs it once again makes a mockery of anyone who claims there is some economic recovery going on?

The chart below, which compares the company's quarterly CapEx, declining (so no, not increasing as some clueless sellside analyst hacks claim) by 16% from last quarter and down 4.5% from a year ago to $840 million and thus leading to less growth opportunities for the company and resulting in tens of thousands of pink slips, and the soaring amount of stock buybacks, which rose by nearly 50% in Q2 from Q1 to $831 million and by 27,600% (!) from a year ago, the most since 2011, should provide all the answers.

So dear soon to be laid off Hewlett Packard employees, if you want to direct your anger somewhere, please direct it at the company's "activist" shareholders who have forced management to invest not in growth for the future, and thus you,

The name HP used to bring visions of the world’s best test and measurement equipment.

Now it is used on printers and ink. Agilent is hanging in there...but why give the good name away?

Thanks, oh sales wench - Carly Bimbo - who used the world’s best name for disposables, while watching the production of things she could never operate, let alone understand decrease, decrease, and decrease.

HP is a dead company walking.

High ink prices are not a long term business plan for success.

HP has been pretty much a corpse of a company since 2008, pretty much self inflicted. Microsoft had nothing to do with it.

And piece of Crap printers and scanners at that.

They couldn’t write software to save their lives.

I gave up on HP long ago

Another PC corporation from Kalipornia dying?

I’ll never buy anything from HP.

HP bought Compaq who previously bought Digital. I worked for Digital and lost my job because of it. 20 years and I’m still cheesed.

I have bouts of HP driver weirdness on random printers at my facility. Almost all in the newer models. The 4000s and other vintage ones run fine.

A lot of people at my place of employment know me as the guy who hates printers. I don’t have a lot of love for the 170 XIII Zebras either but they don’t flake out anywhere near as much.

I will not have another HP anything personally.

For home I have a BW Brother printer scanner and my wife inherited my 7 or 8 year old Epson 595 that is still going strong. When it dies or the ink just gets unreal (which isn’t that far off), I will get a color laser. It won’t be an HP.

Amen to the Brother products, thats where Im at too.

HP also loads their driver software( at least used to) with malicious mal-ware that gets dumped all over your OS when you try to load drivers to fix their garbage printers / scanners. Good luck getting rid of it.

I bought my Lexmark Optra laser printer in the summer of 2000. It still runs perfectly. Both Win 7 and Macintosh found and loaded drivers instantly.

We were recently terminated from selling HP Ink Cartridges because our volume purchased with other office supplies through our distributor wasn’t high enough.

However, they would allow us to continue selling a line of printers.

Somehow the logic escaped them of why I would sell a printer I couldn’t sell ink cartridges for. When I asked the question I basically got an answer of “Duh, I dunno”

My HP printers are still working years later. No problems at all.

The current CEO, Meg Whitman, is worthless as well. 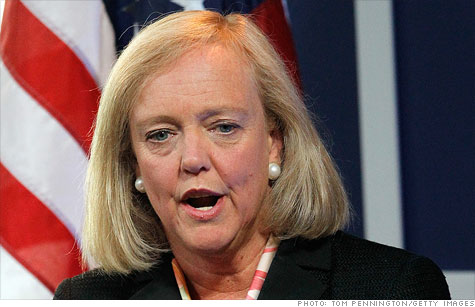 One of HP’s biggest faults is their overwhelming and excessive investment in overseas labor. You have >90% chance of getting someone in India and >95% chance of just getting someone overseas when you call for support. They have very few infrastructure engineers in the US anymore, and that saved them money initially; however, as time has consistently played out since the late 90s, outsourcing critical infrastructure personnel such as your engineers is 100% foolhardy.

I used to be one of their biggest champions, esp. for their hardware. I supported their ProLiant-class server hardware from the old Compaq days all the way through the latest generations. The platform is solid, but they’re not innovating. They’re stagnant, and companies like Cisco are designing integrated hardware platforms now (i.e. UCS) that provide packaged-deal pricing for much less than HP’s CTO or package prices provide.

HP will go down in history as a lesson to all future corporate bigwigs: try to overwhelm or silence your competition, try to buy them out and scuttle their brand through attrition, and the market will respond by out-innovating you.

HP is right up there with Microsoft on my loathe list. I have a HP printer that purely sucks. Worst of all it will not accept refilled cartridges so I’m stuck subsidizing their incompetence.