To adapt H.L. Mencken, nobody ever went broke underestimating the cynicism and self-dealing of the American political class. Witness their ad-libbed decision, at the 11th hour and on the basis of no legal authority, to create a special exemption for themselves from the ObamaCare health coverage that everybody else is mandated to buy.

Senator Vitter of Louisiana was on WMAL this morning and noted that most of the usual suspects who made this quiet deal with Obama got out of town fast on Friday before the news dump.

Hello, Republicans? You up there?

It’s your FRICKIN’ job to handle this. 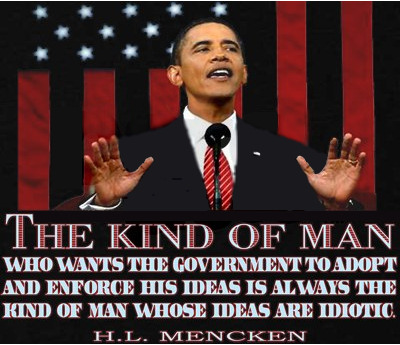 This and Obama’s one year delay of the employer mandate are both illegal. Why isn’t someone challenging this in court? I have given up on the GOP instead of fighting Obama’s unconstitutional power grabs they just roll over.

It is ILLEGAL for the President to waive what has been written into law.

Somebody ought to bring a lawsuit to the courts and take it as high up as it can go ( I’d like to hear what John Roberts has to say about it this time ).

Some animals are more equal than other animals.

John Roberts is not about to raise a pip.

Yeah I thought that too.

But guess what judge will say... “you have not been harmed so you do not have standing”

or some other delay.

Nobody is watching the store - and if they are, they’re allowing it to be looted.

RE: John Roberts is not about to raise a pip.

I WANT IT ON RECORD THOUGH.

So, WHO will bring the lawsuit?

Politicians in the USSR had were special also ,they even had their own Supermarkets

RE: you do not have standing

If the GOP had balls, they Congressmen can band together and bring the suit up ON BEHALF OF THEIR CONSTITUENTS.

Screw it all, I’m not paying sh!t. I don’t own anything they can take so F the whole game, I ain’t playing.

14 posted on 08/05/2013 7:37:56 AM PDT by PeteePie (Righteousness exalts a nation, but sin is a reproach to any people - Proverbs 14:34)
[ Post Reply | Private Reply | To 2 | View Replies]
To: SeekAndFind
If the GOP had balls, they Congressmen can band together and bring the suit up ON BEHALF OF THEIR CONSTITUENTS.

Not bloody likely; the GOP wants this special-status just as much as the Democrats, just like the IRS/NSA they don't want these problems addressed because that would mean losing these "political tools" should they ever regain power.

Obama. The “Make it so” President.

“But guess what judge will say... “you have not been harmed so you do not have standing””


Only a 100% corrupt legal system filled with people trained for years by communists in law school allows such a ruling to take place.


ANY Constitutional law question affects every citizen (sorry Seattle real citizens do exist) as the constitution is for everyone.

Giving an exemption to the minions working for the ruling elite only means everyone else will have to pay more so it directly affects everyone of us.

The only people who should be denied a hearing before the USIC (United States Inferior Court) would be non-citizens. Every citizen has standing on every issue before the USIC.

They don’t want to be bothered with it. They just want their fat salaries, insider trading leads and freebie benefits and go home.

We truly don’t have a representation at this point.

18 posted on 08/05/2013 7:41:12 AM PDT by autumnraine (America how long will you be so deaf and dumb to thoe tumbril wheels carrying you to the guillotine?)
[ Post Reply | Private Reply | To 6 | View Replies]
To: SeekAndFind
Welcome to the First Galactic Empire.

"We stand on the threshold of a new beginning. In order to ensure our security and continuing stability, the Republic will be reorganized into the first Galactic Empire, for a safe and secure society, which I assure you will last for ten thousand years. An Empire that will continue to be ruled by this august body and a sovereign ruler chosen for life." ―Emperor Palpatine, in his Imperial Inaugural Address[src]

r we just going to let this happen