This Saturday will be the most important primary vote of the year. Either conservatives and Tea Party members unite to stop Mitt Romney or we see a repeat of 2008, with a liberal Republican going up against Barack Obama.

I am calling on conservatives and members of the Tea Party movement to unite behind Newt Gingrich in South Carolina so that we can stop Mitt Romney.

I like Rick Perry. If Newt were not in the race, I would be behind Perry. But Perry’s campaign is on its last legs. Nationally Perry is at only 7% and is less than that in South Carolina. After the primary vote on Saturday, Perry’s campaign will more than likely end.

Rick Santorum is polling well but he has problems. Since he focused so intensely on Iowa, he does not have campaign infrastructure in many states. In fact, there are a number of states where he will not even appear on the ballot. In other states, like my home state of Tennessee, his name will appear but he has no delegates who have qualified for the ballot. What that means is that even if Santorum were to win Tennessee, he would get no delegates for the convention.

Santorum is not on Virginia’s ballot and according to the Chicago Sun-Times, he has been challenged in Illinois and will probably not be on that ballot. In Ohio, Illinois (even if he stays on the ballot), and DC, he does not have a full slate of delegates.

In short, Santorum, just due to campaign limitations, cannot stop Romney. All he can do by staying in the race at this point is to continue to divide the conservative vote.

I am asking every conservative and Tea Party member to unite now behind Newt Gingrich so that we can stop Mitt Romney and have a conservative nominee for President.

If you want to help, here is what you can do.

If you can go to South Carolina between now and Saturday to help the campaign, please do. Register with the campaign site here.

If you cannot go to South Carolina, you can still help by contacting anyone you know in South Carolina and asking them to go out and vote for Newt. Please forward this email to everyone on your email list and in your Tea Party or Liberty group.

We must all join together and unite now or watch another liberal Republican get the nomination.

There is only one conservative left with a chance to stop the liberal former Governor of Massachusetts, Mitt Romney and then defeat Barack Obama this fall.

Much the same way Herman Cain had from the beginning

At this point in time Newt is the only one who can put the brakes on Mitt. Folks in South Carolina need to vote for Newt as it will help keep the rest of the candidates in the race. Sarah Palin is right on target. GO NEWT GO!

This will hurt him in South Carolina-a RTW State.

It wasn’t that long ago (15 days!) that Santorum effectively won Iowa so I think at this point it is just the usual slowness of reality sinking in. Hopefully he will see the light after he finished 3rd or 4th in SC. But you never know. Is he the guy who said he would pick Newt to be his VP (in on of the earlier debates) or the guy who picked Specter over Toomey?

7 posted on 01/18/2012 12:50:48 PM PST by Jim Robinson (Rebellion is brewing!! Impeach the corrupt Marxist bastard!!)
[ Post Reply | Private Reply | To 1 | View Replies]
To: greyfoxx39; All
Either conservatives and Tea Party members unite to stop Mitt Romney or we see a repeat of 2008, with a liberal Republican going up against Barack Obama.

Go to Newt's site and make phone calls into SC before Sat...... 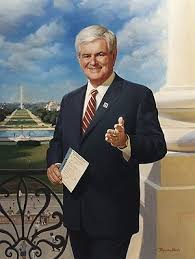 * Voting on each of the Contract with America items

* Unemployment falling to under 4%

At this point you need to NOT insult Santorum voters! Shoot, that is mean. Rick has the right reasons for running and would be better president than Gingrich. Since this thread is asking us to drop our candidate and join yours, you should be at the very least kind to us.

12 posted on 01/18/2012 12:54:28 PM PST by Yaelle
[ Post Reply | Private Reply | To 2 | View Replies]
To: CainConservative
While you make Newt sound like Superman you fail to mention his Kryptonite which will follow him to defeat in the general should he win the primaries . There is the matter of the book deal then the 300k fine then the mutiny in congress then being run out of congress and town with his tail between his legs . Why did he quit ? Aw heck ,forget all that , lets talk about Romney's tax returns. When will Newt release his ? You can be sure there will be more. You do not wallow and contribute to that sewer in washington without without some stink hanging on.
13 posted on 01/18/2012 1:00:59 PM PST by fantom (,)
[ Post Reply | Private Reply | To 8 | View Replies]
To: Yaelle

I am for Santorum let the voters in SC and my State which is next have vote, Our Tea Party is for Rick Santorum.

Conservatives unite to defeat the establishment RINOs and the Marxist!!

Romney is simply a big government, business as usual RINO and that’s why the establishment RINOs are trying to shove him down our throats. They want to hold on to their power!!

The media and the demoncrats love Romney too, because they believe he will lose to the Marxist, and he will.

We are the resistance!!

We are the grassroots!!

Don’t let the establishment and the Marxist have their way with us!!

NOT ON OUR WATCH!!

The Tea Party is correct (Newt 39% .. Willard 21% AND among true conservatives, similar numbers in today’s polling). Palin’s got it right. Todd, too.

Can we count on YOU to stop Willard the Lib in SC? If not, why not?

What proof of that do you have? Post away.

“Our Tea Party is for Rick Santorum.”

So, in other words, you want Romney as our candidate, and another 4 years for OBAMA, right?

It’s time to decide. MY children’s future is at stake.

In other words Santorum has a chance to beat them all.
If you want someone to drop out ask Perry and Ron Paul too accommodate and drop out. The there would be three.