Assemblywoman Hayashi, D-Hayward, was nabbed for pinching $2,500 in merchandise from Neiman Marcus. Normally at Neiman $2,500 might get you a pair of socks and a pocket hankie, so Ms. Hayashi's fingers must have been sticky during a blowout sale since her haul included a pair of leather pants and other pricey items.

What's more frightening: a shoplifter with the power to make laws and spend taxpayer money, or the idea of any member of the state Assembly in leather pants?

When confronted, Ms. Hayashi said she was yakking on her phone and absentmindedly walked out of Neiman without paying for the pants. However, after lawyering up, Mary's story morphed into a whopper even by Sacramento standards.

Hayashi claimed in court her hot pants were the side effects from a brain tumor, not absent-minded dialing while shopping.

Apparently Tim Tebow isn't the only one throwing Hail Marys.

Hayashi's lawyer, Dennis Rappaport, argued the shoplifting incident was an aberration caused by the tumor. Lindsey Lohan should have this guy on speed dial. We're told she has since undergone successful treatment and once again commands the judgment and moral authority to impose her will on the rest of us through the legislative process.

Luckily for Hayashi she only had one of those pesky 24-hour tumors.

Call them cynical but The Sacramento Bee asked Dr. Paul Muizelaar, chairman of neurological surgery at the UC Davis Cancer Centers, if the "tumor defense" is medically possible. Muizelaar acknowledged there are "very rare" types of tumors that can change behavior -- like causing uncontrollable laughter or experiencing smells no one else can smell -- but it's "very unlikely" a tumor could cause someone to shoplift as a side effect.

And here I am worried about four-hour erections.

But apparently this episode of "CSI: Sacramento" was good enough for Judge Gerado Sandoval. He knocked the felony charge down to a misdemeanor and tapped Hayashi's wrist with a puny $180 fine, three years probation and ordered her to stay 50 feet from Neiman -- which should be Nordstrom's cue to beef up security.

You don't need a brain tumor to laugh uncontrollably at this farce. The chair of the California Assembly Business, Professions and Consumer Protection Committee was actually shoplifting clothing from California businesses!

Which, in Mary Hayashi's defense, is a pittance compared to the massive rip-offs routinely inflicted on taxpayers every day.

Doug McIntyre's column appears Wednesdays and Sundays. You can reach him at dncolumnist@dailynews.com.

And again, just for emphasis:

The chair of the California Assembly Business, Professions and Consumer Protection Committee was actually shoplifting clothing from California businesses! 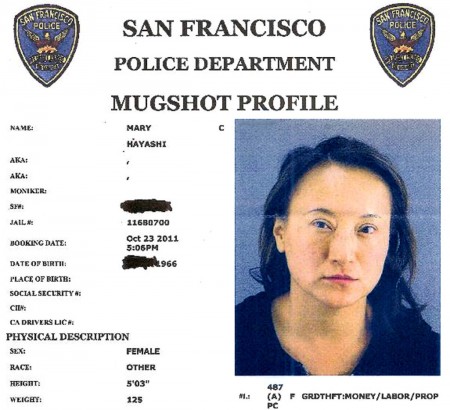 She’s liberal, she’s a good Democrat. I predict that this story disappears from the news, and, that it will never be brought up when she runs for re-election, or seeks election to another office. It will be a non-issue because she is a good Democrat, and the media pick and choose their criteria for judging people and situations.

But just as disturbing is the recent attempt to blame this all on a deeply embedded, non life-threatening, brain tumor. Shame on her, her lawyer and her supporters.

I hate to lend credibility to her story if she indeed does have a brain tumor. I had a boss once that began having unexplained fires. A couple of cars in his driveway burned on several occasions. He was convinced it was one of his employees that was responsible.

He finally caught the guy. It was his son. He had a brain tumor. I would have thought that he would have connected the dots with other odd behavior. The son is fine now and no more fires.

12 posted on 01/15/2012 11:19:50 AM PST by listenhillary (Look your representatives in the eye and ask if they intend to pay off the debt. They will look away)
[ Post Reply | Private Reply | To 1 | View Replies]
To: Grizzled Bear
Yikes! I’m beginning to believe those conspiracy theories about reptillian alien invaders!

“There was a rumor of a tumor.”

It's where the controlling government employees shop and steal as they collect their tax paid wages, top shelf benefits, and lottery style tax paid retirement pensions.

I can go you one better. There is a female judge in NJ who shoplifted a couple of watches and blamed it on “ungodly vaginal itch.”

I see that she died last year, killed in a auto accident.

I wonder if she was distracted by her itchy cootchie.

Liberals and lawyers, when in doubt, blame some outlandish "malady" for your crime .

Is Edwards taking a page from Fred Sanford?

Sanford And Son: This Is The Big One!

Hear that Elizabeth? I'm coming to join you!

Apparently, she’s had a lot of problems, a car accident among them, but I don’t think she died:

“Among the other reasons the Judge lifted the two watches, according to a Star-Ledger report: menopausal hot flashes, a bad rash, a toilet that would “not stop flushing,” problems with a wallpaper job that caused her to file a lawsuit, proposed dental surgery, preparations for her parents wedding anniversary, Thanksgiving dinner (she had twenty guests), holiday shopping (she needed to buy 200 gifts), a traffic accident that caused her to miss two weeks of work and buy a new car, and selling her house without the services of a realtor.”

I know a toilet that would not stop flushing would push me over the edge — that and a bad wallpaper job.