Zagreb/Belgrade 4 Aug. (AKI) - Croatia on Thursday celebrated the 16th anniversary of military operation “Storm” which crushed a Serb rebellion and sparked exodus of some 200,000 Serbs, while Serbia commemorated victims of what it calls the worst ethnic cleansing in Europe after World War Two.

Croatian Prime Minister Jadranka Kosor said operation “Storm” was a “brilliant military action” and a great victory which re-united the country. “The Day of Victory we celebrate in peace and freedom, taking our place in the European family of states and nations,” Kosor said.

Serbiaian president Boris Tadic said the anniversary was a date of “sorrow and remembrance”. Justice has been partly served by the fact that Gotovina and Markac were in jail, but a lot more remained to be done, he added.

Tadic attended a commemoration in Belgrade’s St. Mark church for the victims of the operation “Storm”. Religious rites were held by the head of the Serbian Orthodox Church patriarch Irinej.

Croatian forces launched an offensive on self-proclaimed Republic of Serb Krajina on August 4, 1995 and in only two days re-conquered a third of its territory held by local Serbs who rebelled against Croatia’s secession from the former Yugoslavia.

According to Serbian sources, 1,205 civilians, including 522 women and 12 children, were killed in the operation and some 200,000 fled to Serbia. According to Croatian Helsinki Human Rights Committee, 677 Serb civilians were killed.

The United Nations War Crimes Rribunal for the former Yugoslavia last April sentenced two Croatian generals, Ante Gotovina and Mladen Markac, to 24 and 18 years in jail respectively for crimes committed in the operation.

According to the indictment, they were a part of a “joint criminal enterprise”, headed by late Croatian president Franjo Tudjman, aimed at expelling minority Serbs from the country. Gotovina and Markac have appealed the sentence.

Croatia is expected to join the European Union in 2013, but Belgrade insists Zagreb should first facilitate the return of refugees, resolve their property claims and create conditions for normal integration into society.

I can’t imagine why any Serb would even consider returning? Why? So you can wait until the next massacre?

3 posted on 08/04/2011 3:29:20 PM PDT by FormerLib (Sacrificing our land and our blood cannot buy protection from jihad.-Bishop Artemije of Kosovo)
[ Post Reply | Private Reply | To 2 | View Replies]
To: FormerLib; Diocletian

I can remember when Diocletian would refer to Gen. Gotovina as “a hero.”

4 posted on 08/04/2011 5:03:16 PM PDT by LjubivojeRadosavljevic
[ Post Reply | Private Reply | To 3 | View Replies]
To: Ravnagora
Croats (Catholic), Serbs (Orthodox) and Bosnians (Muslims) all speak the same language. They hate each other with a burning passion. With the exception of Poland, Yugoslavia had the worst ethnic violence during WWII of any country. Solution, segregate, build fences, let people develop a sense of security.

Germany and France had 3 major wars over a period of 70 years (Franco-Prussian 1870, WWI 1914, WWII 1940) over disputed territories of Alsace-Lorraine/Elsass-Lothringen. Finally, one side of defeated, settled borders were created and France/Germany have been partners now for decades (under American protectorate).

The ethic mixing is a huge part of the problem in the war torn parts of the world, the Middle East, Africa, Pakistan/India/Afghanistan.

The West took centuries to sort this out. Central Europe took WWII to sort it our. The Balkans, Eastern Europe, Central Asia, the Middle East and South Asian are still sorting this out. It ain't pretty and it ain't gonna get any prettier.

Segregate, build fences -- sadly, that seems to be the only solution. The problem is -- which land belongs to whom. in most places "everyone" has lived or continues to live there in a mixed fashion.

but good sum-up, thank you

6 posted on 08/05/2011 2:56:54 AM PDT by Cronos ( W Szczebrzeszynie chrzaszcz brzmi w trzcinie I Szczebrzeszyn z tego slynie.)
[ Post Reply | Private Reply | To 5 | View Replies]
To: Ravnagora
The true ethnic cleansing in xYugo perpetrated by the Croats, aided by the US....shame! I remember it so well 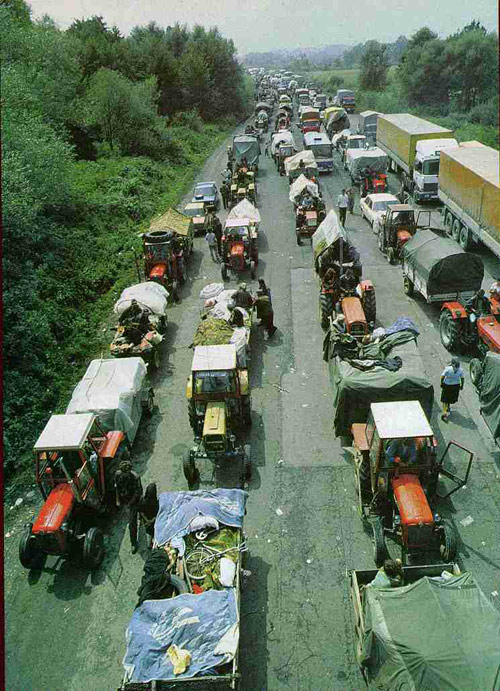