Former President George W. Bush says it was a "huge mistake" to let himself be photographed looking from Air Force One down at the aftermath of Hurricane Katrina.

Bush reflected on the iconic photograph during an interview with NBC's Matt Lauer to promote his forthcoming memoir, "Decision Points." The photo was published widely and only reinforced the view that the Bush administration didn't act quickly enough or fully grasp the severity of the problems on the ground in New Orleans after the levees broke. 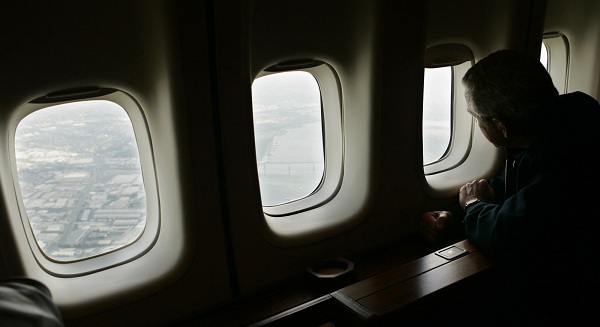 I don’t remember that picture.

I don’t recall that picture. Maybe it was just a big deal in the minds of liberals.

I may have to cancel the order I placed for his book if it is filled with this mea culpa crap! W has become convinced of the propaganda the DBM headed on him all those years. The photo was fine. It was all the lies that went with it. Do you hear Bambi crying about all the shots on the golf course while the Gulf had the oil spill? No! As Dan Reeves once said (in a deodorant commercial), “Don’t let them see you sweat.”

“Let’s get to the picture that we may have seen more of you in the last couple years of your presidency than any other picture,” Lauer said

This is my first time seeing it since Katrina, and I vaguely remember seeing it then...

It’s a picture of him looking out of an airplane window. So what?

Bush’s swift and comprehensive response to Katrina prevented no less than 9,000 deaths in New Orleans and hundreds more throughout the coast.

We are mislead by a nation of conservative haters.

“headed” should be “heaped”

I don’t remember the picture either, but apparently it was an issue because he didn’t land and meet people on the ground.

j...and so was renaming the original operation in Iraq from “Infinite Justice” to some other politically correct term. We should have really taken care of the sand monkeys Infintely in one single action.

But of course when The Kenyan had AF1 buzz Manhattan, that was OK.

No, George, that wasn't your big mistake. Your BIG MISTAKE was in alienating your (once loyal) base support. Me for example!

By SPENDING more of our hard earned money that every President since Lyndon Johnson.

By REFUSING to enforce U.S. laws, secure the Mexican Border, and halt illegal immigration--in violation of your oath to protect U.S. law and U.S. citizens.

By setting the U.S. up for its present situation.

THANKS A LOT, GEORGE! NOW JUST GET OUT OF THE WAY!

I don’t see how it’s a mistake.

How best to survey the damage than from above?

It’s a natural disaster, for crying out loud.

You can’t stop 100% of damage from occuring when something beyond your control strikes.

If Nagin and Blanco share no responsibility, then why even have local and state government?

Why don’t we just have federal government instead?

After all, I seem to remember a lot crying “BLAME BUSH” after Katrina but Nagin and Blanco got a free pass, and still do, to this very day.

Which seems to me to have been the correct decision. During the confusion and devastation, who wants to deal with all that comes with a POTUS visit at that time?

Of course I have absolutely zero political savvy so YMMV.

Personally I don’t see what’s the problem with this.

However, I do have a problem with obummer’s use of a photo-op with AF-1 circling the statue of liberty for no other reason.

A President wanting a birds eye view of the scale of a huge disaster is NOT unwarranted.

10 bucks says that while writing the book recently somebody told him that 5 years ago that photo created a firestorm (falsely). So he believed them on it and now says it was a mistake.

I don’t remember the picture either and I was all over Drudge and Fox News at the time.

U.S. Air Force One aircraft and another plane from his entourage are parked after the arrival of President Barack Obama and first lady Michelle Obama, as Indians spend time in an impoverished area of Mumbai, India, Saturday, Nov. 6, 2010. Obama arrived in India on Saturday, beginning a 10-day, four-country tour of Asia that will take him through some of the region’s most vibrant democracies in search of U.S. economic and security benefits.
(AP Photo/Dhiraj Singh)