President Barack Obama has lashed back at critics who fear he lacks the steel to be a successful president, saying "I'm skinny ... but I'm tough."

Obama, who is trying to navigate a climate of sharp political partisanship, said he was spoiling for a fight to enact his ambitious agenda.

"There are people saying mean things about me and folks are worried," Obama said on Monday, as he headlined a pair of Florida Democratic Party fundraisers that racked up a total of 1.5 million dollars.

"I'm not going to shrink back, because now is the time for us to continue to push and follow through on those things that we know have to be done but haven't been done for decades."

Obama reeled off a list of what he billed as the early achievements of his administration, including rescuing the economy from a possible depression.

He also said he was "confident" that he would be able to force a landmark healthcare reform bill through Congress by the end of the year.

A number of commentators have in recent weeks started to question Obama's fortitude, worrying that his cool demeanor masks a lacking killer instinct.

His wife if fat and tough.

So *tough* that he voted PRESENT rather than make a tough decision for most of his political career????

A whiney maroon at that!

I guess it really IS all about him.

(But he keeps on saying it isn’t.)

What is this guy doing in the White House?

That’s why I believe him this time. Look at his wife.

IMHO, Obama is Michelle's “Uncle Tom”. He could have claimed he was white, but that subject NEVER comes up in any of his speeches calling for “unity”.

Has anyone got any pictures of O and M reading books to or hula hooping with the majority of kids being anything other than African Americans? I believe this is why the Obama administration is setting this Country back a century when it comes to racism.

“Skinny but tough? Hmmmmmmph...what a maroon...”

Clearly his next move should be a run in the UFC. Tough guy, eh?

This will cause the Iranians, North Koreans, and Taliban to break out into cold sweats of blood curdling fear.

Oh he’s got killer instinct alright...he’s all for killing unborn and recently born little girls and boys..simply because they are poor, or uneducated or unwanted by someone or society...he’s all about killing the elderly who happen to get sick instead of paying for their care to live just a few more years...he’s all over killing those who just might suffer or who have been convinced they are a burden to society or family...he’s does everything possible to ensure he spreads his death culture stance throughout the world with taxpayer dollars.

Jack Sprat and his wife.

This guy is certainly not made of ‘Presidential’ material.

This clown is an embarrassment to the USA. 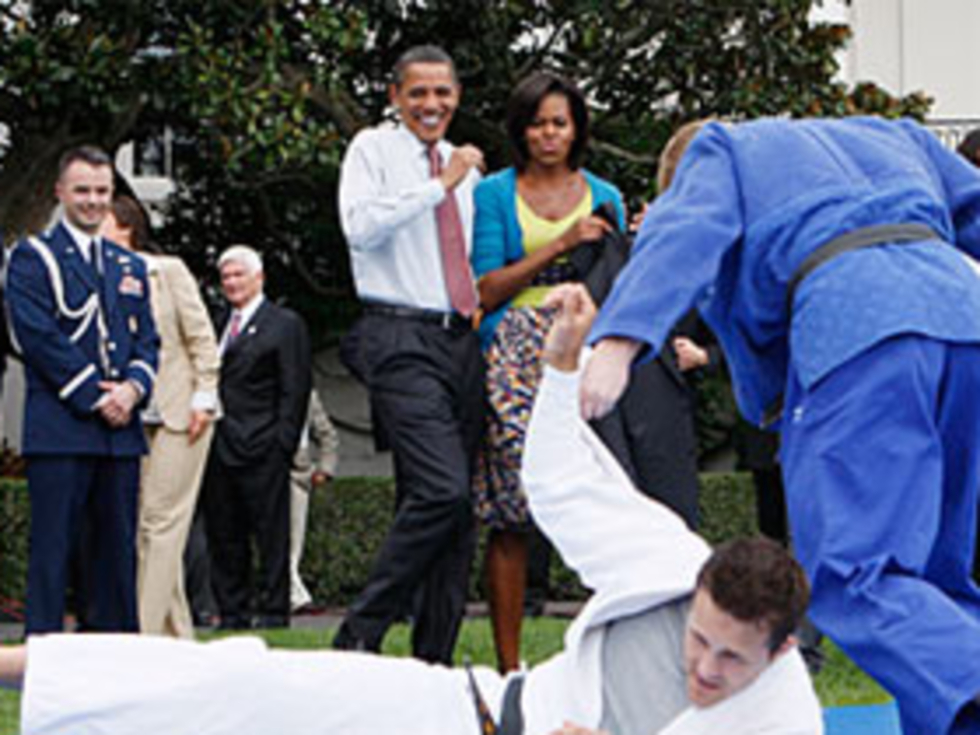 your a candy a$$ed radical liar, who's played golf 24 times,been on the campaign trail the last 10 months,and probably still don't know there's a bathroom off the Oval office because the “big desk” scares your a$$