The juxtaposition on our front page this morning is striking. We carry a photograph of Acting Sgt Michael Lockett - who was killed in Helmand on Monday - receiving the Military Cross from the Queen in June, 2008. He was the 217th British soldier to die in the Afghan conflict. Alongside the picture, we read that the Prime Minister was forced to dash through the kitchens of the UN in New York to secure a few minutes “face time” with President Obama after five requests for a sit-down meeting were rejected by the White House.

What are we to make of this? This country has proved, through the bravery of men like Acting Sgt Lockett, America’s staunchest ally in Afghanistan. In return, the American President treats the British Prime Minister with casual contempt. The President’s graceless behaviour is unforgivable. As most members of the Cabinet would confirm, it’s not a barrel of laughs having to sit down for a chat with Gordon Brown. But that’s not the point. Mr Obama owes this country a great deal for its unflinching commitment to the American-led war in Afghanistan but seems incapable of acknowledging the fact. You might have thought that after the shambles of Mr Brown’s first visit to the Obama White House - when there was no joint press conference and the President’s “gift” to the Prime Minister was a boxed DVD set - that lessons would have been learned. Apparently not. 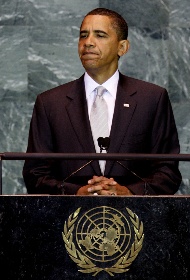 1 posted on 09/24/2009 5:08:29 AM PDT by COUNTrecount
[ Post Reply | Private Reply | View Replies]
To: COUNTrecount
You might have thought that after the shambles of Mr Brown’s first visit to the Obama White House - when there was no joint press conference and the President’s “gift” to the Prime Minister was a boxed DVD set - that lessons would have been learned. Apparently not.

What makes this writer think the Obama Administration was the least bit interested in learning said lesson?

Or that the Obama Administration was trying to impart a lesson of its own to Britain - and our other allies?

The Obama Administration did not use reason to reach the positions it now occupies - so why would reason be effective to talk them out of those positions?

The only think that will knock some sense into them is the harsh bite of hard reality - and we can only hope the collateral damage to American citizens and American interests is not horrific.

Actually, it is quite simple: Great Britain is a staunch ally of the United States. And therefore an enemy of ObaMao.

Obama is a jackass. My sincere apologies to any Brits who frequent this forum. I guarantee very few Americans (even most who voted for O) share his contempt of our traditional allies.

Except, that it is not mere thoughtlessness. It is outright contempt.

Kenyans have always blamed the British for all their problems.
BO identifies as a Kenyan, not an American. After all, he says the USA is nothing special. (As such, he should be treated with the same amount of respect that the president of Botswana receives, shouldn’t he?)

I’m sure the majority of people in Great Britain were ecstatic over obama’s ascendancy in Nov 2008. They got what they wanted, so they shouldn’t complain about him now.

Why would the PM wish to speak to Obama anyhow? What would be the purpose?

Obama is very ideologically committed, and his actions are very predictable. It isn’t like the British government would be able to influence Obama’s actions by talk.

The PM should just do what he thinks is in the best interests of his own country- and not worry about Obama’s reaction.

Obama is not exactly fond of countries who actually like America.

No Britain, he hates all of you. Why is it you don’t get that?

He hates America too. Join the club.

That said, Obama has a special hatred of the UK because of its colonisation of Kenya and other parts of Africa.

Obambi’s true Paygrade should be that of a Dirty Diaper Sorter except William Ayers, the Unrepentant Pentagon Bomber, created this POS to attempt to carry out Ayer’s once Failed Agenda! OBAMBI Hates AMERICA! and ALL THAT AMERICA STANDS FOR!!

OBAMBI FAILED AT EVEN WRITING HIS OWN FORGED “MEMOIRS!”
AYERS WROTE “DREAMS FROM MY DRUNKEN, POLYGAMIST, ABSENT, IRRESPONSIBLE, KENYAN BORN, SNAKEOIL SALESMAN FATHER!”
OBAMBI was/is to Incompetent a Talent and Character to complete such a Work:-(

13 posted on 09/24/2009 5:22:06 AM PDT by True Republican Patriot (May GOD Continue to BLESS Our Great President George W. Bush!!)
[ Post Reply | Private Reply | To 1 | View Replies]
To: COUNTrecount
Mr Obama owes this country a great deal for its unflinching commitment to the American Bush-led war in Afghanistan but seems incapable of acknowledging the fact.

Mr. Brown's sin is believing it is American-led. Until, the One is the acknowledged leader of the "Nation of the One" no respect will be given.

14 posted on 09/24/2009 5:22:49 AM PDT by depressed in 06 (Idiotcracy has arrived 400 years early.)
[ Post Reply | Private Reply | To 1 | View Replies]
To: Vigilanteman
Don't forget that Rahmbo Emmanuel's father and grandfather were “simple soldiers” in the Jewish/Israeli terrorist group Irgun and probably targeted a few Brits in Palestine back in their day

In fact Rahmbos family name was changed to “Emmanuel” to honor a great uncle who died in Palestine from...
shrapnel? (Or maybe British rope burn?)

People voted for the opposite of George W. Bush. They got it in spades.

I suspect he got his attitude about Britain from his (supposedly) male genetic material donor. I suspect that "Kenyan daddy" was anti-British, in addition to being a Marxist.

the bomb is a disgrace to the country, and I balme those who voted for him.

Dear UK, you take care of kicking out your childish leftist Prime Minister.

As per usual, we’ve outdone ourselves this time. The Obamaloon is an inexcusable piece of slime mold vaulted into the presidency. We apologize.