Frustrated with delays, rejections and computer-system crashes, several New Hampshire auto dealers are making car buyers pledge to cover rebates if the federal government doesn't come through with checks under the Cash for Clunkers program.

Auto dealers say they are doing so because the federal government is a clunker when it comes to sending out rebate checks of $3,500 or $4,500 per car.

Some dealers aren't using the agreement. Others are negotiating the agreement into the deal. McNamara said dealers are having problems getting rebates from the federal government, despite a law that requires any rebate application to be answered within 10 days.

At Bonneville & Son in Manchester, the company has not received a single rebate, despite the 70 Cash for Clunker deals it signed since late July. Manchester Subaru has had one of 25 rebates approved.

The Feds and this current Administration stepped in it ‘BIG’ this time.

Promising more than could ever deliver and buying an election. When will people ever wake-up!

Our current regime is of the misimpression that it's actually a trivial matter for government agencies to spend money.

Only thing good to come out of this is a lesson to the public ~ government is a deadbeat.

The customer gets slammed from every direction.

This was all for the banks to get more consumption loans green shooted (using tax $'y as fertilizer).

I hope they learned their lesson.

Dealing with the Gov. is a carney game.

Unless your really deparate or stupid , don't do it.

These dealers thought this was the greatest thing since sliced bread before.
Now they are crying because the Federal Government is not paying up?
The FederalGovernment is BROKE.
Add to that incopmpetent, incapable and corrupt.
These dealers will be lucky to ever see a cent.
Don’t feelone bit sorry for them

wasn’t Obama going to put gas in our tanks too?

“Auto dealers say they are doing so because the federal government is a clunker when it comes to sending out rebate checks of $3,500 or $4,500 per car”

My doctor quit accepting Medicare about 2 yrs ago.......posted huge signs all over her office. One day we were chatting before my actual “why are you here?” and I asked her why. She said she was owed something like $287,000 and as a one doctor office she just can’t afford to do business that way.
I can’t complain, the waits to see her are much shorter but now all those Medicare patients are out of an excellent doctor.

I can actually see this whole thing blowing up in the feds face. Hopefully that rino sec of transportation, Lahood, gets a pink slip. Damn 0 apologist. 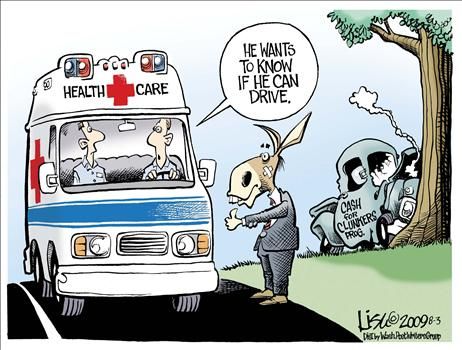 I fail to see what the entire point of this ridiculous 4 week long fiasco was.
Certainly it wasn’t to boost car sales long term, a short term increase followed by depressed sales doesn’t do a damned thing for anybody

The federal government has only reimbursed auto dealers for 2 percent of the claims they’ve submitted through the popular “cash for clunkers” program, a Pennsylvania congressman said, calling on the Obama administration to help speed up the process.

Rep. Joe Sestak, D-Pa., called for “immediate action” to address the problem in a statement Sunday, after writing a letter to President Obama Saturday expressing his concerns.

In the letter, Sestak said only 2 percent of claims have been paid and that four of every five applications have been “rejected for minor oversight.”

In recent days, auto dealers across the country have been complaining that the reimbursement payments are slow to process. And they said some of their applications were being rejected because of apparent procedural issues. The statistics Sestak cited suggest those complaints are not based on isolated incidents.

Government comes up with some grand plan and forces the taxpayers into footing the bill.

Then there's the lovely aspect of OUR tax dollars being used to support such Utopian schemes as 'social justice' and 'equality' a la organizations such as ACORN and ACLU.

By equality, in a democracy, is to be understood, equality of civil rights, and not of condition. Equality of rights necessarily produces inequality of possessions; because, by the laws of nature and of equality, every man has a right to use his faculties in an honest way, and the fruits of his labor, thus acquired, are his own. But some men have more strength than others; some more health; some more industry; and some more skill and ingenuity, than others; and according to these, and other circumstances the products of their labor must be various, and their property must become unequal. The rights of property must be sacred, and must be protected; otherwise there could be no exertion of either ingenuity or industry, and consequently nothing but extreme poverty, misery, and brutal ignorance.
St. George Tucker, "View of the Constitution of the United States" 1803

Amazing how the Liberal agenda can so easily be depicted in a cartoon like the one you posted.

With Government Motors going into business, any good solid older vehicle still in use drove the general market for new cars down. Trade in the still serviceable cars with a super-sweet deal....boom!... instant demand.

You know how the federal government hates competition. :-)

The stories about how ineptly-run cash for clunkers is has begun to be front page news. There have been a lot of stories about the failure to pay dealerships.

It’s just further evidence that the obama is running an inept White House.

Yep, they get to pay TWICE! First time thru the taxes to pay for this ‘clunker’ of a program, then again by signing a ‘promissory note’ to the dealer when the fed refuses to honor its rebate commitment

19 posted on 08/22/2009 1:12:52 PM PDT by Mr_Moonlight
[ Post Reply | Private Reply | To 4 | View Replies]
To: george76
I suppose the auto dealers felt they were going to get something like timely payment and not the Medicare-style step-'n-fetchit routine where the feds liesurely send payment 60 to 90 days after it is filed for and they get around to it - assuming the paperwork is filed correctly in the first place with all the "i"s and "t"s crossed.