A compound that appears to target the master cells which help breast cancers grow and spread has been discovered by US scientists. 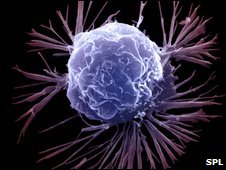 Some 16,000 chemicals were tested by researchers

The drug, a farm antibiotic, has yet to be tested in humans, the journal Cell reports.

But UK experts warned a human version could be some years away.

The reasons why, even following powerful chemotherapy, some cancers can grow back, are not fully understood.

Many scientists believe a key role lies with stem cells, which can be resistant to conventional chemotherapy, remaining to 'seed' new tumours and drive their growth.

The drug's potential was identified by researchers at the Massachusetts Institute of Technology, who tested 16,000 existing chemical compounds against breast cancer stem cells in the laboratory.

Those which performed the best were then tried in mice, and compared to existing drugs such as paclitaxel.

Another discovery we will either never have actually reach th marketplace or one that will take 20 years to actually see happen.

Stuff is already used as an inhibitor of “cocci”(a fungus) growth
in chicken feed. Being exposed to it is dangerous, but most
likely at higher levels than one would get from the environment
or from food(though it would be interesting to see what the
concentration of this stuff is in chickens who are fed it)

Seems like it messes up cellular functions, especially muscle
and cardiac cells...can lead to rhadomyolysis in cows, dogs,
and heart failure....maybe it would be tried on the most
advanced breast cancers who have no hope(even if Obama is
on the case)...

This report may be on the level of this” fire is reported
to kill all tumor cells”...therefore we have to investigate
the therapeutic use of fire in treating cancer”

Well.... one doesn’t normally go thru chemotherapy without it being a life or death issue....it certainly extended my wife’s life....