PRAGUE -- The head of U.S. Central Command, General David Petraeus, has told RFE/RL he thinks that "on balance" the expected closure of the Guantanamo Bay detention facility and abandonment of so-called enhanced interrogation techniques will "help" U.S. efforts in Iraq and Afghanistan, as well as the struggle against transnational extremist violence.

TOPICS: Breaking News; Foreign Affairs; Government; News/Current Events
KEYWORDS: bho44; bhodod; clubgitmo; detainees; gitmo; guantanamo; noprisonersnoproblem; petraeus; wot Navigation: use the links below to view more comments.
first previous 1-20, 21-40, 41-60, 61-80 ... 101-120 next last
To: myself6
I believe that calls by conservatives for either Cheney to lead the GOP or run for office are staggeringly premature.

I can agree that any choice today, May 28, 2009, is premature. But you haven't offered any alternatives. Who would you suggest be on the short list of actual human beings to take the leadership role?

I am for closing it too as long as we don’t bring the animals onto American soil. That IS the problem. The American courts will end up releasing them to kill Americans without a second thought. They will suddenly rediscover the constitution when it comes to giving foreigners constitutional rights that Americans have not seen for years now.

We should send them back to their own nations of origin and I do not care what those countries do with them. Liberals would rather have them kill us than take the risk that their governments will kill them.

YEP !
Sounds like another libtard mantra about the “2 states solution” in the israelo-palestinian conflict!
As if it will happen only by repeating it like a parrot whatever can be the reallity on the ground

They won't take them back. We asked. They told us to pound sand.

It's either Gitmo or the O.J. Simpson Memorial Justice System. There are no other choices.

I nominate Berkley as the site to house them.

45 posted on 05/28/2009 7:33:10 AM PDT by for-q-clinton (If at first you don't succeed keep on sucking until you do succeed)
[ Post Reply | Private Reply | To 1 | View Replies]
To: ksen; rintense
Petraeus says that closing Guantanamo "in a responsible manner...sends an important message to the world, as does the commitment of the United States to observe the Geneva Convention when it comes to the treatment of detainees."

This is not a statement without conditions. "In a responsible manner" is the key.

It's only common sense that there can be more than only one solution to a problem like imprisoning terrorists. The problem with keeping them locked up in the US is the ACLU.

I don't think Obama would agree with that.

There would be no more US prisoners out of Afghan and Iraq. I'd think that jurisdiction really shouldn't belong to us anymore since their governments are in place. And I'd return these to those governments. There are no alternatives at this point.

None... (that I know of) At least as far as the National party and federal offices go... And that is a good thing, as Ill explain.

There are many folks at the state level who share our “angry malcontent right wing extremist” views. Honestly, that is where the focus should be. We are not going to beat the federal government back into the limited size and scope that was intended for it from with the federal government. We are going to do it with the organizational units that originally created the fedgov... the States.

Do I really think it matters that cheney, steel, limbaugh or any other person heads the national GOP or holds some federal position? nope... they are ineffectual anyway. The real danger is in the shift of momentum and focus of the folks on our side away from what can make significant change back to the same old worn out path.

We need to concentrate 100% of our efforts on getting control of as many states as possible with folks who are willing to set those states against the usurpations of the fedgov. Anything else is just a distraction from the main front of this war.

49 posted on 05/28/2009 7:51:08 AM PDT by GOPsterinMA (Where can I take 'Austrian' lessons?)
[ Post Reply | Private Reply | To 35 | View Replies]
To: ksen
It is an Overseas Contingency Operation to ameliorate the root causes of Transnational Extremist Violence levied by Aggrieved Underprivileged Minorities reacting with the only means they have to the ravages of Neo-Colonial Belligerence and Decades of Corporate Raiding of Local Environmental and Labor Resources. Ask the Green Party or the Socialist International. I've heard them blame Pepsi and Playboy too.

I'd rather be blunt about it - these are idealistic, Wilsonian campaigns to trade thousands of American lives and trillions in American treasure for the mere hope that the supposedly transformative powers of democracy will turn large groups of savage neolithic moron thugs into temperate, classically liberal, peaceful societies that will no longer attack America or its allies (ally?) just because they will all get to decide the next few of their leaders by ballot before eventually electing another democracy-ending dictator to offer them the chance at achieving what they almost universally accept will be the Final Solution to all of their problems - all presented under the rubric of "national security" because even the brain-addled sheeple who demand tons magical solutions to problems (like "free everything for everyone forever") retain enough cognitive ability to render a direct appeal to Wilsonianism electorally infeasible. American foreign policy has been the playground of idealists since the early 20th Century, and now we are finally seeing a truthful linguistic evolution for the terms used in the promotion of Wilsonian idiocy.

50 posted on 05/28/2009 7:54:38 AM PDT by M203M4 (A rainbow-excreting government-cheese-pie-eating unicorn in every pot.)
[ Post Reply | Private Reply | To 19 | View Replies]
To: ksen
Petraeus says that closing Guantanamo "in a responsible manner...sends an important message to the world, as does the commitment of the United States to observe the Geneva Convention when it comes to the treatment of detainees." "I have long been on record as having testified and also in helping write doctrine for interrogation techniques that are completely in line with the Geneva Convention," Petraeus says.

Sounds like he's keeping his options open. Plus Gen Petraeus is a soldier. Leave "enhanced" interrogation to the CIA types.

Well, we need to fight on more than one front at a time. We need to do what you suggest, which is what the left has been doing for 40+ years and their ship has come in. Much of this has been done behind the scenes while we (most average people, anyway) weren't looking.

We also need to fight a very public fight in the arena of ideas and this is where the "leader" of the movement is important. As far as I'm concerned it can be a leadership team and, in fact, I think this is best as it projects power and confidence. These leaders will emerge. I still agree with you that it is premature to pick now. Leadership becomes apparent. It is seldom artificially generated.

It bothers me that the Rush, Cheney, etc. conservative side is being ignored or trashed by the rest of the RINOs. If Cheney can't get support IN PRINCIPLE after his Obama smackdown speech then, as I wrote at the time, we are very screwed at least for the time being.

What I really wonder about is whether there is *anyone* behind the scenes actually strategizing the conservative movement's long term campaign. Right now it looks like the RINOs are simply pushing us out.

Personally, I'm depressed about the near term. We'll see what happens next.

Close Gitmo. Let them swim home. If they make it, they’re more than welcome to rejoin the jihad.

What is “rendition”? I only recall our allies telling us to pound sand. Are you sure of what you are saying here?

You can't handle the truth!

Son, we live in a world that has walls, and those walls have to be guarded by men with guns. Who's gonna do it? You? You, Lieutenant Weinberg? I have a greater responsibility than you can possibly fathom. You weep for Santiago, and you curse the Marines. You have that luxury. You have the luxury of not knowing what I know -- that Santiago's death, while tragic, probably saved lives; and my existence, while grotesque and incomprehensible to you, saves lives.

We use words like "honor," "code," "loyalty." We use these words as the backbone of a life spent defending something. You use them as a punch line.

I have neither the time nor the inclination to explain myself to a man who rises and sleeps under the blanket of the very freedom that I provide and then questions the manner in which I provide it.

I would rather that you just said "thank you" and went on your way. Otherwise, I suggest you pick up a weapon and stand the post. Either way, I don't give a DAMN what you think you're entitled to! 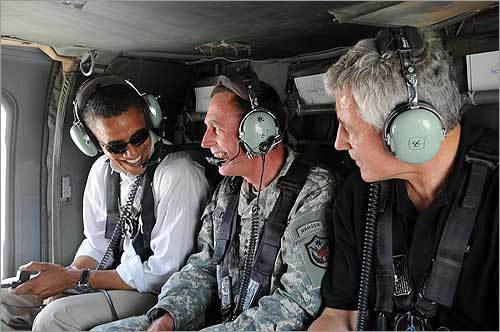 I’ve always felt that the inner message of that movie is those ideas espoused by Jack were being put on trial and found wanting. The truth is, I agree with every word that was said there. Jack would have made a great Marine, at least the character of Col Jessup would... : )

What I know of rendition, it was used for interrogation purposes, not long-term incarceration.

I’m sure that I don’t trust any of our non-allies — Islamist non-allies, at that — to indefinitely incarcerate hardened terrorists committed to our destruction. It seems to me this is something we should be doing. We captured them, we have the most to lose by releasing them. It’s not reasonable to expect any other country to solve this problem for us, especially countries that are part of the problem to begin with.

The head of U.S. Central Command, General David Petraeus, has told RFE/RL he thinks that "on balance" the expected closure of the Guantanamo Bay detention facility and abandonment of so-called enhanced interrogation techniques will "help" U.S. efforts in Iraq and Afghanistan, as well as the struggle against transnational extremist violence.