A former Hazleton polka band leader who defrauded fans and other investors in 22 states of millions of dollars is staying in a Scranton halfway house as he finishes his prison term, which is set to end next month.

Jan Lewan is in the Community Corrections Management program of the federal Bureau of Prisons and due to be released April 16.

While in a halfway house, inmates are expected to work as they prepare to return to life outside the prison system, Carla Wilson of the bureau’s northeast regional office in Philadelphia said.

John F. Mikulak, a director of a documentary film about Lewan, said Lewan works in a soup kitchen and at times has permission to leave the halfway house operated by Catholic Social Services at 409-411 Olive Ave.

Apparently, Lewan wants to return to Hazleton when his sentence expires, Mikulak said.

Lewan entered prison in January 2004, but on April 18 that year, another inmate at the Delaware Correctional Center in Smyrna, Del., slit Lewan’s throat.

He survived the attack, but two years later was experiencing heart problems when Delaware commuted the remainder of his sentence.

Lewan later entered the federal prison system to finish his term while being sent to several centers, including one in Kentucky.

Federal charges against him consolidated charges from other states in which Lewan admitted wrongdoing.

At the peak of his popularity, Lewan, a Polish immigrant whose full name is Lewandowski, received a Grammy nomination. He performed to energetic crowds in Atlantic City, N.J., and Las Vegas, Nev., and led tour groups to Europe that sometimes included visits with Pope John Paul II.

In Hazleton, Lewan operated a gift and jewelry store, and his wife, Rhonda, won the Mrs. Pennsylvania pageant in 1998. She relinquished her title after information surfaced to show that the judges’ scorecards were changed to make her the winner.

In 2001, a bus carrying Lewan and his band crashed in Florida, killing two musicians and injuring Lewan’s son, who was a teenager then.

Lewan filed for bankruptcy in 2002.

The next year he faced charges of defrauding investors on unregistered securities that he sold.

He promised investors returns of 12 percent and, later, 20 percent, which he couldn’t fulfill.

“He was an unregistered seller of unregistered securities. He was also guilty of fraud under securities statutes in the process. He wasn’t telling investors the necessary information and was making misrepresentation,” Michael Byrne, general counsel for the Pennsylvania Securities Commission, said. “My recollection was the whole thing was a Ponzi scheme.”

In such a scheme, named for Charles Ponzi, the first criminal to use it, the manager uses money from new investors to pay old investors until the scam collapses.

Pennsylvania first told him to stop selling securities in 2000 when he offered to repay investors in a settlement.

He still owes millions of dollars to investors, and New Jersey assessed a civil fine against him of $950,000.

While Lewan was in prison, Mikulak and Joshua Brown directed “The Mystery of the Polka King,” which aired on Court TV in 2007. Shawn Kelly, a former editor at the Standard-Speaker, is the associate producer.

They expanded the film into a feature-length documentary, “The Man Who Would Be Polka King,” that was presented March 21 at the Boston Underground Film Festival.

Mikulak said Lewan’s financial misadventures parallel those of Bernard Madoff, the former chief of the NASDAQ stock exchange who pleaded guilty after being charged in a scam that involved up to $50 billion.

“The way Madoff operated was similar. He preyed on his own ethnic group,” said Mikulak, adding that Lewan’s deals involved much smaller sums.

In the film, one of Lewan’s victims expresses the wish that Lewan had died during the attack in prison.

“These people were placing tremendous trust in Lewandowski with respect to their life savings. You can understand why there would be some fire in their position,” Byrne said. “You have a middle-class person who works all their lives. They save. They do thrift, and then somebody comes along. They don’t get involved because they’re greedy. An awful lot of people who are aging, coming into retirement, are just worried about keeping up. It’s a tremendous fear.”

My favorite album is “Polka, Polka, Polka” - you must have heard of it!

That has got to be humiliating- conned by a Polka King.

I haven’t, but I’m sure my father-in-law has. 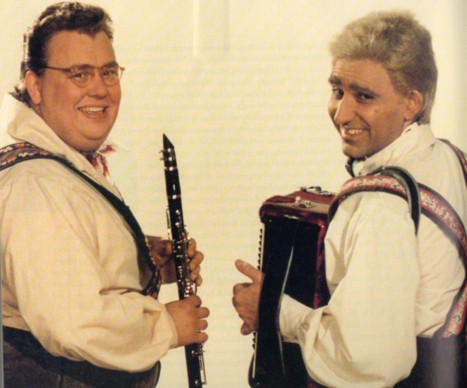 Without Polka, we would not have Weird Al Yankovich!

Wow, didn’t realize. Thought it was a “separated at birth” thing.

I miss the guy.

Hazleton is the only place I’ve ever has a scamutz (scamorza)pizza.

Just curious: what happens to a person who has huge judgments against him that he cannot possibly be reasonably expected to pay through the rest of his life? Is there some point after which the creditors simply have to eat it? Are his earnings garnished forever? And if so, who decides how much he needs to live on? Isn’t this a form of indentured servitude and isn’t that illegal?

He polkaed out of the pokey!

He's getting ready to dance a jig...