In the face of increasing terror attacks on our rights and our freedoms from the media and their anointed deities in Washington, it is important that we remember our history.

And those who died looking at the guns of oppression for many days, but who refused to quit.

-- And, in Goliad a few days before, remember also those who were mercilessly slaughtered AFTER meekly surrendering to the same invading horde of despots. Those deaths prove that "Quitting" and "Negotiations" are a fast way to death.

TOPICS: Foreign Affairs; Government; US: Tennessee; US: Texas
KEYWORDS: alamo; amnesty; goliad; guadalupehidalgo; sovereignty Navigation: use the links below to view more comments.
first 1-20, 21-40, 41-57 next last
Too few remember the murdered down in South Texas in Goliad - who were killed after leaving their fort.

Yes, some in TX were fighting Santa Anna for their economic freedom and way of life (which, in did include slavery) - but few who fought were slave-owners. Despite the revisonists today.

Thank you for the reminder.
May those that have any thinking abilities left, think.

The final assault came before daybreak on the morning of March 6, 1836, as columns of Mexican soldiers emerged from the predawn darkness and headed for the Alamo's walls. Cannon and small arms fire from inside the Alamo beat back several attacks. Regrouping, the Mexicans scaled the walls and rushed into the compound. Once inside, they turned a captured cannon on the Long Barrack and church, blasting open the barricaded doors. The desperate struggle continued until the defenders were overwhelmed. By sunrise, the battle had ended and Santa Anna entered the Alamo compound to survey the scene of his victory.

While the facts surrounding the siege of the Alamo continue to be debated, there is no doubt about what the battle has come to symbolize. People worldwide continue to remember the Alamo as a heroic struggle against impossible odds — a place where men made the ultimate sacrifice for freedom. For this reason, the Alamo remains hallowed ground and the Shrine of Texas Liberty.

(Below is the version of the Alamo story from “The Straight Dope”, by Cecil Adams, of the Chicago Reader, a column much like Snopes, devoted to sorting fact from fiction.)

There was not just one Texan survivor at the Alamo, but six: three women, two children, and a black male servant. In addition, sympathizers from the town of San Antonio across the river from the Alamo were sneaking in and out of the fort more or less continuously during the siege preceding the massacre, so there was no lack of Texan witnesses to the whole affair.

Still, the most detailed reports of the battle itself come from Mexican soldiers. It turns out that the stirring stories of heroic deeds so cherished by Texans were arrived at mostly by that creative process we call “making it up,” the basis of much American history.

One of the longest and possibly most objective accounts of the Alamo’s last stand was written by one Jose Enrique de la Pena, a lieutenant colonel with the forces of the Mexican president-general Santa Anna. He was critical of the leadership on both sides, particularly his own.

For instance, when Mexican forces first arrived at San Antonio on February 23, 1836, the Texans were sleeping it off from a rousing party the night before, and the Alamo (a converted mission) was guarded by only ten men. Rather than move swiftly, though, the Mexican commander dawdled, permitting the Texans to raise the alarm and scramble their forces into position.

As it happened, the defenders were about as disorganized as the Mexicans. They had a clumsy system of dual leadership, with the regular forces commanded by William Travis while the volunteers answered only to Jim Bowie. The Texans had not bothered to store much food or ammunition, and they had nowhere near enough men to defend their fort, a large, irregularly shaped compound whose walls were crumbling in places.

The Mexican troops, for their part, were poorly paid, ill-fed, and haphazardly trained, and had been exhausted by a grueling march over the desert. Even so, morale was reasonably high. The Mexicans with some justice regarded the Texans as murderous barbarians. Indeed, one of the reasons the Texans were so determined to win independence from Mexico in the first place was that the Mexican constitution outlawed slavery, which the Texans favored.

Having lost the advantage of surprise, Santa Anna could have done two things: simply bypass the Alamo altogether, since it was of little strategic value, or wait until his artillery arrived, which would simplify breaching the fort’s defenses. He did neither, opting instead for a rash attack instead on March 6—according to rumor, says de la Pena, because Santa Anna had heard that Travis and company were on the verge of surrendering, and he didn’t want to win without some battlefield heroics first.

The assault was a nightmare. Advancing on the fort, the Mexicans were ordered to commence firing while still out of range, with the result that they had to reload under the Texans’ guns. Scaling ladders were inadequate, and the Mexican soldiers were forced to scrabble over the walls on the backs of their fellows. Once the Mexicans were inside, the battle degenerated into a melee, with soldiers shooting at their comrades as often as at the enemy.

When it was all over, seven captured defenders, including Davy Crockett, were brought before Santa Anna. He ordered them killed, and they were hacked to death with sabres. American losses are variously given as 182, 188, and 253, while the Mexicans lost more than 300, de la Pena says. All in all, it was not a heroic episode for anyone concerned.

The heroes of Goliad and the Alamo are rolling in their graves to see what is happening these days.

May God Bless These Heroes. May Americans today learn the lessons of their sacrifice. 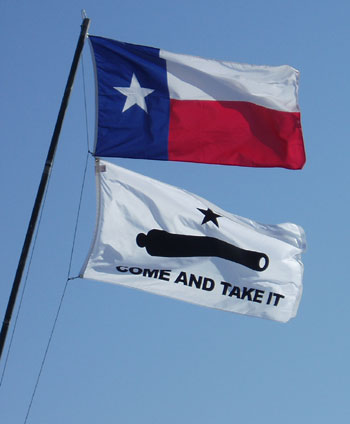 Today is an important day to remember.

And I was proud on Monday to be in one of the few counties where we still close offices for Texas Independence Day.

I remember the Alamo, every day.

Now if something could be done with Washington-on-the-Brazos, it would be even better.

TEXT OF LETTER FROM COL. TRAVIS:

I am beseiged, by a thousand or more of the Mexicans under Santa Anna — I have sustained a continual Bombardment & cannonade for 24 hours & have not lost a man — The enemy has demanded a surrender at discretion, otherwise, the garrison are to be put to the sword, if the fort is taken — I have answered the demand with a cannon shot, & our flag still waves proudly from the walls — I shall never surrender or retreat. Then, I call on you in the name of Liberty, of patriotism, & every thing dear to the American character, to come to our aid, with all dispatch — The enemy is receiving reinforcements daily & will no doubt increase to three or four thousand in four or five days. If this call is neglected, I am determined to sustain myself as long as possible & die like a soldier who never forgets what is due to his own honor & that of his country —

P.S. The Lord is on our side — When the enemy appeared in sight we had not three bushels of corn — We have since found in deserted houses 80 or 90 bushels & got into the walls 20 or 30 head of Beeves —

I will always remember the Alamo. It’s my birthday today.

Davy, a Tennessean, at the Alamo.

17 posted on 03/06/2009 8:28:44 PM PST by The Spirit Of Allegiance (Public Employees: Honor Your Oaths! Defend the Constitution from Enemies--Foreign and Domestic!)
[ Post Reply | Private Reply | To 1 | View Replies]
To: re_tail20
It turns out that the stirring stories of heroic deeds so cherished by Texans were arrived at mostly by that creative process we call “making it up,” the basis of much American history.

Ain't no bias in that piece of garbage. Nope!

See the article posted on the Libertarian Party website.

Another Mexican account says nothing of seven captured defenders but does describe an American shouting defiance at the Mexicans in between his deadly shots. After the battle the same leader was obeserved with his strange hat lying beside his body (Crockett often wore fox tailed hats as well as coonskins).