According to the linked page:

"Unnamed freelance journalist has the goods on Obama and Rezko"

Two years ago, Iraq's Ministry of Electricity gave a $50 million contract to a start-up security company owned by now-indicted businessman Tony Rezko and a onetime Chicago cop with a checkered financial past.

Within a month, an Iraqi leadership change left the deal in limbo

Companion beefed up its lobbying efforts in March, hiring a Washington attorney who has contacted the U.S. State and Commerce departments. Frawley wants U.S. officials to persuade the Iraqi government to honor the contract he signed on April 18, 2005, when Aiham Alsammarae, another friend of Rezko's, ran Iraq's electricity agency.

Iraq's current electricity minister has balked, saying Frawley's contract is too expensive, according to a U.S. Embassy official in Baghdad.

"Frawley originally had two other partners; one of them was a guy named Tony Rezko,'' said security consultant Patrick Goodale. Under the contract Frawley signed, Goodale is to coordinate training of the Iraqi power-plant guards.

Rezko, 52, is fighting federal charges that he solicited kickbacks from companies seeking state business under Blagojevich. Sources in December told the Sun-Times the feds are investigating Rezko's dealings in Iraq, where Rezko once had a contract from Alsammarae's agency to build a power plant.

Alsammarae, who lives in the Chicago area and was a college classmate of Rezko, is a dual U.S.-Iraqi citizen. He left his post as Iraq's electricity minister in May 2005, about a month after Companion got the contract. Alsammarae was accused of financial corruption by Iraqi authorities and jailed in Iraq last year before escaping and returning here.

Companion's contract called for it to fly 150 Iraqis to the United States for police-type training. Among the subjects: how to shoot AK-47 rifles.

As Frawley sought to revive the contract in spring 2006, Blagojevich's chief of staff, John Harris, directed the state's homeland security adviser, Jill Morgenthaler, to find "a military site for the training of Iraqi police forces,'' Morgenthaler wrote in an April 26, 2006, e-mail. She wrote the letter in June 2006 offering the Savanna site.

Two months later, Frawley sought help from Obama, a member of the Senate Foreign Relations Committee who is now running for president. Frawley met with Seamus Ahern, who runs Obama's Moline office. Frawley and Ahern discussed the proposal over a period of about six months.

Obama and Blagojevich viewed Frawley's efforts as a chance to create jobs in the Quad Cities area.

"We never got far enough along in the process to determine whether their plan was a good one," she said. "We only had preliminary discussions with them."

$100K, guns stolen — or were they? Companion Security lists its headquarters as a small house in La Grange that was the site of a bizarre burglary last year.

It’s the home of Companion owner Daniel T. Frawley’s sister, Maureen Frawley, a Forest Park police officer. She claimed someone broke in on April 27, 2006, and stole $100,000 in cash from her laundry room and three guns.

She told police the money belonged to her older brother, Daniel.

He “became defensive about questions relating to when, where and how he obtained the money,’’ according to a La Grange police report.

He told police he had withdrawn the money — $100 bills in bundles of $5,000 — from a Chicago bank, and his sister was supposed to have put the cash in a safe-deposit box.

Four days later, Maureen Frawley reported that the money and guns weren’t missing any more. She told police someone rang her doorbell, and when she answered, the cash and guns were on her porch, but no one was there.

When police arrived, the money was gone again. Maureen Frawley told officers her brother had taken it to his lawyer, George E. Weaver. Weaver told police the money had been “legally obtained by Daniel Frawley through real-estate transactions.’’

She told police the money belonged to her older brother, Daniel.

He “became defensive about questions relating to when, where and how he obtained the money,’’ according to a La Grange police report.

He told police he had withdrawn the money — $100 bills in bundles of $5,000 — from a Chicago bank, and his sister was supposed to have put the cash in a safe-deposit box.

Four days later, Maureen Frawley reported that the money and guns weren’t missing any more. She told police someone rang her doorbell, and when she answered, the cash and guns were on her porch, but no one was there.

When police arrived, the money was gone again. Maureen Frawley told officers her brother had taken it to his lawyer, George E. Weaver. Weaver told police the money had been “legally obtained by Daniel Frawley through real-estate transactions.’’

Send it to RUsh and Hannity....They seem to be the only ones that aren’t afraid of the THUGS.

BAGHDAD, Dec. 19 — In a lengthy phone conversation on Tuesday, the former Iraqi electricity minister who escaped from a Baghdad jail on Sunday ridiculed American and Iraqi officials and said he fled because he did not trust the police and had received a tip that he would be assassinated within days.

*snip* If correct, Mr. Alsammarae’s tale of escape would mean that he not only worked his way free of the Iraqi police guarding the jail but also eluded the thousands of Western and Iraqi security forces stationed in the dense maze of checkpoints and blast walls in the Green Zone, which is the fortified heart of the American occupation and the Iraqi government.

When asked how he could have pulled off such an escape, Mr. Alsammarae, who moved to Chicago in 1976 but returned to Iraq just after the invasion, laughed uproariously for 20 seconds. Then, recycling a famous line from an exchange about Al Capone in “The Untouchables,” Mr. Alsammarae said with undisguised glee: “The Chicago way.” 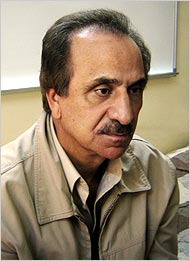 Note: the other man pictured with Rezko and Obama in the RNC video ad is Nadhmi Auchi, nefarious Iraqi billionaire.

Listen to their podcast here during the second hour (at approximately the 28 min. mark).

In the same context, Shaw and Batchelor also discussed Aiham Alsammarae (right), the former Iraqi Minister of Electricity (and former classmate with convicted political fixer, Antoin “Tony” Rezko) who was convicted of corruption October 2006 in Iraq, escaped first to Amman, Jordan, in December 2006 and returned to his Chicago home, and the alleged dismissal of charges against him by the Iraqi government. Alsammarae is once again involved in his homeland, Iraq, according to reports.

RW/RBO has written numerous articles about Alsammarae, his connections to both Rezko and Obama, as well as his apparent return to operations in Iraq.

In his February 28, 2005, NewsMax article Pentagon Document: U.S. Paid Pro-Saddam Figures, Chinese and French (now posted on the Institute for the Study of Globalization and Covert Politics website), Charles R. Smith wrote about the alleged corruption. RW/RBO was contacted by NewsMax earlier this year and informed that the article had been pulled due to unsubstantiated material, specifically the following section:

The documents also indicate that many firms – including French and Chinese ones that had cozy relationship’s with Saddam’s regime – continue to reap millions in contracts from Iraq’s new governing authorities.

As a result, millions of U.S. aid dollars and billions in Iraqi government funds have disappeared in an ongoing scandal that is poised to engulf Baghdad and Washington.

Worse still, a leading candidate for the top elected post in Iraq has also been implicated in the report as having taken “payoffs” in order to rig a major government cell phone contract.

According to a May 2004 U.S. Defense Department report to the inspector general and obtained under the Freedom of Information Act, a former financier and close associate of Saddam Hussein, Nadhmi Auchi, has “engaged in unlawful activities” such as bribing “foreign governments and individuals prior to Operation Iraqi Freedom to turn opinion against the American-led mission to remove Saddam Hussein.”

In addition, the report noted that Auchi arranged “for significant theft from the UN Oil-for-Food Program to smuggle weapons and dual-use technology into Iraq in violation of UN and other International Export Control Regimes.”

But the U.S. liberation of Iraq has done little to put Auchi out of business. According to the official DoD report, during the U.S. occupation Auchi has organized “an elaborate scheme to take over and control the post-war cellular phone system in Iraq.”

However, on September 23, 2008, RBO wrote about Nadhmi Auchi and the leaked DoD IG report, which backs up Smith’s February 2005 article.

When you look at the RNC ad, and you hear Obama in his own voice saying a decision he made was a “bonehead move” and that he considered it a “lapse in judgment”, why can’t we help the undecideds understand that we don’t need to have Obama have a “lapse in judgment” and make a “bonehead move” that will cost millions of Americans their lives...ah well, at least he’s got great oratorial skills.

Thanks for the ping. Now we know why the dems hated Blackwater so much...they couldn’t get a piece of the ‘action’.

Wonder if Obama’s ‘mystery man’ was ever involved with Companion Security and Frawley? He is/was a Chicago cop as well and reportedly provides ‘security’ to Obama. Hmmmmmm....

There is so much corruption here where do you start.

For clarification, Daniel T. Frawley is Joe Birkett’s cousin by marriage - Birkett’s marriage, not Daniel Frawley’s. Dan Frawley is a life-long bachelor with no children.

Nothing to do with Obama?? Oh, really?

4 years of the Big Zero.

Thank you for the ping, piasa/