I heard Ambassador Peck on an interview yesterday, did anybody else see him or hear him? He was on Fox News, this is a white man, and he was upsetting the Fox News commentators to no end. He pointed out, did you see him John, a white man, and he pointed out, an ambassador, that what Malcolm X said when he got silenced by Elijah Mohammed was in fact true, America’s chickens are coming home to roost. We took this country by terror, away from the Sioux, the Apache, the Arowak, the Comanche, the Arapahoe, the Navajo. Terrorism. We took Africans from their country to build our way of ease and kept them enslaved and living in fear. Terrorism. We bombed Granada and killed innocent civilians, babies, non-military personnel. We bombed the black civilian community of Panama with stealth bombers and killed unarmed teenagers and toddlers, pregnant mothers, and hardworking fathers. We bombed Qaddafi’s home and killed his child. Blessed are they who bash your children’s head against a rock. We bombed Iraq. We killed unarmed civilians trying to make a living. We bombed a plant in Sudan to payback for the attack on our embassy, killed hundreds of hardworking people, mothers and fathers who left home to go that day not knowing that they would never get back home. We bombed Hiroshima, we bombed Nagasaki, and we nuked far more than the thousands in New York and the Pentagon and we never batted an eye. Kids playing in the playground, mothers picking up children from school, civilians, not soldiers, people just trying to make it day by day.

We have supported state terrorism against the Palestinians and Black South Africans and now we are indignant because the stuff we have done overseas is now brought right back to our own front yards. America’s chickens are coming home to roost.

this is like smearing a rape victim for being raped.

Do they have the link for Fox on this from yesterday?

And we are also responsible for the extinction of the dinosaurs!

And we are also responsible for the extinction of the dinosaurs!

Well, for someone who just got caught with his hand in a cookie jar, one could say “his chickens came home to RRROOOOOSSST too.” LOL

"Why did it take a bunch of Arabs to do what you all should have done a long time ago?"

Question from audience:
You mentioned a little bit ago, "Why did it take a bunch of Arabs to do what you all should have done a long time ago," that's my question.

Churchill: I'm gonna repeat that, tell me if I got that right: Why shouldn't we do something and how do you you move so they don't see you coming.

As to the first part, not a reason in the world that I could see. I can't find a single reason that you shouldn't in a principled way —there may be some practical considerations, such as do you know how (laughter from audience)

They talk about "color blind or blind to your color." You said it yourself.

You don't send the Black Liberation Army into Wall Street to conduct an action.

You don't send the American Indian Movement into downtown Seattle to conduct an action.

Who do you send? You. Your beard shaved, your hair cut close, and wearing a banker's suit.

There's probably a whole lot more to it, you know that. But there's where you start. .."

Wright: "In the 21st century, white America got a wake-up call after 9/11/01. White America and the Western world came to realize that people of color had not gone away, faded into the woodwork or just 'disappeared' as the Great White West kept on its merry way of ignoring Black concerns." 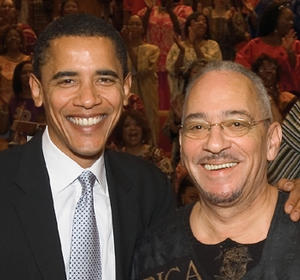 The Real Story Behind Rev. Wright's Controversial Black Liberation Theology Doctrine
Monday , May 5, 2008
FoxNews/Hannity's America
[special Friday night edition--original airdate May 2, 2008]
REV. BOB SCHENCK, NATIONAL CLERGY COUNCIL: "it's based in Marxism. At the core of his [Wright's] theology is really an anti-Christian understanding of God, and as part of a long history of individuals who actually advocate using violence in overthrowing those they perceive to be oppressing them, even acts of murder have been defended by followers of liberation theology. That's very, very dangerous."


For much more on BLT, the Weather Underground, and all the other ObamaRat-commie connections, please visit my newly revised FR Profile/Home page.
Everything there is linked directly to its source.
Plus, I've added within-page links which make is easy to hop around to various sections:
http://www.freerepublic.com/~etl

Yeah, America is the worst country in the World. And Obama’s head is full of this crap.

This person looks no farther than his nose. The Indians took the land away of the white man. African slavers, blacks living in Africa, sold their own people to the traders. The list goes on but nobody seems to care. I don’t even listen to these fools any more unless it is to defend myself.

Isn't it curious how the commentators and opinionators at FoxNews are always indignant toward these far left people, while at just about any other network, the interviewer would be biting their lip and nodding along as if in agreement?

Hey moron, who’s this “we” you keep talking about?

(“Those right-wing crackers are laughing at me! God damn America!”)

And besides, Obama didn't know that Reverend Wright said those sorts of things.