If the founder of The Weather Channel spoke out strongly against the manmade global warming myth, might media members notice?

We're going to find out the answer to that question soon, for John Coleman wrote an article published at ICECAP Wednesday that should certainly garner attention from press members -- assuming journalism hasn't been completely replaced by propagandist activism, that is.

It is the greatest scam in history. I am amazed, appalled and highly offended by it.

Global Warming; It is a SCAM.

Other scientists of the same environmental whacko type jumped into the circle to support and broaden the "research" to further enhance the totally slanted, bogus global warming claims. Their friends in government steered huge research grants their way to keep the movement going.

Soon they claimed to be a consensus.

Environmental extremists, notable politicians among them, then teamed up with movie, media and other liberal, environmentalist journalists to create this wild "scientific" scenario of the civilization threatening environmental consequences from Global Warming unless we adhere to their radical agenda.

Now their ridiculous manipulated science has been accepted as fact and become a cornerstone issue for CNN, CBS, NBC, the Democratic Political Party, the Governor of California, school teachers and, in many cases, well informed but very gullible environmental conscientious citizens.

Only one reporter at ABC has been allowed to counter the Global Warming frenzy with one 15 minutes documentary segment.

I have read dozens of scientific papers. I have talked with numerous scientists. I have studied. I have thought about it. I know I am correct.

There is no run away climate change. The impact of humans on climate is not catastrophic.

Our planet is not in peril.

I am incensed by the incredible media glamour, the politically correct silliness and rude dismissal of counter arguments by the high priest of Global Warming.

In time, a decade or two, the outrageous scam will be obvious.

“In time, a decade or two, the outrageous scam will be obvious.” 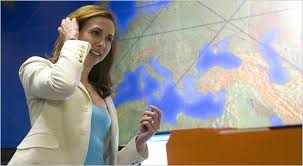 On Today's Forecast Earth, I, Heidi Cullen predict the earth will be a blazing ball of fire unless we get on our knees and worship Al Gore."

No doubt Rush will report this if nobody else does.

The sad thing is that everything we need to refute global warming, we learned in junior high science class:

b) when water heats, steam rises into the atmosphere!

c) when water in the atmosphere cools, it forms clouds!

d) clouds cool the surface temperature and, under the right circumstances, brings precipitation!

e) that precipitation replenishes the water supply and serves to regulate the temperature on the earth’s surface!

f) and 2/3rds of the earth’s surface is covered by water so God has provided an enormous temperature regulating system for us (as it were) to prevent the planet from getting too hot or too cold!

g) this system has been in place for a lot longer than man has and will still be there long after man has died off!

Now, subtle regional climate changes may take place over time but they aren’t caused by mankind driving cars or using incandescent light bulbs. Man is far too miniscule in relation to the planet to affect change.

I suppose if Mutual Assured Destruction were to take place on a global scale, we might just be able to alter the planet significantly to bring about global catastrophe but, if that happens, you’ll know it sooner than within 50 years and you won’t give a crap then whether you were driving a hybrid or recycling compost.

As soon as algore pockets ten to 20 million with his “Carbon Credit” scam, global warming will fade away.

Our job now is to document the warm-ongers words from print, audio, and video, and save it to personal hard disk archives. The MSM will be deleting all embarrassing evidence of this scam so that they may pull another. Most people's memories are very short. We need to gather the evidence and bring it back when the next political scam meant to knock down America comes around.

I’m so glad that Mr. Coleman had the knowledge and courage to say what he just said. Someone had to.

Don’t be trickin folk, using all that factual gobblity gook.

Forests are dyin, little girls in Alaska are cryin, and pretty soon the whole world will be fryin...

I guess Gore studied PT’s methods because he is making an awful lot of money on this scam and living a life totally different from what he tells everyone else to do.

17 posted on 11/07/2007 9:25:16 PM PST by Tennessee Nana
[ Post Reply | Private Reply | To 1 | View Replies]
To: tcrlaf
My only disagreement with Coleman is that “Global Warming” *is* a religion. At least it has become a part of religious Environmentalism. The scientific subject of which he speaks is climate change. That is the world of data, methods, theorizing, testing, and experimentation. When one delves into unquestioning faith in cause and effect, consequences, blame, and behavior modification to achieve salvation, one is dabbling in religion.

That’s fine in our freedom of religion society as long as it is labeled as such, but the Environmentalists have no more right to dictate what is taught and what is believed, by either schools or media, than Islamists do. Let’s have no more of this “settled science” nonsense.

Very well stated!! I have a Masters degree in Biology and I agree 100% with you. I teach a General Biology course for non-majors in our local community college and I try at least to let my students know that the theory of GW has just as many adversaries as proponents. Our Administration frowns on our talking about anything political in class, but I always use the “GW consensus” as an example when I am talking about the scientific method. I emphasize that they need to examine the evidence and draw their own conclusions rather than blindly believing whatever they hear or read in the MSM.