The bomb, an "explosively formed penetrator," is powerful enough to rip through an armored Humvee, the report said. Its use by Shiite militias has doubled in the past year.

Intelligence information that the Bush administration was expected to make public included information obtained from Iranians and Iraqis captured in raids in Baghdad and Erbil, the Times said.

"Equipment that was, we thought, pretty effective in protecting our troops just a matter of months ago is now being challenged by some of the techniques and devices over there," Fallon said. "So I'm learning as we go in that this is a fast-moving ballgame."

Sounds like this weekend is when the Admin is going to drop the evidence they were talking about the past 2 weeks of Iranian involvement.

If we Blew the $hit out of every dam and water treatment plant in iran in a matter of 20 minutes we would give them plenty to worry about instead of producing bombs.

You would probably enjoy this:

General George Patton Has A Solution To The Iraq War

We have a score to settle with Khamenei and Ahmadinejad.

This exact information was broadcast on the (now canceled) John Batchelar Show over a year ago.

Look For The Mullah Label

The Iranians understand the political climate here at home better than we think. As long as the violence rages in Iraq, they know that pressure will increase on the Bush administration to withdraw from the country. It doesn't make a lot of difference to Iran what form the violence takes, although they'd certainly be happy if the Shi'ites wiped out the Sunnis and the Kurds, as unlikely as that would be. They know that the Shi'ite majority will control Iraq in any case, especially while sectarian gang wars roil the capital. All they want to do is to exhaust American tenacity so that the war on Islamist terror fades before it reaches radical Islam's primary authors.

Isn't it odd that the administration would release this report on a weekend?

That was pretty funny.

Az-Zaman noted another interesting event; for the first time, the Supreme Council of the Islamic Revolution in Iraq (SCIRI) has directed criticisms against the Iranian government. Az-Zaman’s analysis is that Tehran is growing suspicious of SCIRI’s rapprochement with the American administration. A SCIRI leader included criticisms against the “Iranian meddling in Iraqi affairs” in his Friday sermon. SCIRI was considered to be one of Iran’s closest allies in Iraq. Az-Zaman quoted sources from the organization who said that the falling-out was caused by the denial of al-Hakeem’s request for Tehran to stop supporting the Mahdi Army, his main competitor in the Shi`a scene.

We let the assylum seekers and the insane get amnesty, open banks, have guns and run for office... what do we expect about our borders indeed...

"The border crossing at Mehran is identified as a major crossing point for the smuggling of money and weapons for Shiite militants, according to the intelligence."

Having researched various dangers Sloggers might fight the following comparative facts from Failure Analysis Associates, Inc. (excerpted from Design News, 10-4-93) and other government sources. Integrating Gen. Cody' estimate of 140,000 hours per crash would make flying an American helicopter during wartime less dangerous than skydiving and about 5 times more dangerous than general aviation flying. Its impossible to match various statistics because a hang glider crash kills one person yet a military helo may kill a dozen or more. So for relevant risk we have used fatal events instead of fatalities

FLYING HELICOPTERS IN IRAQ AND AFGHANISTAN 71.42

Traveling in a School Bus .022

If Tehran Only Knew, what will happen if there is no regime change in Iran.:

We say and hope our analysis is wrong. A possible military strike against Iranian nuclear facilities is in the final stages. Unless a political miracle occurs that revives the halted dialog between Iran and the international community, Iran and its neighboring countries should not be surprised by a scenario that includes American military action. "

Just maybe, President Bush is purposely allowing the media and the left to spout their garbage in order to create the illusion that we are completely incapable of taking any action against Iran. It would come as a complete surprise if we did take action.

Iranian Map: Before we unleash the real hell on earth shown below for the Iranian Whackjobs:

Then, we show the suicidal Islamofascist serial killers in charge of Iran, what real nuclear weapons will do.

Iranian Map: After the above!

Summary of US military buildup in the Persian Gulf area since the first of the year:

Over the past month, the U.S. Navy has given orders to the U.S.S. John Stennis carrier battle group, based in Bremerton, WA, to steam toward the Persian Gulf, where it will join the U.S.S. Dwight D. Eisenhower.

Oh, and along with them is the amphibious assault group led by the U.S.S. Boxer, which can land several thousand U.S. Marines to seize and destroy strategic sites near the coast at a moment’s notice. (Busheir? Bandar Abbas? Jask? The three Persian Gulf islands Iran seized from the UAE in the 1990s and has since fortified to harass Gulf shipping? Your pick).

Other recent US Naval and Marine Corp additions to handle/control/kill the Iranian Serial Killers:

While in the region, the Bataan Expeditionary Strike Group (ESG) will conduct maritime security operations (MSO).

“We’ll continue our role as the surface warfare commander and the air defense commander for the Bataan Expeditionary Strike Group,” said Cmdr. Jon Carriglitto, Bataan’s operations officer. “Together with the MEU, we bring the ability to insert a quick, capable amphibious force where it’s needed.”

While in theater, approximately 6,000 U.S. Sailors and Marines assigned to the ESG and the 26th MEU provide the combatant commander a versatile sea-based force that can be tailored to a variety of missions. The Bataan ESG has the capabilities to support MSO, combat operations and humanitarian assistance/disaster relief.

“Bataan ESG’s presence in the U.S. 5th Fleet will require the crew to conduct what it does best: well deck and flight deck operations,” said Carriglitto. “We’ll be conducting varsity-level operations, but much of it falls right in line with our ongoing training, so I know we’re ready to meet those challenges.”

Pentagon official tells LA Times aggressive new tactics designed to deter Iranian assistance to Iraqi militants may include more forceful patrols by fighter planes along Iran-Iraq border to counter smuggling of bomb supplies from Islamic Republic; ‘For every improvised explosive device that goes off in Iraq, a bomb should go off in Iran,’ retired Air Force lieutenant general says.

Military and intelligence sources continue to tell me that preparations are advancing for a war with Iran starting possibly as early as mid-to-late February. The sources offer some differences of opinion over whether Bush might cite a provocation from Iran or whether Israel will take the lead in launching air strikes against Iran’s nuclear facilities.

A Quote from: The Dogs of War - Lessons of the 20th Century. By Victor Davis Hanson, (author most recently of Carnage and Culture: Landmark Battles in the Rise of Western Power):

“"I would not wish to fight the United States - either militarily, politically, or culturally. For every threat, our history teaches us that Americans offer not just a rejoinder, but the specter of a devastating answer of a magnitude almost inconceivable to those now chanting and threatening in the streets of the Middle East.

Do they have any idea of what sort of dangerous people we really are? Do they understand the history of the names of those ships now off their coasts, like the USS Peleliu or Enterprise, or the pedigree of the 82nd or 101st Airborne?"

In spite of all the reality above, the insane Islamofascist serial killers in charge of Iran are going ahead with naval war games in the Persian Gulf.

Missile units of the air and naval forces of the Islamic Revolution Guards Corps (IRGC) will begin a specialized wargame in southern and central parts of Persian Gulf and the Sea of Oman from Wednesday.

The announcement follows mounting tension with the United States, which has said it will step up pressure on Iran. This has included despatching a second aircraft carrier to the Gulf, a major shipping lane for oil exports.

The exercises will be staged on Wednesday and Thursday by the missile units of the Guards' naval and air forces, the semi-official Fars news agency reported, citing a Guards source.

Hey, what is causing all those bright lights and loud noises! 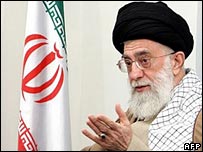 The nuclear bomb used at Hiroshima was puny compared to what we have ready for the Islamofascist serial killers in Iran:

An atomic blast demolished the centre of Hiroshima, Japan, on August 6,1945. Japan agreed to surrender after a second atomic bomb was dropped on Nagasaki on August 9. Al-Queda....Calling for Strikes on all Oil Interests ...Worldwide...

Better..... give bombs to Iranian students and others.. to set traps for the mullahs troops.. Attrition works both ways.. or even better the Iraqi gov't doing it..

Well we could do as the romans did. Conquer a nation, then tell the citizenry of such nation, " Give us half your youth and we will attack your former enemy" Which was brilliant because it took the sting out of their defeat and they attack in this case Iran... and so on and so on....