It was at Jeane Kirkpatrick's funeral this week that I finally heard of some good achieved by the United Nations amidst all its dithering and graft. According to Jeane's pastor, during her momentous tenure as our U.N. ambassador, Jeane was so wobbled by the international body's cynicism and moral emptiness that she forsook years of atheism and became a person of faith. Mind you, she had always had an abundance of secular faith before President Ronald Reagan tapped her for the United Nations. Her faith in the American way of life, its freedom, democracy and equality was as ardent as it was intelligently conceived. But after leaving the house of hustlers on the East River, she became deeply Christian; and religion gently informed all she thought and did thereafter.

Jeane has been the paradigmatic 20th century intellectual of the good sort. She began her intellectual life a socialist and an atheist. As those two sacred cows revealed their barnyard primitivism she reassessed the evidence. She became a Hubert Humphrey Democrat with her beloved husband, "Kirk," the legendary head of the American Political Science Association who through his tenure kept it a serious instrument of American scholarship. But by the 1970s many liberal Democrats were beginning their long dissipation into fantasy and the megalomania that we witness today. After a historic 1980 meeting with President Jimmy Carter, Jeane made it clear that enough was enough. Seeking the support of liberal intellectuals, Carter had summoned her and a handful of others into his pert presence. He worked his magic, and when she led her contingent of eggheads onto the White House front lawn she revealed to the waiting press corps the extent of Carter's political genius. For the first time in her life Jeane would support a Republican, Ronald Reagan. It was the beginning of a working relationship that led to deep friendship. Her respect for Reagan only deepened through the years.

With other liberal Democrats drawn mostly from the camps of Humphrey and Sen. Henry Jackson, Jeane came to be called a neoconservative. The movement began in the late 1970s and pretty much concluded in the late 1980s. Today's neoconservatives are mostly misnomers, the consequence of journalism's invincible ignorance. The original neocons broadened American conservatism and distinguished themselves by their independence of mind, their courage and their principled defense of the American way of life. They were very serious thinkers, often political scientists. Jeane and her husband, who had also been her teacher, fought for years to maintain high intellectual standards in academe.

This readiness for combat Jeane brought into her political life and to her wide-ranging intellectual interests. She was always a lady, never without refinement; but with her keen mind and natural courage she never flinched if principles were at stake. Her public defiance of bullies both in domestic politics and in the United Nations is well known. Less well known is the counsel and loyalty she gave friends under fire. On the board of The American Spectator she was true blue when the Clinton administration harassed us with its grand jury and its journalistic hacks. In board meetings she was equally stalwart when anyone tried to take advantage of her colleagues under siege. Jeane was very American. I recall one gloomy night with her at dinner when the Spectator's prospects seemed bleak. Softly and wryly she sang a line from an old American folk song, "Nobody loves ya when you're down and out." And as the dinner progressed the fire she had shone on the floor at the United Nations ignited: "You stick to your guns." Only one other person fortified me with advice like that, Lady Thatcher, who asseverated, "If you have nothing else you have your principles."

Jeane was a fine writer with a gift for the memorable line: "San Francisco Democrats," or "blame America first." The validation of her political writing was on display the week she died, most notably the validation of her "Dictatorships and Double Standards." Three days after her death the right-wing dictator Augusto Pinochet died, as a private citizen at home in prosperous, democratic Chile. In Cuba the communist dictator Fidel Castro is about to die, still a dictator, still a menace to the democratic West, and about to hand over his despotism to his communist brother. Twenty-seven years ago Jeanne predicted such a scenario.

Of all her achievements her most precious, however, was her achievement as mother and wife. She was devoted to her sons and to her husband. At her funeral one of her surviving sons recalled her telling him, "My strength is your father." Friends suspected as much. She cited Kirk often. Her son recalls a more recent declaration from her. With eight decades of growing virtue in her wake but tired by a weakening heart, she told him that that she would die in the bedroom of her Maryland home before her next birthday. And so she did.

Even the Washington Post, and NPR did a nice piece on her. 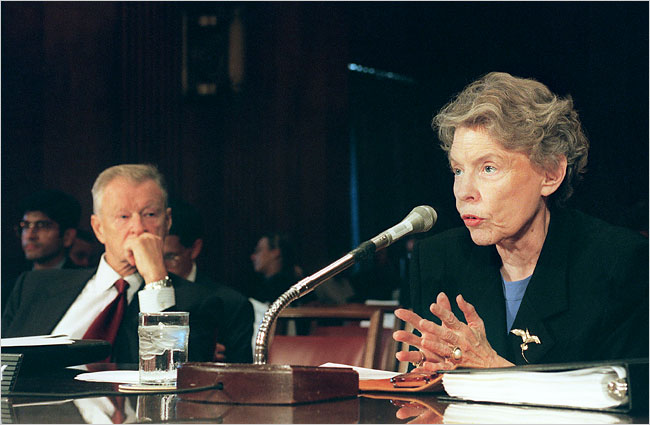 I saw her eviscerate Mike Wallace and Peter Jennings on "Ethics in America" during one of their roundtables. I don't recall exactly what the subject was, or the precise rhetoric she used, but these so-called wordsmiths were left knee-deep in their own guts before she was done with them.

Wow. Wish I had seen that collision.

Jeane was a big hero to me in the 1980s, just a step behind President Reagan. I read something about a possible memorial service for her in January. If it is in the DC area I hope I can attend.

Any updates on this?

Shortly after President Reagan announced Jeane's appointment, as I well remember, my sibling called her house to offer his congratulations. He got right through and spoke to Mr. Kirkpatrick, wishing them both well. That was surprising and exciting.