Four of the Gold Star parents who went on our trip to Iraq came to Washington, D.C. to report to Congress and the media what we all learned on the trip.

Surprisingly, the press conference was well attended by the media. There was a good mix of domestic and foreign news outlets there. We spoke for almost an hour and then conducted individual interviews. If you see any reports on the press conference let us know, we've so far seen this report in the San Diego Union Tribune -- (John Holley's hometown paper.)

After the press conference we piled into a couple taxis and headed off to the studio of G. Gordon Liddy for an interview on his radio show. Debra Argel Bastian, John Holley and Joe Johnson sat around a table with the G-Man for a live interview that aired in the first half of the noon hour eastern time. Gordon Liddy and his staff made us feel right at home. We might be able to get the interview up online in an MP3 format. After that, it was off to Capitol Hill for meetings.

First up was a briefing with Sen. Harry Reid's national security aide.

We spent a good half hour with her telling her about our observations on the situation in Iraq and the families' concerns that their sons' sacrifices, and those of the Iraqis would be squandered by a premature withdrawal of U.S. forces from Iraq. The aide to Sen. Reid gave us a respectful hearing and accepted a copy of the families' report. She sacrificed her lunch hour to accomodate our schedule, which we greatly appreciate.

Then we were off to the other side of the Hill to the House of Representatives where we met first with Rep. Phil Gingrey, the congressmen for the Johnson's Georgia district.

Rep. Gingrey and the Johnsons know each other well. We spent about twenty minutes briefing him on our trip and findings.

Our next meeting was with Rep. Steve King of Iowa. Rep. King has been a strong supporter of Operation Iraqi Freedom and his support has not wavered--he understands that victory is not an option, it's the only way to prevail in the Global War on Terror. Rep. King spent a good hour listening to the families and asking them questions about the trip and their thoughts on Iraq. He even put off a phone call from N.Y. Gov. Pataki to spend more time with us.

We then went to Rep. Duncan Hunter's office where he invited us to an early dinner at the Capitol Hill Club where we were joined by Rep. Billbray, also from California. 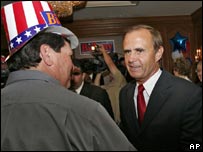 It was a welcome respite as we had been on the go since morning and had to skip lunch to keep to our scheduled meetings on the Hill. The day was capped off with a trip to the Warner Theater to see a special one-night-only performance by Rush Limbaugh. Rush's affiliate in Washington, WMAL-AM 630, gave the four Gold Star parents complimentary orchestra seats for the show. It was a great way to finish the day. Rush spoke about his visit earlier in the day to Walter Reed Army Medical Center and the Fisher House there.

He was deeply impressed by the high morale and dedication to the mission of the recuperating soldiers. The two hour show ended at 10 p.m. and the families went back to their hotel to rest up for today's business. Rep. Hunter invited them for breakfast and a private tour of the Capitol this morning.

Tonight, the Gold Star parents are scheduled to be live in studio on the Jim Bohannon radio show at 10 p.m. Eastern time. They should be on for the full hour. I'd like to once again thank all those who contributed to the Iraq trip. We're working hard to report back to the American people what we saw and learned over there.

Can you alert the people on the Iraq trip PING list? They had a hugely successful day yesterday!!

I'm so humbled by the activism and supreme efforts that have characterized the Washington, DC FReepers since the March for Justice in 1998.

Thank you all so much.

Thanks for all your efforts. The timing of this comes at an optimum time.

Kristinn, thank you and the others for taking time to go to Iraq. Thank you for all you do for America/Americans! Hopefully DC will pay attention to the facts you will, or have presented them with. Good job!! I appreciate it. :o)

Thanks for posting that, Impeach.

kristinn----you guys are magnificent for all you are doing...and I pray that Duncan Hunter and Gingrey, and King, really pay attention to what the families have said to them...

Unfortunately, I doubt that Harry Reid will care...

Thank you so much kristinn

You should see this!

Thanks for the ping Impeach!

God Bless the Gold Star Families. This is the media attention our boys need. Thank you for all your hard work.

That speaks for me too, Incorrigible.