When is the New York Times going to get around to uncovering an al-Qaida secret program?

In the latest of a long list of formerly top-secret government anti-terrorism operations that have been revealed by the Times, last week the paper printed the details of a government program tracking terrorists' financial transactions that has already led to the capture of major terrorists and their handmaidens in the U.S.

In response, the Bush administration is sounding very cross – and doing nothing. Bush wouldn't want to get the press mad at him! Yeah, let's keep the media on our good side like they are now. Otherwise, they might do something crazy – like leak a classified government program monitoring terrorist financing.

National Review has boldly called for the revocation of the Times' White House press pass! If the Times starts publishing troop movements, National Review will go whole hog and demand that the paper's water cooler privileges be revoked. Then there's always the "nuclear option": disinviting Maureen Dowd from the next White House Correspondents' Dinner.

Meanwhile, the one congressman who has called for any sort of criminal investigation is being treated like a nut. Don't get me wrong: Rep. Peter King is nuttier than squirrel droppings – but he's right on this.

Unless, that is, the country has simply abolished the concept of treason. We've got a lot of liberals who hate the country and are itching to aid the enemy, so what are you going to do? Indict the entire editorial board of the New York Times? (Actually, that wouldn't be a bad place to start, now that I ask.)

Maybe treason ended during the Vietnam War when Jane Fonda sat laughing and clapping on a North Vietnamese anti-aircraft gun used to shoot down American pilots. She came home and resumed her work as a big movie star without the slightest fear of facing any sort of legal sanction.

Fast forward to today, when New York Times publisher "Pinch" Sulzberger has just been named al-Qaida's "Employee of the Month" for the 12th straight month.

Before the Vietnam War, this country took treason seriously.

But now we're told newspapers have a right to commit treason because of "freedom of the press." Liberals invoke "freedom of the press" like some talismanic formulation that requires us all to fall prostrate in religious ecstasy. On liberals' theory of the First Amendment, the safest place for Osama bin Laden isn't in Afghanistan or Pakistan; it's in the New York Times building.

Freedom of the press means the government generally cannot place a prior restraint on speech before publication.

But freedom of the press does not mean the government cannot prosecute reporters and editors for treason – or for any other crime. The First Amendment does not mean Times editor Bill Keller could kidnap a child and issue his ransom demands from the New York Times editorial page. He could not order a contract killing on the op-ed page. Nor can he take out a contract killing on Americans with a Page One story on a secret government program being used to track terrorists who are trying to kill Americans.

What if, instead of passing information from the government's secret nuclear program at Los Alamos directly to Soviet agents, Julius and Ethel Rosenberg had printed those same secrets in a newsletter? Would they have skated away scot-free instead of being tried for espionage and sent to the death chamber?

Ezra Pound, Mildred Gillars ("Axis Sally") and Iva Toguri D'Aquino ("Tokyo Rose") were all charged with treason for radio broadcasts intended to demoralize the troops during World War II. Their broadcasts were sort of like Janeane Garofalo and Randi Rhodes on Air America Radio – except Tokyo Rose was actually witty, and Axis Sally is said to have used a fact-checker.

Tokyo Rose was convicted of treason for a single remark she made on air: "Orphans of the Pacific, you really are orphans now. How will you get home now that your ships are sunk?" For that statement alone, D'Aquino spent six years in prison and was fined $10,000 (more than $80,000 in today's dollars).

Axis Sally was convicted of treason for broadcasts from Germany and sentenced to 12 years in prison. Pound avoided a treason trial for his radio broadcasts by getting himself committed to an insane asylum instead (which I take it is Randi Rhodes' "Plan B" in the event that she ever acquires enough listeners to be charged with treason).

There was no evidence that in any of these cases the treasonable broadcasts ever put a single American life in danger. The law on treason doesn't require it.

The federal statute on treason, 18 USC 2381, provides in relevant part: "Whoever, owing allegiance to the United States ... adheres to their enemies, giving them aid and comfort within the United States or elsewhere, is guilty of treason and shall suffer death, or shall be imprisoned not less than five years and fined under this title but not less than $10,000."

The greatest threat to the war on terrorism isn't the Islamic insurgency – our military can handle the savages. It's traitorous liberals trying to lose the war at home. And the greatest threat at home isn't traitorous liberals – it's patriotic Americans, also known as "Republicans," tut-tutting the quaint idea that we should take treason seriously. 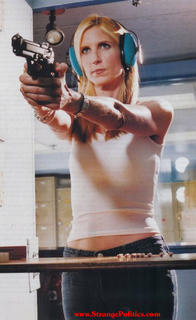 Where are you guys tonight?????

All kidding aside, that kinda says it all, doesn't it?

She's having fun being serious.

Sorry to hear that.

6 posted on 06/28/2006 6:53:05 PM PDT by somemoreequalthanothers (All for the betterment of "the state", comrade)
[ Post Reply | Private Reply | To 4 | View Replies]
To: Rummyfan
"In response, the Bush administration is sounding very cross – and doing nothing."

And, that's what they'll continue to do -- nothing!

If Vincente Fox doesn't tell him to go after the traitors, he'll not move a muscle.
7 posted on 06/28/2006 6:54:29 PM PDT by vetsvette (Bring Him Back)
[ Post Reply | Private Reply | To 2 | View Replies]
To: Rummyfan
"In response, the Bush administration is sounding very cross – and doing nothing. Bush wouldn't want to get the press mad at him! Yeah, let's keep the media on our good side like they are now. Otherwise, they might do something crazy – like leak a classified government program monitoring terrorist financing."

I've been saying this for weeks.

I think I know what "W" stands for.

This is the RNC monolith:

8 posted on 06/28/2006 7:05:20 PM PDT by Cobra64 (All we get are lame ideas from Republicans and lame criticism from dems about those lame ideas.)
[ Post Reply | Private Reply | To 1 | View Replies]
To: Rummyfan
In response, the Bush administration is sounding very cross – and doing nothing.

In response, the Bush Administration should be enforcing this:

The failure of the administration to punish the Times and others for treason is not just weak, it is a violation of the President's oath of office, to defend this country and enforce its laws.

People in positions of responsibility like President Bush do not have the luxury of shrugging their shoulders and letting things go. It is their duty to enforce the rule of law and to defend our country against deadly enemies, foreign and domestic.

By letting treason go unpunished, after a certain point President Bush becomes complicit in it. That point has long passed. If he had taken the Times to court the first time they committed treason, they might not have done it a second time, and a third time. They might not intend to do it again, the next time they get a chance.

It's up to we the citizens to hit them in the pocketbook!

Ann nailed it; so did you.

What caliber and yardage? ;^)

Kind of reminds me of 12 million illegal invaders. You can't deport em all, so why bother with any of them.

Stop being so ridiculous and trying to hijack this thread.

"What if, instead of passing information from the government's secret nuclear program at Los Alamos directly to Soviet agents, Julius and Ethel Rosenberg had printed those same secrets in a newsletter?"

Rather than let lawyers screw this up, here's a better executive order. It doesn't have to even be "ordered" by the President's lips. Just a shake of the head from several WH staff members and Pentagon brass would start a useful trend.

The POTUS can tell everyone in his branch to not use tax payer's money to purchase the NYT. Beyond just barring NYT reporters and canceling subscriptions to the White House, order that no military post exchange will carry the NYT. If a fed needs to know what traitors are publishing, let the funds to buy NYT come from the FBI budget used to find and track spies and turn coats.

Furthermore, the NYT shouldn't be displayed or even donated to a military library, doctor, or dentist's office. Yes, a military commanding officer can issue such orders since this rag of a newspaper is a weapon against the lives of their subordinates and their families.

Even better, other news agencies that choose to defend the nation that defends their right to life and free press CAN STOP USING THE NEW YORK TIMES AS A LITMUS TO NEWSWORTHY STORIES. That's right media folk, drop the NYT subscription and do what other American's do: get on-line, check several sources, block the extreme and obvious anti-American trash (and there are more publications than the NYT that are treacherous).

If there's still an interest in such publications like the NYT beyond it's own treasonous crowd, then it can be considered a "Barf Alert!" hobby...not just for a quick laugh, but because we can all use a good splash of cold water in the face that reminds us that the devil can exist in the hearts of mankind.
19 posted on 06/28/2006 10:50:16 PM PDT by SaltyJoe (A mother's sorrowful heart and personal sacrifice redeems her lost child's soul.)
[ Post Reply | Private Reply | To 1 | View Replies]
To: Polybius

When traitors are amongst us in a time of war, the executive branch has its hands full on all fronts. When those in our communities conspire to betray our efforts to our enemies, justice is sometimes our responsibility.

IMHO, each shareholder needs to receive, by certified mail, a copy of Secretary John Snow's letter to Bill Keller (http://www.freerepublic.com/focus/f-news/1656019/posts). Ditto for the president of each advertiser in the NYT, ditto for the director of every mutual fund holding shares in the NYT. The a similar letter should go to each employeee of the NYT-their letter should also have note of each advertiser, shareholder and fund director that has received this as well. This creates a ring of pressure...think of pinching Pinch...around the "leadership" at the NYT


IMHO, if this is accomplished SOMEBODY at the NYT will pop out the name of the leaker.....AND THAT IS OUR TRAITOR!