COLUMBUS, Ohio - Nevada Bishop Katharine Jefferts Schori became the first woman to lead any church in the global Anglican Communion when she was elected Sunday to be the presiding bishop of the Episcopal Church.

The choice of Jefferts Schori may worsen — and could even splinter — the already difficult relations between the American denomination and its fellow Anglicans. Episcopalians have been sparing with many in the other 37 Anglican provinces over homosexuality, but a female leader adds a new layer of complexity to the already troubled relationship.

Only two other Anglican provinces — New Zealand and Canada — have female bishops, although a handful of other provinces allow women to serve in the post. Still, there are many Anglican leaders who believe women should not even be priests.

Jefferts Schori was elected at the Episcopal General Convention, where delegates have been debating whether to appease Anglican leaders by agreeing to temporarily stop ordaining gay bishops.

In 2003, the Americans shocked the Anglican world by electing the first openly gay bishop — V. Gene Robinson of New Hampshire. Placing a female bishop at the head of the denomination could further anger conservatives worldwide and even within the U.S. church. And Jefferts Schori voted to confirm Robinson.

Episcopal bishops elected Jefferts Schori on the fifth ballot in a 95-93 vote from a field including six other male candidates; other General Convention delegates confirmed the choice.

The presiding bishop represents the Episcopal Church in meetings with other Anglican leaders and with leaders of other religious groups. But the presiding bishop's power is limited because of the democratic nature of the church. The General Convention is the top Episcopal policy-making body and dioceses elect their own bishops.

Jefferts Schori will inherit a fractured church. The Pittsburgh-based Anglican Communion Network, which represents 10 U.S. conservative dioceses and more than 900 parishes within the Episcopal Church, is deciding whether to break from the denomination. The House of Bishops recently started a defense fund that will help fight legal battles against parishes that want to leave and take their property with them.

Membership in the Episcopal Church, as in other mainline Protestant groups, has been declining for years and has remained overwhelmingly white. More than a quarter of the 2.3 million parishioners are age 65 or older.

Could you please correct my spelling in the title of "Episcopalians"?

Her husband must be a very proud man.

And why do you assume her husband is a man???

Her husband is a theoretical mathematician, and a man.

Katharine Jefferts Schori, 51, was consecrated the ninth Bishop of Nevada on February 24, 2001. She serves a diocese of some 6,000 members in 35 congregations. Jefferts Schori is the first woman selected as a nominee for Presiding Bishop.

Her service to the wider church includes current membership on the Special Commission on the Episcopal Church and the Anglican Communion; the Board of Trustees, Church Divinity School of the Pacific in Berkeley, California; the CREDO Advisory Board; the House of Bishops peer coaching program; the General Board of Examining Chaplains; the Board for Church Deployment; the House of Bishops' Pastoral Development, Racism, and Planning Committees; the Court for Review of a Trial of a Bishop; the Episcopal visitor team for the Community of the Holy Spirit; and the Bishops of Small Dioceses group.

From 2001-2003 she was a member of the 20/20 Strategy Group, and served as secretary of the House of Bishops Ministry Committee at the 2003 General Convention.

She is an active, instrument-rated pilot with more than 500 hours logged.

At the time of her election as bishop of Nevada, Jefferts Schori was assistant rector at the Episcopal Church of the Good Samaritan in Corvallis, Oregon, where she also served as pastoral associate, dean of the Good Samaritan School of Theology, and priest-in-charge, El Buen Samaritano, Corvallis. She was ordained deacon and priest in 1994. Prior to ordination, she was a visiting assistant professor at Oregon State University's Department of Religious Studies, a visiting scientist at Oregon State University's Department of Oceanography, and an oceanographer with the National Marine Fisheries Service in Seattle.

Jefferts Schori was born March 26, 1954, in Pensacola, Florida. She has been married to Richard Miles Schori, a retired theoretical mathematician (topologist), since 1979. They have one child, Katharine Johanna, 24, who is a second lieutenant and pilot in the US Air Force.

Well she does look pretty butch:

Like Bishop Alexander, Bishop Jefferts Schori’s tenure has been very brief, calling into question whether her experience is adequate for serious consideration as Presiding Bishop. She has kept a low profile in the media, and she does not appear to have taken hostile action against any orthodox that may be in her diocese. Her voting record at her first General Convention (2003) and subsequent public statements clearly define her as a committed revisionist. She shares other nominees’ understanding of truth as relative and echoes Frank Griswold’s view of pluriform reality and theology based on cultural context. In 2003, her diocesan convention address clearly redefines marriage and underscores that truth is ever evolving.

It also appears that Jefferts Schori had a strong influence on the Report of the Special Commission on the Episcopal Church and the Anglican Communion. Her emphasis on the fact that local option practice of same-sex blessings is not equal to official authorization by the church is a significant theme in the commission report. Bishop Jefferts Schori also highlights that unity in Christ and membership in the Communion is found not in a common faith but rather in a common baptism. In addition, she stresses the autonomy of provinces, another argument made by the report. Like, other candidates, she is clearly committed to a new consensus in the Communion that embraces progressive, revisionist theology.

She does not have enough experience to be a bishop, let alone an archbishop. In many denominations one would expect about 20 years parish experience before becoming a bishop or district president.

I recall two Methodist ministers (male) saying of their new district leader (a woman), "She wrote about prayer, so there's hope."

Wasn't "she" one of those male actors in 1980s comedy movies? She looks like it anyway.

It appears that she is married http://newark.rutgers.edu/~lcrew/elections/msg00087.html 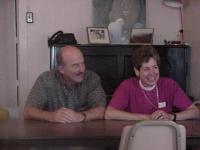 13 posted on 06/18/2006 2:57:25 PM PDT by BenLurkin ("The entire remedy is with the people." - W. H. Harrison)
[ Post Reply | Private Reply | To 5 | View Replies]
To: Saint Reagan
These people make me sick being so ignorant and arrogant about scripture and how GOD has commanded the church should be governed.

Nothing against women being leaders, but not in the church...Ep must say to themselves, "Oh God just couldn't be right about that, he doesn't want to discriminate!"

14 posted on 06/18/2006 3:13:13 PM PDT by sirchtruth (Words Mean Things...)
[ Post Reply | Private Reply | To 1 | View Replies]
To: Saint Reagan; madprof98
Not sure what the purpose of the Episcopal denomination is, nowadays. A few generations ago it was a nice 'faith and reason' community that didn't devalue the Bible, maintained a strong teaching tradition through schools like St.Mark's and St.Paul's, was fairly ecumenical in appreciating the traditions of both Catholicism and other denominations, and served as a key cultural institution for those of Anglo-Saxon heritage in America. Well, all that goes away if you let Leftists take over.

What many Conservatives don't seem to understand is that Conservatism is actually steadily militant; it continually organizes to make gradual improvement in keeping with the organic character of institutions. Conservatism doesn't retreat from Leftist incursions; it defeats them , imposes a penalty for the incursion, then continues the process of steady improvement. If one isn't civically active, one isn't a full Conservative. The Episcopal 'Church' in the U.S. must be purged.

Not another pluriformer! Can we look forward to more of the same gaseous word salads of ambiguity that we got from Frank?

Now we are smarter than God.

I have a feeling it soon won't be necessary to know how to spell "episcopalian", unless you're a history buff.

It is. Only it isn't Conservatives doing the purging.

Notwithstanding I have a few things against thee, because thou sufferest that woman Jezebel, which calleth herself a prophetess, to teach and to seduce my servants to commit fornication, and to eat things sacrificed unto idols.