AUSTIN — A University of Texas professor says the Earth would be better off with 90 percent of the human population dead.

“Every one of you who gets to survive has to bury nine,” Though his statements are admittedly bold, he’s not without abundant advocates. But what may set this revered biologist apart from other doomsday soothsayers is this: Humanity’s collapse is a notion he embraces.

Indeed, his words deal, very literally, on a life-and-death scale, yet he smiles and jokes candidly throughout the lecture. Disseminating a message many would call morbid, Pianka’s warnings are centered upon awareness rather than fear.

“This is really an exciting time,” he said Friday amid warnings of apocalypse, destruction and disease. Only minutes earlier he declared, “Death. This is what awaits us all. Death.” Reflecting on the so-called Ancient Chinese Curse, “May you live in interesting times,” he wore, surprisingly, a smile.

So what’s at the heart of Pianka’s claim?

6.5 billion humans is too many.

In his estimation, “We’ve grown fat, apathetic and miserable,” all the while leaving the planet parched.

That’s 5.8 billion lives — lives he says are turning the planet into “fat, human biomass.” He points to an 85 percent swell in the population during the last 25 years and insists civilization is on the brink of its downfall — likely at the hand of widespread disease.

“[Disease] will control the scourge of humanity,” Pianka said. “We’re looking forward to a huge collapse.”

Just thought I'd point that out, despite the phrase's inherent oxymoronic qualities.

I vote he leads by example. I'll supply the 12 gauge and the ammo.

This guy is simply following socialist logic to it's end.

Somehow I doubt he volunteers to save the earth from his own sorry carcass.

I'm sure he believes himself to be one of the needed great "thinkers" after the rest of us are gone.

In short terms, he's saying he's one of those Ultra-Leftwing, environmental Wacos who uses computors which have been fed total garbage to determine the future of Earth. When you feed the computor what you want it to conclude, guess what happens? You get what you want to the computor say. In other words: GARBAGE IN - GARBAGE OUT. 'Nuff said.

"I'm sure he believes himself to be one of the needed great "thinkers" after the rest of us are gone."

James Bond and Batman go up against villians who think this stuff all the time! LOL

Sounds like something that Hitler or one of his men would say. This is such garbage

9 posted on 04/01/2006 11:41:53 PM PST by Exton1
[ Post Reply | Private Reply | To 1 | View Replies]
To: 4U2OUI
A typical liberal tenured monster, infecting and warping the minds of our youth with their endless evil. Creeps like this are on almost every campus, and in great numbers. Get a load of this fiend: 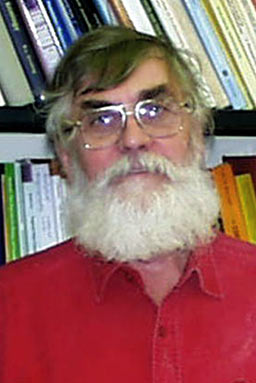 Or as we call it, Berkley on the Colorado.

In the twenty-first century, every paranoid moonbat will get his own news article.

Let me see, professors like him get to be the 10% who keep alive... a nice reflection & metaphore of what tenure godhoos bs at taxpayer expense is all about.

Performance & life is possible if one has a can do attitude & fights for accomplishing more than what is expected so as to excel on the expected job itself. These kinds of death cults are typical of the psychological warfare at college campuses, where those who believe they only need to do the minimum amount of work or give up end up never finishing or doing poorly, while those shooting & expecting above are extremely motivated & do well but are terrified if the competition had the same tricks and attitude.

Many good comments, but FReeper solutions are great. Thanks.

Liberals have a death wish. They want a return to Nazism. It's like a self-fulfilling wish that those in power can do or think about genocide. Their attacks on successful businesses or good politicians are just projection of a prejudice they have that the established powerful always wages something bad, because once in power of their little ghetto, that's what liberals would do, eat their own within the compound.

Another nut that will have to live with constant disappointment...

This scenario was envisioned twice in the last 20 years by two different authors.

Whitley Strieber (yes, the UFO nut) co-wrote an apocalyptic book about environmental collapse called "Nature's End" (1986). In the book, a world-reknowned "enviromental leader" suggested a suicide pill be given to everyone on Earth, with every tenth pill being a placebo.

The other author is Tom Clancy. In "Rainbow Six", a group of terroristic enviro-wackos develop a super-Ebola along with a vaccine that they give only to themselves. There are only a few of these people...but they want to kill the entire human population so their friends the animals can once more have free reign over the Earth.

(I love John Clark's solution, once they capture these wackos: He sets them free into the jungle they love, with the animals they adore...stark naked. Needless to say, it is implied that they do not survive.)

Also, if you look into the core beliefs of groups like PETA, ELF, and Earth First!, you will find that their eventual goal of human de-population is just the same as this insane professor.

I look at people like this and sincerely wonder how they can be so stupid, and still have brains capable of sending complex signals like INHALE...EXHALE.

For all the over-population myopic whiners: Take one daytime flight across the United States. Be sure to ask for a window seat. Look out window 100 times. Record what you see each time. Get back to me about overpopulation when you land.

I'm not for one moment agreeing with this professor, however with modern means of travel (where I can basically be in another continent within a day) and the way humanity is packed together (especially in parts of Asia, and the West) it would just take one good disease to really ravage the world. And the less developed areas have to watch out for famine (as well as the more developed areas as well ....think of this: if a world-wide pandemic hit, and the US was also affected, where would YOU get YOUR food from? Most people who live in the cities and sub-urbia get all their food from the Walmarts and what-nots in their neighborhood. Well, if a pandemic has hit all that stuff will come to a grind, thus where do you get your food? If you need insulin where do you get it? If you got sick the hospitals for one would be saturated. Most people rely on society being always perfect far more than they know, and if something went really wrong many people wouldn't even know what to do, what to eat, how to do anything).