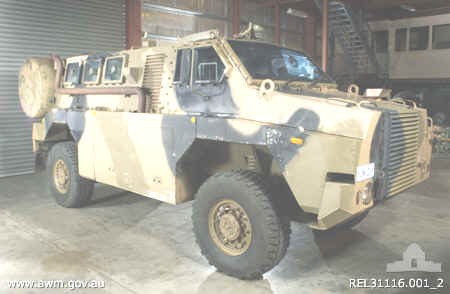 If our next conflict is in open country, Bradleys and Tanks will lead the way and the HumVee replacement will be called an overweight doorstop, unable to manuver in tough terrain.

The HumVee was never supposed to be an armored venhicl. It's a damned good replacement for the Jeep.

We need an armoured urban combat vehicle, they should be popular with police forces worldwide too, but that's not what the HumVee or its replacement needs to be.

3 posted on 03/29/2006 9:51:56 PM PST by Cannoneer No. 4 (Our enemies act on ecstatic revelations from their god. We act on the advice of lawyers.)
[ Post Reply | Private Reply | To 1 | View Replies ]
To: Cannoneer No. 4
All those "fatboys" are very nice, but if you read Robert Kaplan's "Imperial Grunts", a penetrating look inside the Special Forces community, they will pick the Toyota Land Cruiser over the HumVee.

The HumVee is too wide to get through the streets and alleys of the Afghanistan villages in the highlands. In one raid - the Americans traveled to the outskirts of town in Hum's and then transfered to the Afghan Forces Toyotas for the actual raid on a Taliban outpost in town. The Hum's couldn't get there!

I'll repost this with a page reference later!

Anyone have similar comments from cities in Iraq??

12 posted on 03/29/2006 10:36:02 PM PST by Cannoneer No. 4 (Our enemies act on ecstatic revelations from their god. We act on the advice of lawyers.)
[ Post Reply | Private Reply | To 1 | View Replies ]
To: Dundee
Oshkosh Truck Signs Agreement with ADI Limited of Australia to Offer Bushmaster(R) Armored Vehicles in North America

OSHKOSH, Wis., Mar 06, 2006 (BUSINESS WIRE) -- Oshkosh Truck Corporation (NYSE:OSK), a leading manufacturer of specialty trucks and truck bodies, announced today that it has added an armored vehicle to its stable of combat-proven military trucks. Under a licensing agreement with the vehicle's developer, ADI Limited of Australia, Oshkosh Truck will market, manufacture and support the Bushmaster armored vehicle for North American customers as well as countries eligible for Foreign Military Sales. Senior executives from both companies signed the agreement at a ceremony held at the Australian Embassy, on Friday, Feb. 24.

The Bushmaster was originally developed by ADI, in conjunction with the Australian Defence Force. The vehicle is mine-blast resistant due to its v-shaped hull, and its armor provides IED and ballistic protection to its occupants. The vehicle's mission profile requires it to travel long distances over rough terrain and deliver its occupants to their destination as safely and comfortably as possible, making them more effective in a tactical environment. There are currently over 100 Bushmaster vehicles in service with the Australian Defence Forces, with a number of the vehicles deployed with Australian units in support of Operation Iraqi Freedom. An additional 200 vehicles are under contract and scheduled for production at ADI's Bendigo (Australia) facility.

"The Bushmaster provides Oshkosh Truck with an even greater ability to support our customer through a wider spectrum of conflict", said John Stoddart, Oshkosh's executive vice president and president, defense. "As threats and the nature of conflict have evolved, the need for vehicles offering greater safety has grown. This vehicle can meet that need by not only improving troop safety, but delivering the level of performance the military expects from an Oshkosh vehicle."

Oshkosh plans to manufacture Bushmaster vehicles at its defense manufacturing facility in Oshkosh, Wisconsin, and can support significant volumes of Bushmaster vehicle production if required. ADI's Bendigo facility will work in conjunction with Oshkosh Truck to support any increase in demand.

Steps are also being taken to integrate components currently used on Oshkosh Truck's fleet of military logistics vehicles. This will increase parts commonality between the Bushmaster and vehicles currently used by the U.S. military, making it easier and less expensive for the U.S. military to supply logistics to a Bushmaster fleet. Oshkosh Truck is already providing logistics support to the Australian Bushmaster fleet in Iraq and Afghanistan through its global parts and service network.

Oshkosh Truck Corporation (NYSE:OSK) is a leading manufacturer of specialty trucks and truck bodies for the defense, fire and emergency, concrete placement and refuse hauling markets. Oshkosh Truck is a Fortune 1000 company with products marketed under the Oshkosh(R), Pierce(R), McNeilus(R), Medtec(TM), Geesink(R), Norba(R), Jerr-Dan(R), CON-E-CO(R) and London(R) brand names. The company is headquartered in Oshkosh, Wis., and had annual sales of $2.96 billion in fiscal 2005. To learn more about Oshkosh Truck Corporation, visit its web site at www.oshkoshtruckcorporation.com

I don't believe they've left out the famous "Herkimer Battle Jitney" the finest nonlethal combat vehicle ever made! I'd paste a pic if I knew how.

There were times I was just really happy to be a boot on the ground vs riding in any PG7 Magnet.......

Cougar, Buffalo, and RG-31 has been pretty promising as it proved its survivability in Iraq. GPV Commander is attractive for its ability, but rather a candidate of FTTS/FCS/APC for its size, replacing Stryker instead of Hummer. I rather see Buffalo as an APC rather than a multi-purpose vehicle. I would recommend ASV-150 Guardian as the best candidate. While it is several times more expensive than UAH, it costs less than Stryker, and is a four wheeled vehicle. It also has a turret on top which could install grenade launcher systems, and also automated gun system. The use of turret is a big advantage when considering threats from above, IED, and snipers as well. ASV-150 also has three levels of armor, which will allow ASV-150 to be used in non-combat missions without carrying extra weight of armor. While the cost may be concerning, its feature and price below Stryker will still allow mass production at affordinble price. LAV-150 also has a history used by foreign countries (ASV-150 is also used by ISF in Iraq), and could be something worth for exports, which will allow a cost down, improving its cost performance. However, Textron has been suffering damage from Hurrican Katrina. Let's hope they will get into the race replacing Hummers.

Just found this forum and wanted to throw in my two cents worth about these vehicles. If the idea is to replace the Humvee with a survivable and capable urban assault vehicle, I think attention needs to be given to Textron’s Marine Land System Armored Security Vehicle, Guardian. Looking at the other vehicles the chief design flaw is the vehicle’s box like silhouette. This would make any of those vehicles more vulnerable to effective impact damage from RPG and similar highly mobile anti tank style weapons. The angled profile of the guardian would deflect (ricochet) a projectile away from the vehicle. The gun turret projects an obvious threat that demonstrates the ability to defend itself while minimizing the exposure of the vehicle occupants to hostile fire. It seems to make sense to me to replace the Humvee, we need to have a quick, light armored vehicle that is capable of operating in a variety of environments and terrains. The Guardian looks like it fills the need to me.