..... Thus the reason I vote on ones record versus ones promises. Anything less is IMHO a risky bet at best. Such as the lesser of two evils concepts we are usually presented during an election. No polidiot is perfect, no polidiot deserves blind silent devotion. Politics has a human element as we all know and is fallible to the nth degree. Constant attention to it’s every act is the effort that must be maintained to preserve our beloved republic and liberty.

Just my opinion of course.

§ 9.32. DEADLY FORCE IN DEFENSE OF PERSON. (a) A person is justified in using deadly force against another: (1) if he would be justified in using force against the other under Section 9.31; (2) if a reasonable person in the actor’s situation would not have retreated; and (3) when and to the degree he reasonably believes the deadly force is immediately necessary: (A) to protect himself against the other’s use or attempted use of unlawful deadly force; or (B) to prevent the other’s imminent commission of aggravated kidnapping, murder, sexual assault, aggravated sexual assault, robbery, or aggravated robbery.

The five oldest and most trusted Islamic sources don’t portray Muhammad as a great and godly man. They confirm that he was a thief, liar, assassin, mass murderer, terrorist, warmonger, and an unrestrained sexual pervert engaged in pedophilia, incest, and rape. He authorized deception, assassinations, torture, slavery, and genocide. He was a pirate, not a prophet. According to the Hadith and the Qur’an, Muhammad and his henchmen plundered their way to power and prosperity.
Finding the occasional straw of truth awash in a great ocean of confusion and bamboozle requires intelligence, vigilance, dedication and courage. But if we don't practice these tough habits of thought, we cannot hope to solve the truly serious problems that face us -- and we risk becoming a nation of suckers, up for grabs by the next charlatan who comes along. -- Carl Sagan, "The Fine Art of Baloney Detection," Parade, February 1, 1987

The paradox of our time in history is that we have taller buildings but shorter tempers, wider freeways, but narrower viewpoints. We spend more, but have less, we buy more, but enjoy less. We have bigger houses and smaller families, more conveniences, but less time. We have more degrees but less sense, more knowledge, but less judgment, more experts, yet more problems, more medicine, but less wellness.

We drink too much, smoke too much, spend too recklessly, laugh too little, drive too fast, get too angry, stay up too late, get up too tired, read too little, watch TV too much, and pray too seldom. We have multiplied our possessions, but reduced our values. We talk too much, love too seldom, and hate too often.

We've learned how to make a living, but not a life. We've added years to life not life to years. We've been all the way to the moon and back, but have trouble crossing the street to meet a new neighbor. We conquered outer space but not inner space. We've done larger things, but not better things. We've cleaned up the air, but polluted the soul. We've conquered the atom, but not our prejudice.

We write more, but learn less. We plan more, but accomplish less.

We've learned to rush, but not to wait. We build more computers to hold more information, to produce more copies than ever, but we communicate less and less.

These are the times of fast foods and slow digestion, big men and small character, steep profits and shallow relationships.

These are the days of two incomes but more divorce, fancier houses, but broken homes. These are days of quick trips, disposable diapers, throwaway morality, one night stands, overweight bodies, and pills that do everything from cheer, to quiet, to kill. It is a time when there is much in the showroom window and nothing in the stockroom.

A time when technology can bring this letter to you, and a time when you can choose either to share this insight, or to just hit delete.

Remember, spend some time with your loved ones, because they are not going to be around forever.

Remember, say a kind word to someone who looks up to you in awe, because that little person soon will grow up and leave your side.

Remember, to give a warm hug to the one next to you, because that is the only treasure you can give with your heart and it doesn't cost a cent.

Remember, to say, "I love you" to your your loved ones, but most of all mean it. A kiss and an embrace will mend hurt when it comes from deep inside of you.

Remember to hold hands and cherish the moment for someday that person will not be there again. Give time to love, give time to speak, and give time to share the precious thoughts in your mind.

Life is not measured by the number of breaths we take, but by the moments that take our breath away.


How Liberal Or Conservative Are You?


The purpose of these videos is to inform, explain and enlighten people from all over the world about the TRUTH of the Quran and Muhammadan Islam.

The Video Series Table of Contents 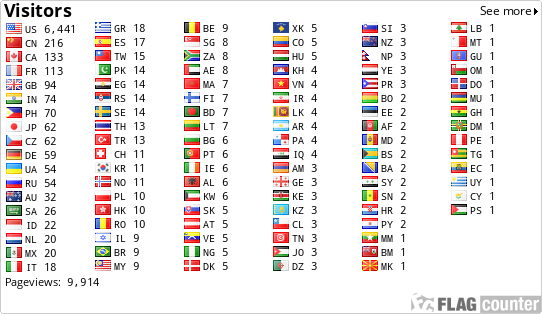 Every pirate lives for something different. For some, it's the open sea. For others (the masochists), it's the food. For you, it's definitely the fighting. Even though you're not always the traditional swaggering gallant, your steadiness and planning make you a fine, reliable pirate. Arr!
Get your own pirate name from piratequiz.com.
part of the fidius.org network