Set Condition 1 has some info on the contenders: Bushmaster meets the competition in the US

Airborne Combat Engineer notes The Army is looking at off-the-shelf vehicles and asks Why not buy an interim replacement for the Humvee?

UPDATE: I knew I'd seen another good post on the Humvee problem just recently. In an update to his post, Joe K points out Washington Park Prophet's, um, The Humvee Problem.

For the record, Murdoc isn't necessarily down on the Humvee. But Murdoc's down on the fact that our military seems to be reacting in slow motion to this problem.

Yes, the military is a massive bureaucratic juggernaut that's about as easy to turn as a loaded supertanker and I realize that it can't just replace the Humvee overnight. But it almost seems like the decision-makers are waiting it out, hoping that Iraq settles down soon enough to head off a major course change. This, of course, doesn't seem terribly likely to happen in the first place, and it ignores the fact that we'd then be facing our next military challenge with the same Achilles heel. Not to mention the number of lives and limbs lost between now and then.

...insurgent groups around the world are upping the number of bomb-makers in their.ranks... Similar to my position on Marines in Iraq using the lightly-armored Amtrac, I recognize that just up and switching vehicles because of a particular shortcoming in a particular environment isn't generally wise. But this environment is here to stay, as is the shortcoming, so it makes sense to make a few adjustments.

No light vehicle is ever going to be bomb-proof. Some of these IEDs blow tanks to pieces. But a vehicle better-suited to the environment would do wonders for the cause.

Do not forget that every potential enemy is eating the Humvee's performance up. Potential terrorist/insurgent/jihadists are stockpiling IED material as we speak. Just as the US military is increasing the number of special forces operators and snipers, insurgent groups around the world are upping the number of bomb-makers in their ranks, hoping (waiting) for a chance to blow a passing Humvee loaded with infidels to smithereens. You know it's true.

The HumVee was never supposed to be an armored vehicle. It's a damned good replacement for the Jeep.


Something few remember. How did we ever survive with the old Jeeps? Could it be that we knew they had no armor so we kept very alert for danger?
22 posted on 03/30/2006 3:25:18 AM PST by R. Scott (Humanity i love you because when you're hard up you pawn your Intelligence to buy a drink.)
[ Post Reply | Private Reply | To 2 | View Replies]
To: Cannoneer No. 4

Some mighty expensive looking vehicles there.

The US Rangers have already done this. The Humvee was too big, cumbersome and slow for special forces missions so they bought Land Rover Defenders for the role, very similar to the legendary 'pink panthers' used for decades by the SAS.

There were times I was just really happy to be a boot on the ground vs riding in any PG7 Magnet.......

25 posted on 03/30/2006 7:00:59 AM PST by Squantos (Be polite. Be professional. But, have a plan to kill everyone you meet. ©)
[ Post Reply | Private Reply | To 1 | View Replies]
To: Southack; globalheater; Cannoneer No. 4
Southhack has the right idea "Take the HMMWV, change its flat underbody to a V-hull with just enough armor to withstand running over a small ex-Soviet mortar, bullet-proof the sides and glass...". Hummers would still have to go on missions, but they would be better protected and that translates into fewer dead GIs.

Also look at the front bumper of the vehicle that globalheater posted-see the built in tow cable? Excellent idea. Otherwise I am not too sure about the vehicle as it appears to suffer from the same explosion absorbing flat bottom as the hummer.

Cougar, Buffalo, and RG-31 has been pretty promising as it proved its survivability in Iraq. GPV Commander is attractive for its ability, but rather a candidate of FTTS/FCS/APC for its size, replacing Stryker instead of Hummer. I rather see Buffalo as an APC rather than a multi-purpose vehicle. I would recommend ASV-150 Guardian as the best candidate. While it is several times more expensive than UAH, it costs less than Stryker, and is a four wheeled vehicle. It also has a turret on top which could install grenade launcher systems, and also automated gun system. The use of turret is a big advantage when considering threats from above, IED, and snipers as well. ASV-150 also has three levels of armor, which will allow ASV-150 to be used in non-combat missions without carrying extra weight of armor. While the cost may be concerning, its feature and price below Stryker will still allow mass production at affordinble price. LAV-150 also has a history used by foreign countries (ASV-150 is also used by ISF in Iraq), and could be something worth for exports, which will allow a cost down, improving its cost performance. However, Textron has been suffering damage from Hurrican Katrina. Let's hope they will get into the race replacing Hummers.

With additional armor, ASV-150 has survivability against RPG-7 (however, ability to drive after attack is another problem). I would also guess it will have at least better protection than hummers.

Exactly. Eliminating a general purpose utility vehicle because its not suitable for certain missions in certain environments is nuts. Every vehicle has some drawbacks. A v-shaped undercarriage is either going to raise the profile or reduce ground clearance. More armor will lead to suspension problems and much higher fuel consumption, etc.

Just as one example, exactly how many IED have we encountered in Afghanistan? That's just not a threat we're going to have to face in every future environment. We may fall into the fateful trap of fighting the "last war", because by the time the humvee is completely replaced, our involvement in Iraq is going to be much different than it is today.

Four soldiers were killed west of Asadabad, Afghanistan, on March 12, when an improvised explosive device detonated near their HMMWV during combat operations.

Four Soldiers died February 13 when a roadside bomb detonated near their Humvee during north of Deh Rawod, Afghanistan. Killed were:

Two of the killed were members of the 3rd Battalion, 7th Special Forces Group, Fort Bragg, North Carolina. They were:

One of the soldier killed was member of the Group Support Battalion. He was:

The fourth soldier killed was:

30 posted on 03/30/2006 8:27:06 AM PST by Cannoneer No. 4 (Our enemies act on ecstatic revelations from their god. We act on the advice of lawyers.)
[ Post Reply | Private Reply | To 29 | View Replies]
To: Southack
Running logistics and errands inside the wire is best done with non-tactical vehicles, but Snuffy is going to drive to the PX in whatever vehicle he can get.

There was that, but being alert 24/7 isn't possible. Also, consider that we had very high casualties in Vietnam (58,000 fatalities alone), Korea, and WW2 (first mechanized GP transportation in war).

The year and a half that it took us to smash Germany/Austria/Hungary in the First World War had enormous casualties, and armor was very rare.

Our fatalities were higher still in the War Between the States (only armor was on a couple of trains and ironclad warships).

So if you map U.S. fatalities over time versus armor, you'll see a declining fatality trend that coincides with a rising armor trend, overall (i.e. speaking very, very broadly).

But...that does not mean that we go to all armor everywhere.

It does show that it makes sense for GP vehicles to be bulletproof for small arms fire. It probably means that even our light GP vehicles should be designed with IEDs/mines in mind (e.g. V-hulls rather than flat bottoms).

It probably means that our existing APC's should all have slat fencing installed for RPG protection, too.

Of course, that's just one side of the equation: defense. Offense is still the way to win wars.

What we're all really doing is recognizing that our enemies don't want to face our offensive capabilities anymore. Rather than fight us in the air, enemy nations are mostly grounding their warcraft (e.g. Serbia 1999, Bosnia 1994, Iraq 1991, Iraq 2003, etc.). Then we noticed that our enemies didn't even want to use their tanks against our armor. Now we're seeing that even fanatical terrorists prefer to plant mines first to then later pray that we run over them...rather than fight our ground forces.

So really what we are facing are the reactions to our Offensive capabilities.

Nonetheless, we've still got to improve our defense.

Also, consider that we had very high casualties in Vietnam (58,000 fatalities alone)…


I don’t recall a lot of casualties from riding in jeeps. The casualties in convoys were in the trucks. It was easy to bail out of a jeep – no cab or doors. A lot of people were taken out in the M113 too for the same reason – they were unable to bail out quickly. By the time I left in 1968 we most often saw the troops riding on top of the carriers, including the Marine amtracs.
And yes, we've still got to improve our defense – but not at the expense of individual mobility.
33 posted on 03/30/2006 12:55:12 PM PST by R. Scott (Humanity i love you because when you're hard up you pawn your Intelligence to buy a drink.)
[ Post Reply | Private Reply | To 32 | View Replies]
To: R. Scott; Southack

Surely one of your points above is that we can do *better* than back then (not knocking what we did back then, just acknowledging that our tech and tactics and training are better now).

Perhaps we limit recon and scouting in hot zones to Strykers...separating those tasks from general purpose errands and such for existing HMMVW's.

36 posted on 03/30/2006 3:43:46 PM PST by Southack (Media Bias means that Castro won't be punished for Cuban war crimes against Black Angolans in Africa)
[ Post Reply | Private Reply | To 34 | View Replies]
To: Vectorian
The Humvee was too big, cumbersome and slow for special forces missions

Gee, I wonder what the GMV program was all about.

The faults with the HMMWV are: small internal relative to external volume; poor fit in the CH-47 and MH-47; undeniable US- and client-only vehicle. That, and two different complete sets of drivetrain parts, down to the rims and tires, which guarantee you to have the wrong parts at any given time.

The vehicle you link replaced not HMMWVs but a mixed bag of armed and roll-caged M151s, Toyota HiLux pickups, and Chenoweth sand rails, that were intended for mostly on-pavement activity such as airfield seizures.

OK, What is wrong with that picture? lol
Why is that barrel pointing at the M113 in front of it!

Judging from the tarp laying over the gun, I would say the photographer is a track rider and not a TC. 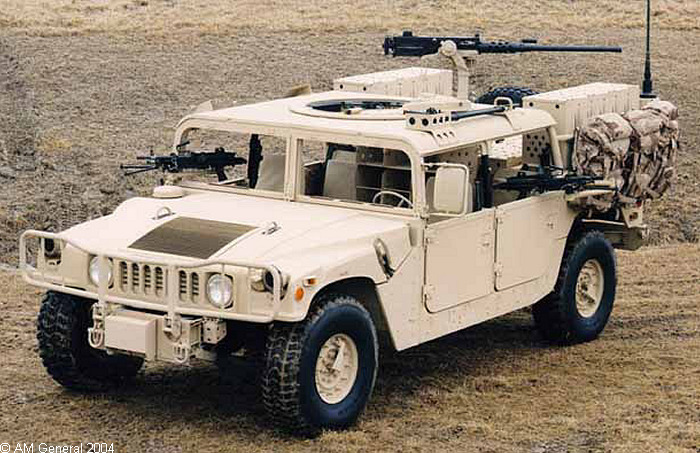 But whatever happened to the Armored Ground Mobility System?