The painting was believed irreparable after the 1997 Umbrian earthquake. A remarkable new computer programme has helped conservators piece it back together


By Edek Osser and Emma Beatty

ASSISI. A fresco by Cimabue, believed destroyed in the 1997 earthquake, has been partially reconstructed from thousands of fragments. It is to be reinstalled in the Basilica of St Francis next March. The restoration is the last in an extraordinary eight-year conservation project co-ordinated by the regional government of Umbria and the State-run Istituto Centrale del Restauro in Rome, and financed by the State.

The 1997 earthquake wrought extensive damage to the 13th-century basilica, which is decorated with an extraordinary cycle of frescoes by Giotto which tell the story of Saint Francis along the length of the nave. The vault in the upper basilica partially collapsed bringing two diagonally opposite quadrants in the east end and nave of the main vault crashing 22 metres to the floor, where they broke into thousands of pieces. Both contained triangular frescoes measuring about 35 square metres, one was Cimabue’s Saint Matthew and the other was decorated with a picture of Saint Jerome by an unknown Roman contemporary of Giotto. Giotto’s fresco cycle escaped relatively unharmed, however.

Immediately after the quake, work was done to secure the building against continuing tremors that continued until June 1998. Once these stopped, the structure was stabilised and conservation began on the damaged frescos that remained on the church’s walls, including repairs to Giotto’s cycle and some 1,000 square metres of painted space in the rest of the church.

The church reopened in 1999, but the two damaged cross-arch bays remained only partially restored with some of the original painted bricks; the bulk of the original frescos remained as thousands of fragments in storage. Debate raged as to whether they could ever be reconstructed or whether copies should be painted in their place.

Writing in The Art Newspaper in 1999, the art historian Bruno Zanardi argued that there was a “moral duty” to reconstitute Cimabue’s Saint Matthew, which he described as a “priceless example of Western figurative art”. But he questioned whether the recovered fragments should be left to “float” against an empty grey background. This would be an “irremediably false authenticity”, he said, “we would be enshrining a damaged image in the heart of one of the most exceptional monuments to art and faith in Western civilisation”. He advocated that exact copies of the works be painted, and the fragments placed in a museum.

Work slowly progressed meanwhile on cleaning and identifying the fallen pieces and conservators began to reassemble the smashed image of Saint Jerome of which some 80,000 fragments were recovered. By September 2002, 50% of these had been reconstructed in a neutral plaster base, and the recomposed image was reinstalled in the Basilica’s roof.

Conservators were now ready to confront the biggest and final obstacle: the rebuilding of Cimabue’s Saint Matthew. Giuseppe Basile, who has directed the conservation from the start, said that his team could not decide whether it was worth trying to reconstruct the entire fresco. “In the end, we decided to try, because it seemed such a shame to leave the ceiling without its fourth evangelist. The idea of replacing the fresco with a giant photo or painted copy were ruled out. Even the friars disapproved of these ideas. They considered the image of Saint Matthew a relic.”

“The task of rebuilding Saint Matthew was complicated by three factors,” he says. “First, Cimabue’s fresco was already in very bad condition before the earthquake. It was a faded monochrome of grey and brown which made it difficult to identity the fragments. Second, Cimabue’s plastering technique was not as sophisticated as Giotto’s; the fresco was less stable and broke into much smaller pieces than any of the other damaged murals in the basilica; there were 120,000 pieces. Third, the minuscule chips had very rough edges that would be difficult to match. Even with the aid of a computer, the task of reconstructing St Matthew was on the limits of possibility,” said Mr Basile.

Over a three-year period, a team of 20 conservators used a specially written computer system devised by the Culture Ministry. The system allowed them to manipulate digital facsimiles of the fragments on top of a life-size photograph of the fresco before it fell. The operators could move and rotate the pieces in all directions to find their correct place. There were also “virtual containers”, digital folders that corresponded to each of the hundreds of crates of fragments, so that the facsimiles could be tracked back to their physical correspondents for the final restoration.

Another advantage of the system was that many different experts could jointly use the system from anywhere in the world and co-operate on the recomposition process.

A database of fragments was slowly built up, allowing the restorers to use a “search engine” facility, whereby the computer could select other fragments that matched ones already identified and suggest possible locations for them.

The completed reconstruction is composed of 25% of the original material set into a ground of plaster. The lacune are filled using a neutral colour mixed to match the chromatic qualities of the original. The result is far from perfect, says Mr Basile, but from ground level (the vault is 22 metres high), it is hoped that the reconstruction will give a good sense of the original. Some parts are remarkably legible; the city of Judea was reconstructed almost in its entirety as was the saint’s throne and tunic. There were minimal traces of the two angels, however, and very little is left of Matthew’s face, hand and book.

In March the public will be able to see what remains of Cimabue’s Saint Matthew when it leaves the workshop to be installed.

The restoration of Assisi’s basilica will then be complete. Only the starry blue sky along the centre of the main roof remains damaged. It was repainted in the 19th century and conservators have decided not to restore it.

Let Sam Cree or me know if you want on or off this ping list.

5 posted on 11/27/2005 10:11:14 AM PST by Republicanprofessor
[ Post Reply | Private Reply | To 3 | View Replies]
To: blam
Certainly the hand of the Almighty guided this intricate, tedious and almost impossible reconstruction program.

My little thanksgiving prayer is sent up to heaven for the devoted efforts of the talented and dogged restorers.

Some sad, but some very glad news.

7 posted on 11/27/2005 10:26:03 AM PST by Bahbah (Free Scooter; Tony Schaffer for the US Senate)
[ Post Reply | Private Reply | To 1 | View Replies]
To: blam
which is decorated with an extraordinary cycle of frescoes by Giotto which tell the story of Saint Francis along the length of the nave

Actually, there are a great number of art historians who see this "extraordinary cycle" as being by a follower of Giotto and not by Giotto himself. 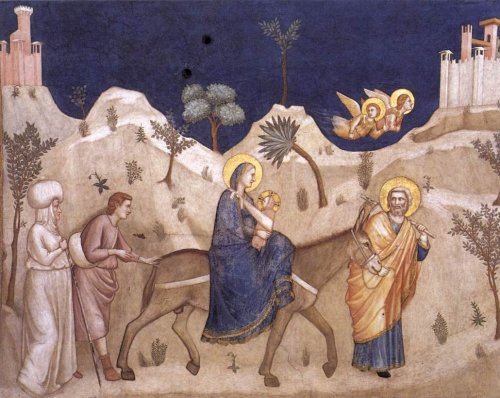 Above we have a scene from the St. Francis cycle at Assisi (by an imitator of Giotto), Giotto's Flight into Egypt from the Arena Chapel in Padua (certifiably by Giotto), and then the same subject by another copier of Giotto in the lower church at Assisi.

Just look at the composition: Giotto has no distracting, unnecessary forms in cities, architecture, extra trees or anything. The way he has arranged the forms are monumental and wonderfully simplified: note that huge mountain making Mary seem taller and grander and not bent over. The forms are more gently shaded and rounded, and the figures feel heavier and have more mass. The landscape is more terrifying in the real Giotto, and Joseph, old as he is, looks very humanly at the younger, more spry servant. Also, look at the babies: which Jesus seems more alive? One looks like he was stolen from a creche.

The church of Assisi is still a splendid church, on two levels, and I'm thrilled they are restoring it so thoroughly. I just take issue with the Italians who always claim that Giotto painted several fresco cycles there despite the visual evidence that the style is very different and not up to Giotto's standards.