PARIS, Oct 31 (AFP) A call for a change to a century-old French law to allow the state to fund new mosques has sent sparks flying in a society deeply attached to the separation of religion and state.

Concerned that a shortage of mosques is allowing extremists to gain a foothold among Frances 5.5 million Muslims by funding places of worship, Interior Minister Nicolas Sarkozy earlier this month named a panel to look into the prickly question.

Due to report to the government in June next year, the committee is being asked, among other things, to suggest ways of reviewing the 1905 secularity law that bans the state from funding places of worship.

The initiative placed Sarkozy squarely at odds with both President Jacques Chirac and Prime Minister Dominique de Villepin, who sees the century-old law as one of the pillars of our republican system and rejects the idea of updating it.

True, more work is needed to recognise the rightful place of Frances Muslims, Villepin said, but as members of a strictly secular community.

The two men, rivals both aiming for the presidency in 2007, tried to smooth over their differences on this and other matters at a joint press conference this week.

Sarkozy has repeatedly argued that breaking the French taboo to provide public money for mosques and imams would be the best way of bringing the Muslim community into the mainstream, out of the garages and basements it is often forced to use as unofficial prayer rooms.

"To separate French Islam from foreign influences," he said last month, "let us give it the means to be independent."

Islamic radicals are already thought to control 20 mosques in the country, according to Frances domestic intelligence service, which also says militants are increasingly congregating in secret prayer-rooms, out of sight of the authorities.

A year after a hotly-disputed ban on Muslim headscarves and other religious signs came into force in French schools, the debate on funding is the latest in a string of delicate negotiations between Frances government and its large Muslim minority.

Despite Frances reluctance to be seen as supporting any religious group, concerns over the rise of Islamic extremism have led it to take a more and more active role in the affairs of the Muslim community in recent years.

Two important steps have already been taken to bring greater transparency to the way the religion is funded.

In 2003, French Islam obtained its first ever officially-recognised representative body, the French Council for the Muslim Religion (CFCM), which has responsibility for issues ranging from the funding of mosques to the ritual slaughter of animals.

Now a recognised public institution, it is the governments main point of contact with the Muslim community.

And in June this year a government-backed "Foundation for Islam" was also set up to oversee the financing of the religion in France, grouping private donations from France and abroad, held in a state-owned bank to ensure maximum transparency, to pay for building and renovating mosques as well as training imams.

Many in the political establishment are against taking the states role any further, including the CFCMs president Dalil Boubakeur, rector of the Paris mosque, who immediately backed Villepin in opposing any change to the secularity law.

But other voices within the CFCM took a less hostile view and the influential rector of the Lyon mosque, Kamel Kabtane, supports a review of the 1905 law.

Among the majority Roman Catholic Church, the conference of bishops said it believed the current church-state balance should be upheld, but did recognise that certain "practical problems" needed tackling.

The response from other religious groups has been mixed: Protestant leaders said they would welcome a rethink of the law, but Jewish community leaders have come out against any change.

A collective groan rose from the press following Sarkozys announcement with the conservative Le Figaro warning it would fuel the tug-of-war between his camp and followers of Chirac and Villepin, already at odds over economic policy and such issues as Turkeys bid to join the European Union.

The left-leaning Liberation said the debate could easily turn into a slinging match, in a country still bruised by a fiery, painful debate over the Islamic headscarf in schools.

Meanwhile, the opposition Socialists scolded the government for sending out mixed messages on such a sensitive issue, and urged the president and prime minister to keep their ministers in check.

IMO France has too many mosques and too many Muslims now.

Funding more will only bring more. They are in deep doo-doo and dont even realise it. 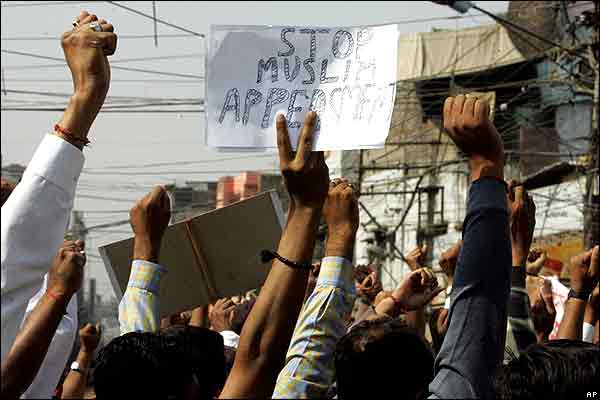 A couple more decades Islam will be France's state religion!

"Sarkozy has repeatedly argued that breaking the French taboo to provide public money for mosques and imams would be the best way of bringing the Muslim community into the mainstream, out of the garages and basements it is often forced to use as unofficial prayer rooms"

the aclu couldn't have said it better

Yeah, thats right frogs, go ahead and build them a brand new mosque paid for by the very people that are the targets of this islamofascist hate. The frogs are financing their own destruction with this politically corrrect act of appeasement. What other country in the world would finance their own demise? The ragheads will be smiling all the way to Allah.

Mass Murderers tend to make their victims dig their own graves, I see that it is still true.

France is not just selling the rope to their hangman, they're giving it away free.

Seems to me the solution is to quit importing Moslems and to "clip" those who already live there. Then more mosques won't be needed.

Why not just let the Saudis build hundreds of gleaming mosques, just like they do in this country?

11 posted on 10/31/2005 4:40:21 AM PST by Gritty ("There are no 'civilians'. You are either the House Of War or the House Of Islam - Hani Al-Siba’i)
[ Post Reply | Private Reply | To 1 | View Replies]
To: Cornpone
Islamic radicals are already thought to control 20 mosques in the country, according to Frances domestic intelligence service, which also says militants are increasingly congregating in secret prayer-rooms, out of sight of the authorities.

But the big question is if the French government finances the mosques do they then get veto power over the appointment of clerics.

If the French government appoints the clerics will the Muslims follow then appointed clerics.

To allow the genocidal brainwashing of the young and vulnerable by these subhumans is suicidal.

"... the French Council for the Muslim Religion (CFCM), which has responsibility for issues ranging from the funding of mosques to the ritual slaughter of animals."

Watch out -- if this keeps up in 10 years CFCM will have control of the ritual slaughtering of Christians and Jews.

This is almost as idiotic as allowing the muslims to recruit converts in the American prison system...

Oh, I forgot, this is France.