LAS VEGAS -- A man accused of killing two tourists and injuring 12 others on the Las Vegas Strip told police he steered his car into the crowd on the sidewalk because they were staring at him like demons.

Stephen M. Ressa, 27, also told police he saw people with their hands in their pockets and thought they might be armed with guns, according to an arrest report obtained Friday by The Associated Press.

"They were staring at him like they were `demons,'" the report said. "Ressa admitted he became angry at them, and intentionally steered the vehicle toward them."

Ressa, of Rialto, Calif., was arrested Wednesday shortly after the car barreled through the crowd and crashed into a cement barrier in front of Bally's hotel-casino. He was being held without bail on suspicion of murder and attempted murder.

Six of the victims remained hospitalized Friday, with one listed in serious condition.

Ressa is also suspected in a near-fatal attack on his mother two days before the crash, though he has not been charged in that case. His father said the family had been "living in fear" of Ressa, a former star baseball player, and had tried to get him treatment and counseling.

In two interviews, Ressa told detectives he had borrowed his mother's burgundy Buick and drove to Las Vegas, where he spent a few days gambling and slept in the car. Police described the car as stolen.

Well you can't just go running over democrats willie nilly. Can You?

After my last bottle of Ripple and Thunderbird, I was seeing "things" too! 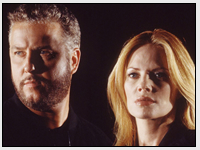 Damn. Of course, Grissom
would have been able to spell
sulfur correctly . . .

Sounds like he be a user of da crystal meth

I didn't know Streisand was playing in Vegas. You're probably right. A psychiatrist's comparison of psychotics and neurotics that I remember from many years ago goes, "A neurotic builds castles in the sky; a psychotic lives in them." The term, "a psychotic lives in them" means that, when a psychotic has a delusion, he or she immediately, totally believes it, and is obsessively compelled to act on it just as fast. That might be what happened here.

Tips for the youngsters:

DON'T SAY "staring at me like demons", DO SAY "they were demons"

DON'T SAY "might have had a gun in his pocket", DO SAY "had snakes for hands"

Google that term and "meth" for some interesting reading.

I guess the driver was out of bubblegum.

You've got that right. He's full of it.