TRENTON, Aug. 3 - Senator Jon S. Corzine provided a $470,000 mortgage to the president of a union that represents thousands of New Jersey state employees in late 2002, then forgave the debt two years later.

The union president, Carla Katz, was Mr. Corzine's girlfriend at the time. The senator said on Wednesday that an investment company he owns gave her the mortgage, then canceled it in December 2004, several months after they had stopped dating.

The loan was not illegal, and Mr. Corzine said he took care of the required gift tax on the money he ended up giving to Ms. Katz.

But if Mr. Corzine succeeds in his race for New Jersey governor this fall against the Republican candidate, Douglas R. Forrester, he could find himself negotiating opposite Ms. Katz, whose union, Local 1034 of the Communications Workers of America, represents 9,000 state workers and is one of a handful of labor groups that will seek billions of dollars from the state for wage increases and a bailout of the state's troubled health care and pension funds....

The democratic party in one word.

Gee, the NYT forgot to put his (D New Jersey) in there where it belongs

Hey, next thing you know the Times will change the names to protect the innocent.

Kind of like John Edwards selling his DC townhouse to a Saudi National and retainin $100,000 earnest money deposit. Deal fell through months later and Edwards kept the money.

Sorry, I don't remember the whole story, but wasn't one of the issues the MSM and Dims kept making such a big deal about wrt Duke Cunningham was a mortgage loan to a friend and/or supporter?

Vindication that I don't live in the most corrupt state in the union (MI) although it seems it at times.

Just an oversight I'm sure. NOT!

but, it was a personal payoff, not political.

talk about being in bed with someone...

anyone live in a state whose pols aren't so sleazy?

9 posted on 08/03/2005 9:02:49 PM PDT by VeritatisSplendor
[ Post Reply | Private Reply | To 2 | View Replies]
To: granite
"The senator said on Wednesday that an investment company he owns gave her the mortgage, then canceled it in December 2004, several months after they had stopped dating."

As I read this, I had to think of the viciuos racial envy that Jesse Jackson must feel; "whitey can get it on and then give her a half million out of his own pocket with no problem and I gotta swipe three hundred K from one of my charities to buy Shanequa and her brat a house in California, that's racism in America!"

Shouldn't the MSM be screaming for Corzine to apologize and then resign or is this another one of those Liberal double standard things?

Proof -- that the Democrats and Unions have been "in bed" together from day 1!

The senator said on Wednesday that an investment company he owns gave her the mortgage, then canceled it in December 2004

wouldn't SEC be interested in that kind of activity?

Land records at the Hunterdon County clerk's office show that on Dec. 18, 2002, Ms. Katz was granted a $470,000 mortgage from JSC Investments L.L.C., a company owned solely by Mr. Corzine. A deed filed in the clerk's office indicates that Ms. Katz used $361,000 of the loan to buy her husband's share of their home in Bloomsbury, N.J. Ms. Katz and her husband, Larry McKim, later divorced.

Then on Dec. 9, 2004 - one week after Mr. Corzine formally began his candidacy for governor - the mortgage was canceled.

Mr. Corzine said the timing of the mortgage cancellation was coincidental. After a busy year spent in the Senate and preparing to run for governor, he said, he did not pay close attention to his financial matters until mid-November. As he reviewed his finances, he said, he decided to forgive the loan because Ms. Katz was facing significant financial pressure.

"I didn't want to leave her with a difficult financial burden," he said. "I had the ability to help her, so I did."

Both Mr. Corzine and Ms. Katz said that the money had nothing to do with the union's endorsement of his campaign and that it was given with absolutely no stipulations or promises

"Zero," said Mr. Corzine, who has enjoyed wide support among union leaders in New Jersey and in Washington since his election to the Senate in 2000.

Mr. Corzine said he did not think their financial dealings would present even the appearance of a conflict of interest because Ms. Katz is one of several major union leaders who negotiate with legislators and members of the state administration. Her union represents more than 16,000 members in New Jersey in the public and private sector, according to its Web site, making it the largest of the union's locals in the country....

COMMENT: Nothing undercuts our legal system as the unfair administration of justice. Democrats feel they are exempt from legal accountability for their actions. Corzine should not be immune from prosecution. From an election perspective, this is a disqualifying event. 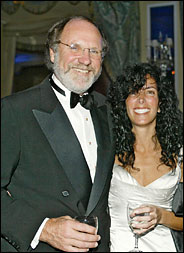 Senator Jon S. Corzine with Carla Katz at a ball in the
Pierre Hotel in 2002. Photo By Rick Bard, New York Times

Sigh. Well, look at Corzine and Katz---the happy couple. Seems like old times----reminds one of the McGreevey--Golan Cipel prom picture.

Golan Cipel----ex-Gov McGreevey's love bug who he installed as the state's $110,000 Homeland Security director but Golan could not get security credentials b/c he was an Israeli.

I wonder if Carla is an American? If not, no problem. Corzine could install her as Homeland Security Director (poster laughs uproariously).