Cruise a kook? Check out these gems from L. Ron's FBI file

JUNE 24--As Tom Cruise and his Scientology cohorts show Katie Holmes the religion's ropes, they surely won't be spending any time focusing on L. Ron Hubbard's wonderfully entertaining FBI file. Which, of course, is TSG's job. This Hubbard guy, the bureau documents reveal, was quite a raving lunatic (who could have imagined?). When he wasn't diming out a supposed Nazi, beefing about his wife, or complaining about being harassed by Cuban commies, Hubbard wrote to the FBI about a bizarre home invasion. Hubbard, the guiding light to nitwits like Cruise, John Travolta, Kirstie Alley, and Lisa Marie Presley, told agents in a May 1951 letter about being attacked in his crib. After being knocked out by the intruder(s), the science fiction author claimed, a needle was "thrust into his heart to produce a coronary thrombosis and he was given an electric shock." Little wonder Cruise & Co. are so down on electro convulsive therapy considering what happened to this poor mother Hubbard, who died in 1986 at age 74. Here are some excerpts from L. Ron's FBI file, which we obtained via a Freedom of Information request:

Blowing The Whistle On A Supposed Nazi (1 page)

A Plea For Red Protection (1 page)

Silly Pitiful Puny Human!!!!! You will be DESTROYED!!!! 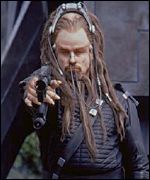 This is one hell of a cult.

Hey! He was a con artist, not a nut job. The followers are nut jobs.

Scientology was invented so the Jehovah's Witnesses would have someone to laugh at.

I now know much more than I wanted to abt L Ron, Scientology, Branch Davidians, and especially greta, david koresh, etc.

Scientology can be called the exact same thing , and more.

13 posted on 06/25/2005 12:09:18 AM PDT by Ronin (When the fox gnaws.... SMILE!!!)
[ Post Reply | Private Reply | To 6 | View Replies]
To: monkapotamus
After being knocked out by the intruder(s), the science fiction author claimed, a needle was "thrust into his heart to produce a coronary thrombosis and he was given an electric shock."

He had quite a Navy career also. Relieved of command twice, depth charged an imaginary submarine, and shelled some Mexican fishermen, provoking an international incident.


Hubbard's wife claims that medical advisors recommended that Hubbard be admitted to a private sanatorium and treated for paranoid schizophrenia.

Psycopolitics - The art and science of asserting and maintaining dominion over the thoughts and loyalties of individuals, officers, bureaus, and masses, and the effecting of the conquest of enemy nations through "mental healing." This book was used in underground schools, contains the address of Beria to the American students in the Lenin University prior to 1936, and in training of Communist cadre.

Set everything aside and I still never cared for Tom Cruise as an actor or considered him handsome.

Don't care for his Nicole Kidman as an actress either.

Now his first wife I really like as an actress. Can't think of her name of hand.

He once said "If you really want to get rich, start your own religion".