Controversial Italian journalist Oriana Fallaci is to face trial for allegedly insulting the Muslim faith in her latest book, a court in Italy says. Ms Fallaci is being sued by the head of the Muslim Union of Italy, who says The Force of Reason is defamatory.

The journalist caused an uproar with The Rage and the Pride, published two weeks after the 11 September attacks.

In it, she said Western culture was superior to Islam and Muslim immigrants in the West had "multiplied like rats".

Her lawyers have defended her right to express controversial opinions.

"At the heart of her thinking is the following reasoning: the fight against Islamic terrorism is made more difficult by intellectual terrorism cloaked in anti-racism," Gilles Goldhagen, said in 2002, when a French judge was hearing a case to ban The Rage and the Pride.

The Force of Reason is said to have gone to print about 24 hours after the 11 March 2004 train bombings in Spain.

In it, Ms Fallaci argues that Europe is turning into "an Islamic province, an Islamic colony" and that "to believe that a good Islam and a bad Islam exist goes against all reason".

Italian preliminary investigative judge Armando Grasso ordered the formulation of charges against the author, saying the book had expressions which were "unequivocally offensive to Islam".

Adel Smith, president of the Muslim Union of Italy, sued the writer on 8 April 2004. He says Ms Fallaci has been advocating and spreading hate against Islam and Muslims, sometimes by allegedly distorting real historical facts and inventing others.

The case is being tried in the northern town of Bergamo, where the book was published. The prosecution has 10 days to come up with a charge.

Ms Fallaci, who lives in New York, was a Resistance fighter in World War II and a former war correspondent. 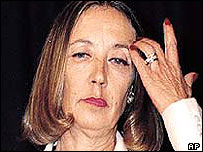 Oriana is not only my favorite writer. She's my woman model. I stand with her.

Hope she stays alert and keeps low because the "Religion of Peace" will be out to get her.

(I'd love to be called as a witness in this trial!)

I second that emotion.

Oriana, know the freepers are with you! At least a whole lot of us are!

4 posted on 05/25/2005 5:23:30 AM PDT by jocon307 (Legal immigrant Irish grandmother rolls in grave, yet again.)
[ Post Reply | Private Reply | To 1 | View Replies]
To: an italian
Ms Fallaci argues that Europe is turning into "an Islamic province, an Islamic colony" and that "to believe that a good Islam and a bad Islam exist goes against all reason".

I, too, would be honored to call her my sister. A voice of reason in a world gone mad.

I not only plan to buy her new book, The Force of Reason, but would like to do more. It would be great if there was a world-wide group which would stand behind her with financial as well as moral aid, something along the line of "Friends of Oriana". I would feel honored to contribute to her defense monthly for as long as it takes.

If any human being is in a position to define and respond to the leprosy on humanity called islam, this woman is. Her lifetime politics is antithecal to mine, but honesty and consistency, as well as integrity define this woman, and her systematic growth against all forms of tyranny and against the degradation of the human spirit in any form is worth defending.

"The Rage and the Pride" was excellent. Ms. Fallaci writes with such intensity that you can't help but feel her anger and outrage as you're reading.

In Italy we are trying to make her Senator. I'd love to see her in politics: she has the same ideas of mine, she's strong and above all whatever she does she does with passion.

She's a great woman, a great Italian fellow. I'm honored and proud to stand up at his same side.

The sad part is that in Europe and Canada, this woman is seen as a dinosaur from another century. The combination of islamic aggressive public relations and the acquiesence to Europeans to the role of guilty oppressors is the perfect political storm to let the muslims prpogate their lifestyle to the point of over-running what was once the heart of Christiandom. Europe has given up.

Improper use of the truth and pointing out the obvious?
Abusing the rights of the largest current criminal enterprise on the planet operating under the guise of a religion?
Using excessive intellectual force against pure evil?

Animal abuse?
The possibilities are endless...

Ping for a "Best Author of the Century" award

Claudia, you took the words out of my mouth. She is, imo, the world's greatest journalist. Have you ever read "Interview with History?" That should be required reading at every college campus anywhere. Like Christopher Hitchens, agree or disagree, she's the real thing. She walks the walk.

The same could happen here in the U.S.

Look at what Democrat John Conyers of Detroit has proposed:

"Here is the text of the resolution proposed to Congress by US Representative John Conyers, Jr., a Detroit Democrat, taking a first tentative step toward a blasphemy law in the United States: Text of My Resolution Regarding Relgious [sic] Intolerance. (Expressing the sense of the House of Representatives condemning bigotry and religious intolerance, and recognizing that holy books of every religion should be treated with dignity and respect."

"Whereas believers of all religions, including the Abrahamic faiths of Christianity, Judaism and Islam, should be treated with respect and dignity;

Whereas the word Islam comes from the Arabic root word meaning “peace” and “submission”;

1 Resolved, That the House of Representatives–

(1) condemns bigotry, acts of violence, and intolerance against any religious group, including our friends, neighbors, and citizens of the Islamic faith;

(2) declares that the civil rights and civil liberties of all individuals, including those of the Islamic faith, should be protected;

(3) recognizes that the Quran, the holy book of Islam, as any other holy book of any religion, should be treated with dignity and respect; and

(4) calls upon local, State, and Federal authorities to work to prevent bias-motivated crimes and acts against all individuals, including those of the Islamic faith.

Well, yes.
It's as silly as the Mafia suing for defamation... ... multiplied a million times.

Ariana needs some expert help compiling the crimes of islam in just the last 50 years.

The list of atrocities this criminal group has perpetrated would take months simply to read in court. The maggots have made a huge mistake.

14 posted on 05/25/2005 5:45:00 AM PDT by Publius6961 (The most abundant things in the universe are hydrogen, ignorance and stupidity.)
[ Post Reply | Private Reply | To 10 | View Replies]
To: milford421
This classic clown seems to never have had a firm grasp on anything logical and intellectual. Specifically, in this instance, the concept of "separation of church and state".

If blasphemy and desecration become a federal crime, I plan to become a habitual criminal.

19 posted on 05/25/2005 6:05:04 AM PDT by Ros42
[ Post Reply | Private Reply | To 1 | View Replies]
To: an italian
All of us at some point have said or written something that was offensive to Wahabi Islam...myself daily. That's just too bad. Each day I read new outrages perpetrated by an evil, medieval society against all human dignity, and each day the Muslims feign outrage against...us. They burn our flags, behead our citizens, shred our holy books and desecrate our holy places.

It's about time writers come out publicly and decry this brutal sham of a religion, and I don't care if they are offended. I am offended.