Police: Alleged Gay-Bashing At Marin High School A Hoax Perpetrator 'Confessed To Everything'

May 8 (AP) — A 17-year-old top wrestler at an area high school here faked a series of gay-bashing incidents that prompted a police investigation, authorities said.

The rash of gay-bashing incidents at Tamalpais High School was the work of a student gay leader who claimed she was the victim of hate crimes, according to Mill Valley Police Capt. James Wickham.

The teen, who heads the school's Gay-Straight Alliance, admitted to authorities that she was the perpetrator of the incidents, which included vandalizing her own car with derogatory graffiti, police said.

"It has been determined that all the incidents have been committed by a single individual," Wickham said.

The student was not identified by police.

The girl has been suspended and could face expulsion, said Bob Ferguson, district school superintendent.

"She confessed to everything," Ferguson said. "She did admit to police that it was basically for attention."

The student was not arrested, but police said the case would be referred to the Marin County District Attorney's Office for review.

In a series of incidents dating back to November, the student claimed she was the target of hateful language, with anti-gay epithets scrawled on her car and on her school locker. She told police she was pelted with eggs outside her home by an unknown assailant.

Tam High students "kept wondering how this could happen at their school, but unfortunately they were let down by one of their classmates," Ferguson said.

Ferguson added that girl's recent title as the high school's athlete of the year was withdrawn by the district late last week.

High school principal Chris Holleran said students will have the opportunity to receive counseling about the matter.

Paula Pilecki, executive director of San Anselmo's Spectrum, a lesbian, gay, bisexual and transgender advocacy group, said she was surprised that police released a statement about the girl's admission.

"The next few weeks will no doubt be difficult for everyone involved, and I hope the community reacts with compassion," she said. Public information. San Anselmo's Spectrum: 1000 Sir Francis Drake Boulevard, No. 10 San Anselmo, CA 94960

TOPICS: Extended News; News/Current Events; US: California
KEYWORDS: fakehatecrime; fakehatecrimes; gay; gaybashing; glsen; gsa; hatecrimehoax; highschool; hoax; homosexualagenda; tamalpais Navigation: use the links below to view more comments.
first 1-20, 21-40, 41-42 next last
Watch now that they know the perpetrator is the victim. The lesbos are already asking for tolerance. UH? Classes and cost are up to fight “Gay Hate.” And ask for tolerance and compasssssion. SICKENING. Marxism is raising its ugly head. Socialist Gender-ocarcy. Also I am not Homo-phobic, I am homo-disgusted.
1 posted on 05/09/2005 12:58:21 PM PDT by Exton1
[ Post Reply | Private Reply | View Replies]
To: Exton1

This BETTER be prosecuted as a hate crime.

But I'll take comfort in the fact that they erode their credibility a little when this happens. Just like the race-baiters.

Future governor of the state for the Rat party.....

As always, remember that to the liberals, anything that furthers there pet little projects to demonize traditional norms are good and worthy of tolerance and compassion. When it is something/someone they like, the ends justify the means.


It is only conservatives who have to play by the rules all the time, and walk on proverbial eggshells while doing so.


Also, i've always been confused when labled a homophobe. After all, I'm not scared of them, I just think they're sinners.

This brave girl is to be applauded for raising awareness of the cruelties faced every day, by those oppressed womyn living alternative lifestyles worldwide. The personal sacrifice of this young role model should be celebrated, not judged (sarcasm).

I hope the community reacts not with "compassion", but with outrage.

If the type of gay bashing this young lady did is considered a hate crime then she should be charged with a hate crime just as anyone else would have been IMHO.

Why? Because she tried to make it look like someone else was guilty of the crime that she infact did.

Gee whiz Regulator, my lunch hasn't even settled yet.

And liberals love to be victims-both imagined and manufactured.

The irony is as thick as Hillary's ankles.

How was it a hoax?

This woman should be prosecuted with the same zeal that was intended for her mythical accuser.

what is wrong with people today

idiots like this mean when someone is really a victim of a hate crime, no one is going to believet them

It seems like 9 times out of 10, these so-called crimes against gays are staged.

Oh crap! I HATE it when they get my hopes up.

16 posted on 05/09/2005 1:16:06 PM PDT by JoeV1 (Democrat Party-The unlawful and corrupt leading the blind and uneducated)
[ Post Reply | Private Reply | To 1 | View Replies]
To: RegulatorCountry
This brave girl is to be applauded for raising awareness of the cruelties faced every day, by those oppressed womyn living alternative lifestyles worldwide. The personal sacrifice of this young role model should be celebrated, not judged (sarcasm).

This is a great example of 'false but accurate' methodology to advance liberalism. 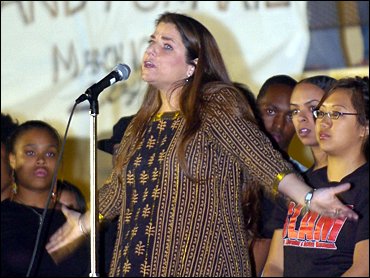 "Kerri Dunn speaks in support of her hoaxing sister"

19 posted on 05/09/2005 1:19:51 PM PDT by frogjerk
[ Post Reply | Private Reply | To 1 | View Replies]
To: Exton1
High school principal Chris Holleran said students will have the opportunity to receive counseling about the matter.