President Bush, who has pledged to reform the U.S. tax code in his second term, today praised the flat tax implemented by Prime Minister Mikulas Dzurinda of the Slovak Republic. During their meeting in Bratislava, Bush, without prompting, made a point of touting the flat tax:

“I complimented the Prime Minister on putting policies in place that have helped this economy grow. The most important responsibility we have at home is to make sure our people can find work. And the president put a flat tax in place; he simplified his tax code, which has helped to attract capital and create economic vitality and growth. I really congratulate you and your government for making wise decisions.”

Oh, the Artist Formerly....no...Prince must be so proud! First Purple Rain, now this!

Well, his band was called the Revolution, at least back when Purple Rain was released.

She wore a raspberry burka, the kind you find in a second-hand bizaar.... 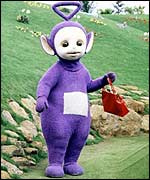 You know the liberal pillow biters are going to be trying to co op this phrase by the end of the day.

You know the liberal pillow biters are going to be trying to co opt this phrase by the end of the day.

If I may be so bold, our President has, during this trip to Europe, conducted himself in a manner which is truly GREAT. And I mean that in capital letters.

He is following no strict ideological lines, but rather listening. He is also saying that which is universally true and with which only those who hate freedom and liberty can argue.

The man has really come into his own. Although I was not a big fan in term one, he is doing a great job in the first months of term 2 and clearly along the path to be not just a revolutionary President, but also a great man in the history of humanity.

11 posted on 02/24/2005 11:27:18 AM PST by Einigkeit_Recht_Freiheit (If nothing will change your mind, yes you are an extremist.)
[ Post Reply | Private Reply | To 1 | View Replies]
To: West Coast Conservative
Now I suspect that someone, somewhere will march up and say that the term or the color itself is offensive because of some long-entrenched culture or belief. The left and the MSM will be all over it and suggest that GWB should have known that a .... 'pygmy tribe in the outback of Australia finds "purple revolution" offensive'.

I like it when he terms new phrases and words. The elites are forced to acknowledge them eventually in English dictionary's, or in this case Encyclopedia's.

In the military realm, purple refers to a "Joint" operating environment.

Calling all creative FReepers (and lurkers)!
The L.A. Chapter needs YOUR advice.

As many of you know by know, the Hollywood Resistance Force
(also known as the L.A. Chapter of the Free Republic Network)
is planning a "Rally For Responsibility" outside this year's Academy Awards.

FReeper rantblogger has suggested that we bring GIANT foam hands to the rally,
with the index finger painted PURPLE...

...to show OUR solidarity with the brave Iraqi voters,
and to remind the leftists in Hollywood that if they had THEIR way,
Iraq would not now be free.

image from the thread "Giving terrorism the finger!"

We have now secured ONE HUNDRED (100) white foam mitts like THIS one, from www.spiritindustries.net:

This Thursday night, we will be having a "sign painting" [and "FINGER painting"] party, where we will be painting the index fingers of those foam mitts PURPLE.

This is where YOU come in. :o)

What do YOU think?

What is the best MESSAGE for us to send to Hollywood?
(And to the BILLIONS who may be watching at home on TV.)

I think they're the NPG (new power generation) now, but
I haven't really paid much attention to the androgenous
little freak lately.