Well, I’ve said it before and I’ve said it again: As the political left finds itself continually shut out of the halls of power, where they feel they are undeservedly entitled to walk, they continue to become more and more rabid and unthinking in their violent behaviors. Anger makes you stupid, and stupidity breeds mistakes.

Case in point: Once again, a local Republican couple find their SUV vandalized by Kerry brownshirts who, foolishly, left a “Kerry/Edwards” bumper sticker on a side window exposed when the Katherine Harris sign that was there was ripped off and left on the ground. Talk about leaving your DNA on the victim. It says something about a candidate when his supporters are little more than thugs, vandals and theives, doesn't it?

This is the second time this has happened – the first being the evening after our very successful “W is for Women” rally in Venice last Tuesday. The Sarasota Sheriff deputy to came by to take the crime report dusted for prints and took a couple bits of wreckage with him for evidence. The lady who owns the SUV thought that the American flag on the driver’s side would deter the vandals. So much for that idea.

So, as we Republicans continue to focus on our positive, optimistic message, the lefties become more and more negative. As usual, since they have no truly viable candidates and have no real ideas of their own, they simply attempt to attack those people who do. Of course, it goes without saying that vandalizing unguarded vehicles is pretty cowardly, to say the least. If that’s the best they can do, Kerry’s supporters are indeed a very sorry lot. 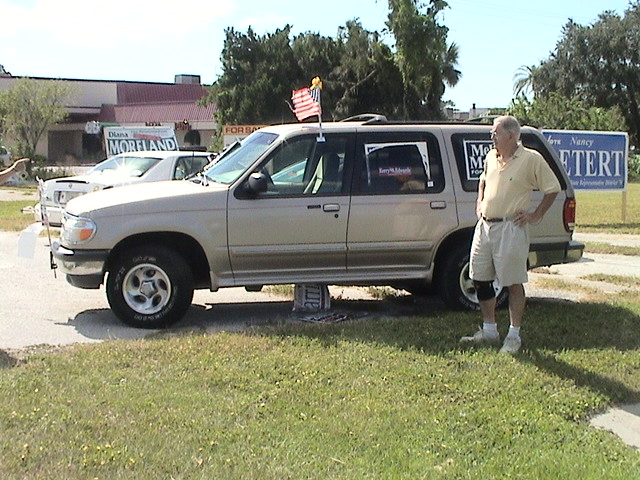 We arrive at the scene of the crime. 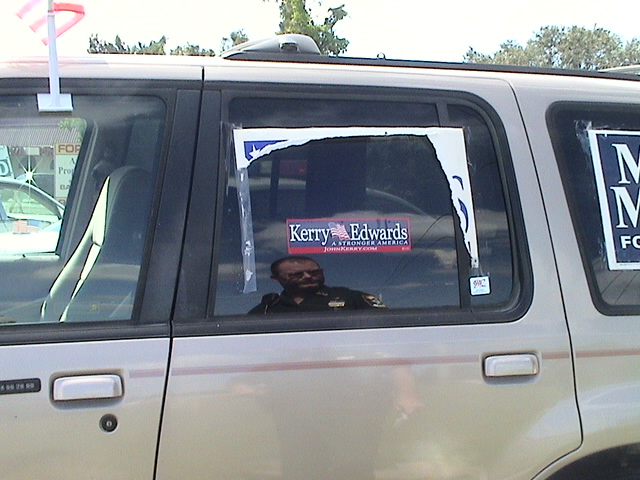 Sarasota county sheriff's face reflected in the passenger window where the vandals left their calling card after ripping the Katherine Harris sign down. What brave "freedom-fighters" they are, eh? 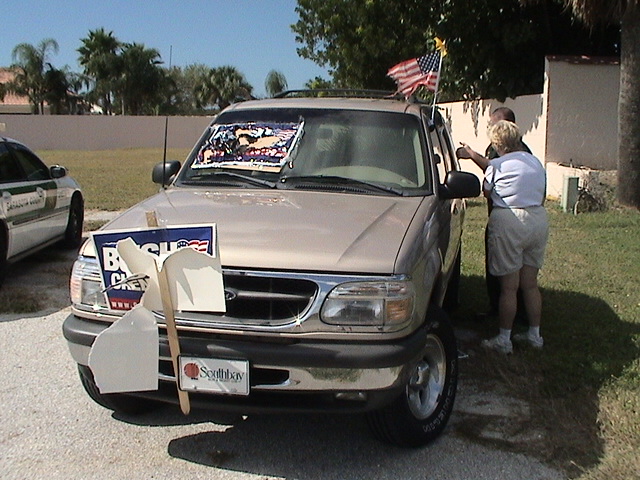 Front view of the damage. 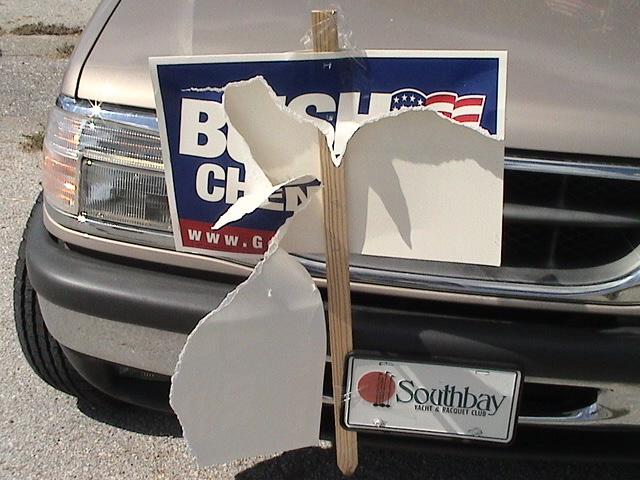 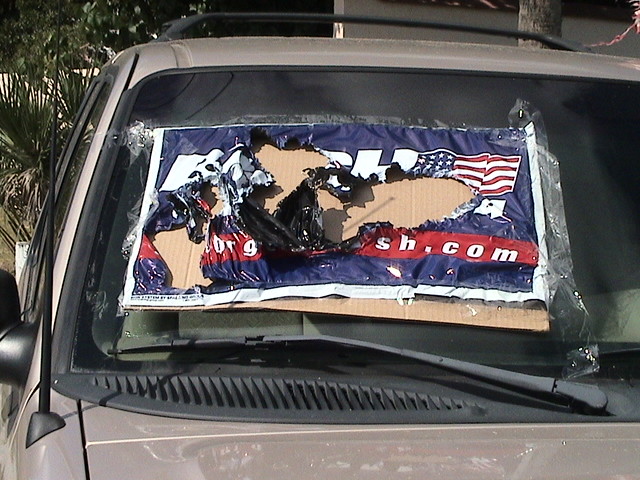 Close-up of the shredded Bush/Cheney sign on the windshield. 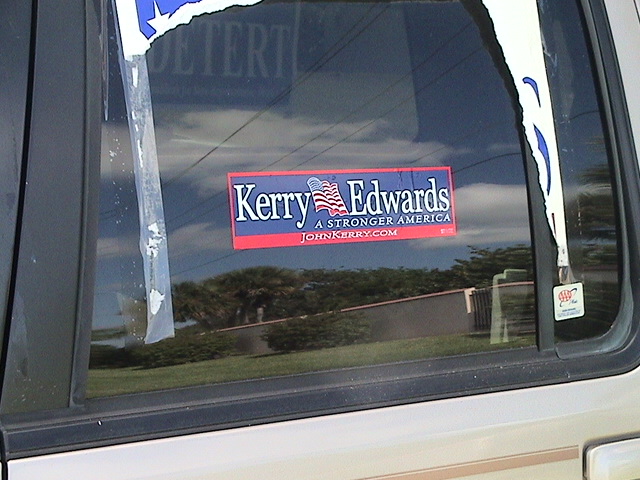 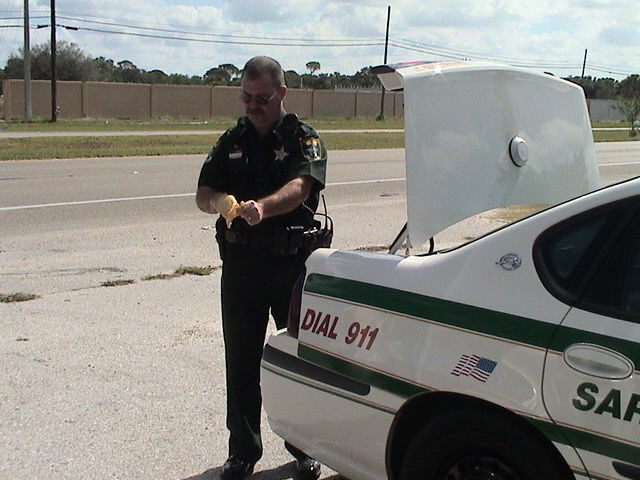 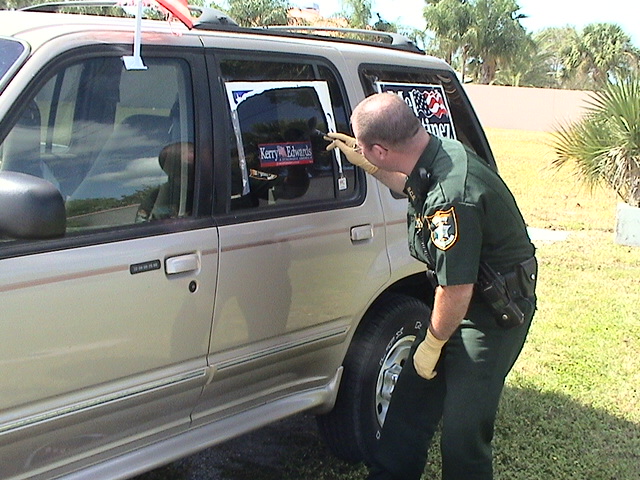 Dusting for prints. From what the officer took with him, it appeared he had some evidence worthy of further study. I'd love to see these rats caught and get the book thrown at them.
TOPICS: Activism/Chapters; Crime/Corruption; Culture/Society; Government; News/Current Events; Politics/Elections; US: Florida
KEYWORDS: brownshirts; election; florida; leftisthate; politicalterror; rats; sarasota; thugs; vandals Navigation: use the links below to view more comments.
first 1-20, 21-28 next last
1 posted on 10/31/2004 9:51:47 AM PST by Joe Brower
[ Post Reply | Private Reply | View Replies]
To: JulieRNR21; kinganamort; katherineisgreat; floriduh voter; summer; Goldwater Girl; windchime; ...
Florida Freeper

I'm compiling a list of FReepers in Florida for use in the upcoming elections.
If you want to be added, please FReepMail me.

What a bunch of idiots! These people are insane!

Let's stop calling them Kerry brownshirts, and call them what they are; Kerry Gestapo...

Joe, it is so strange. I saw that vehicle with the signs on it (before they were vandalized) on Friday parked on 41. I thought to myself, now if you were going to vandalize someone, that would be a target. Guess the
rats were thinking the same thing.
Jim

Thank heaven you found a LEO who was willing to actually treat this as a crime!

Thanks for photographing this and keeping a record. I've been battling the sign thieves constantly this weekend. I left a nice surprise for one yesterday - a plastic bag full of paint taped to the inside of my sign. It was stolen two nights ago and shortly thereafter dispensed its contents into a leftist's volvo diversity wagon.

10 posted on 10/31/2004 10:09:33 AM PST by sheikdetailfeather
[ Post Reply | Private Reply | To 6 | View Replies]
To: Joe Brower
I Hope they get theses Bastards and bust them big. I just moved from Sarasota to Bradenton and have been expecting the same things to occur here.

This really pisses me off that these Brownshirts think they can get away with it and if these is a sKerry win (GOD FORBID) these @$$holes will be more emboldened and will go after any one and and signs that don't represent there Socialist Beliefs. I think there is a real fight coming in this country, if this keeps up, a third civil war that will resemble the 1st one more than the second (1960's).

"Thank heaven you found a LEO who was willing to actually treat this as a crime!"

As a wife of a LEO, I find that remark insulting!

14 posted on 10/31/2004 10:31:44 AM PST by Proud Legions
[ Post Reply | Private Reply | To 8 | View Replies]
To: Arpege92
Then you choose to be insulted. We have been sign waving on bridges and several (democrat) LEO's have tried to shut us down illegally. We had to get letters from the DOT to stop them. Or do you think that LEOs are all a super race, above us all, each and every one a conserative, white as the driven snow perfect being? That you could take issue with such a simple and supportive statement, then go on the attack is what is truly insulting. I am pro-police, but am not blinded to pretend they should be accorded a utopian King-like status. Many years ago I personally had drug dealers across the street who I found were protected by a few bad officers. Or are you so naive as to think it never happens? Your arrogant attitude is ridiculous and insulting. You do more with your bad attitude to hurt officers than any who know there are good ones and bad ones - just like every other group on earth. Get a brain check.
15 posted on 10/31/2004 10:56:46 AM PST by Libertina (Please Lord, grant America a leader who loves you.)
[ Post Reply | Private Reply | To 13 | View Replies]
To: Proud Legions; GOPcapitalist

...and if you don't have paint handy, well - we all gotta pee every few hours.

Lots of Bush supporters on Bee Ridge now. Any fellow citizens in Sarasota should come down and show your support.

Considering it was a liberal who did this, the suspects prints are probably on file from their last criminal conviction.

I'm sure some freepers are in Tampa at the President's Rally. I saw it on tv. I'll be watching the Swiftboat Airing today on Pax. Fv