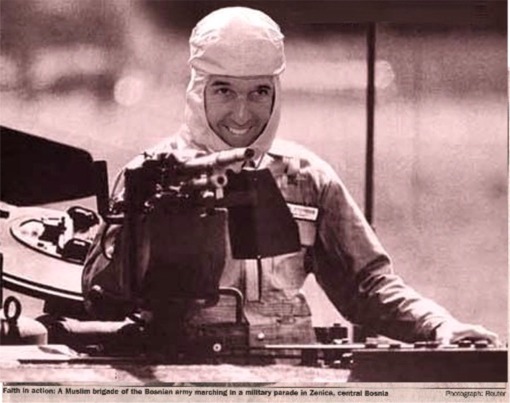 Thanks to the sink emperor!!!!

Brought to you courtesy of Bill Clinton, the terrorists friend.

And the blood of thousands of innocent Serb Christians is on Bill's hands as well.

Going to Kosovo was a mistake in 1999. The Bosnian Muslims were the Waffen-SS formed by their friend Heinrich Himmler.

Since when we've had troops on the ground, and haven't had any problems with the Bosnians.

So what's your point?

7 posted on 09/19/2004 11:14:08 PM PDT by Hoplite
[ Post Reply | Private Reply | To 1 | View Replies]
To: Ptarmigan
And Serbia was the first "Judenfrei" country thanks, as reported by the local Gruppenführer, Harald Turner, to the enthusiastic support of the locals.

Occupying forces were always able to rely on the Belgrade police. Special Police forces dealt with their assignments with great enthusiasm and success, unlike any other police in any city in all of occupied Europe.

So if we're using World War II to justify our actions in the 1990's, we've got our bases covered, don't we.

would it surprise you to know that Clinton's Bosnian Buddies even gave OBL honorary citizenship ( and a passport ?)

would it surprise you to know that one of the key 9-11 plotters was a Bosnian ?

would it surprise you to know that many Taliben captured in Afghanistan recieved their first training in Bosnia courtesy of money and arms sent there by x42 ?

9 posted on 09/20/2004 7:26:36 AM PDT by vooch
[ Post Reply | Private Reply | To 1 | View Replies]
To: Hoplite
still using those discredited half-truths to bolster your (crumbling) case for supporting Bosnian Jihadists ?

Hoplite - your arguments have lone since been exposed as utter fabrications.

I read somewhere that some of the 9/11 hijackers spent time in Bosnia and even got papers from them. I know the Nazis wanted to form a Muslim empire in that area.

How the heck can they be "Jew" free? On the first flat/floor of my friends apartment, there is a Serbian-Jewish Friendship Committee office that has been there for well, well over twenty years.

Serbia was the first to rise up against the Germans in all of Europe. They were the quickest to form anti-Axis forces and were the most effective til Tito usurped the intel in London to have support switched from the Serbs to his communist heathens.

In the name of Allah, Muslim terrorists in Russia stabbed babies to death, shot toddlers in the back, forced children to eat rose petals and drink their own urine, raped teenage girls, executed their teachers and blew themselves up in a crowded school gymnasium. Death toll: 338.

13 posted on 09/21/2004 7:29:30 AM PDT by JesseHousman (Execute Mumia Abu-Jamal)
[ Post Reply | Private Reply | To 1 | View Replies]
To: ma bell; Hoplite; vooch
Hoplite, I am disapointed. You have not used fake Anti-Jewish stamp example. Anyway, nice try, the only probelme is that Croatian Nazi propaganda is debunked long time ago. But you hope that if you repeat it thousand times it will become the truth.

First Junenfrei town in the balkans (and Europe) was Sarajevo, not Belgrade.

Sarajevo at that time was in Nazi puppet statelet called Independent State of Croatia, run by Croatian Nazis.

Unlike Bosnia and Croatia (a.k.a Independent State of Croatia), WWII Serbia was under direct Wehrmacht military occupation. An attempt to blame extermination of Jews on Serbs is an act of Holocaust revisionism, because it tries to exonerate Nazism and Nazis, the real perpetrators of extermination and pin it on Serbs as a people.

It will be better for your mental health to read Holocaust encyclopaedia than Croatian Nazi drivel. Denial is not a river in Egypt.

Yeah - he thinks if he throws enough mud some of it will stick. Little does he know all he is doing is discrediting himself with parroting Clintonista tales

Did all the locals support him? No. But the same is true of any of the Balkan countries - each and every country in the region rose up against Axis rule, from the Albanians to the Croatians, yet you and your Serb nationalist friends continue to spam these threads with your garbage attempting to tie World War II crimes to the 1990's, as if the connection would somehow lessen or abnegate Serbian actions under Milosevic.

Plainly put, you're in no position to cast stones, DTA, and I'm more than happy to sling 'em right back in your face.

16 posted on 09/21/2004 10:54:37 AM PDT by Hoplite
[ Post Reply | Private Reply | To 14 | View Replies]
To: DTA
What must be taken into account is the quick defiance and set-up of the revolt against occupation compared to other countries that were rudely invaded.

This revolt done was supported by the Masonic people of that region and not by Orthodox Serbs. Thereby, hoppies arguement is spittle, a fungus.

There is too much proof of history showcasing how write I am and how wrong Hoplite is.

Problem is, many people are too lazy to search the facts themselves so reliance on their ignorance is the preferred task.

>>>The Bosnian Muslims and the Albanians joined the Croatians in welcoming the Nazis and rose up against the Serbian civilian population.

Oh, and don't forget the Hungarians too.
http://www.freerepublic.com/focus/f-news/1217680/posts

After all, if the Croat state wishes to be strong, a nationally intolerant policy must be pursued for fifty years, because too much tolerance on such issues can only do harm."

Adolf Hitler to Ante Pavelic in their meeting, June 6, 1941

"For the rest - Serbs, Jews and Gypsies - we have three million bullets. We shall kill one third of all Serbs. We shall deport another third, and the rest of them will be forced to become Roman Catholic." Mile Budak, Minister of Education of Croatia, July 22, 1941

"There are limits even to love... (It is) stupid and unworthy of Christ's disciples to think that the struggle against evil could be waged in a noble way and with gloves on."

"Croats no longer think that German troops are present merely to provide peace and security, but that they are here to support the Ustasha regime [...] The Ustashas promote the impression that they act not only in agreement with German instances, but actually on their orders. [...] There is here today a deep mistrust of Germany, because it is supporting a regime that has no moral or political right to exist, which is regarded as the greatest calamity that could have happened to the Croat people. That regime is based entirely on the recognition by the Axis powers, it has no popular roots, and depends on the bayonets of robbers who do more evil in a day than the Serbian regime had done in twenty years."

"Our troops have to be mute witnesses of such events; it does not reflect well on their otherwise high reputation... I am frequently told that German occupation troops would finally have to intervene against Ustasha crimes. This may happen eventually. Right now, with the available forces, I could not ask for such action Ad hoc intervention in individual cases could make the German Army look responsible for countless crimes which it could not prevent in the past."

"The horrors that the Ustashi have committed over the Serbian small girls is beyond all words. There are hundreds of photographs confirming these deeds because those of them who have survived the torture: bayonet stabs, pulling of tongues and teeth, nails and breast tips - all this after they were raped. Survivors were taken in by our officers and transported to Italian hospitals where these documents and facts were gathered."

Commander of the Italian Sassari Division in Croatia, 1941

"Increased activity of the bands is chiefly due to atrocities carried out by Ustasha units in Croatia against the Orthodox population. The Ustashas committed their deeds in a bestial manner not only against males of conscript age, but especially against helpless old people, women and children. The number of the Orthodox that the Croats have massacred and sadistically tortured to death is about three hundred thousand."

"From the founding [of the NDH] until now the persecution of Serbs has not stopped, and even cautious estimates indicate that at least several hundred thousand people have been killed. The irresponsible elements have committed such atrocities that could be expected only from a rabid Bolshevik horde."

""Pictured here are policemen and soldiers standing around the bodies of murdered Jews in Novi-Sad, Yugoslavia on January 23, 1942. On April 12, 1941, Hungarian forces entered Novi-Sad and immediately began terrorizing the Jewish residents. Between the 21-23 of January 1942, Jews were taken from their homes, in the freezing cold, and murdered. Most were drowned in the Danube River. Over 800 Jews died in the massacre and other Jews fled to Budapest. The Germans entered Novi-Sad in March 1944 and the remaining Jews were sent to Auschwitz.

Perhaps joking about Nazi past is fun for you, but this is Nazi revisionism for me.