Time to turn up the heat on Kerry's anti war protests!
68-69TonkinGulfYachtClub

It's time to turn up the heat on Kerry and his anti war protests.
Him and his vile suppoters, then and now, need to be called on what they really stand for.
The media still won't cover this aspect.
We need to tell his story here, and everywhere.

I'm sick of the media ONLY talking about the Swift Boat Vets.

Let's see how they cover the mockery in NYC today about our fallen in this war.
The mock coffins were out of line!
Now that they crossed the line it's time to take off the gloves, once and for all.

"Although Kerry campaign officials insist that they have published
Kerry's full military records on their Web site
(with the exception of medical records shown briefly to reporters earlier this year),
they have not permitted independent access to his original Navy records.
A Freedom of Information Act request by The Post for Kerry's records produced six pages of information.
A spokesman for the Navy Personnel Command, Mike McClellan,
said he was not authorized to release the full file,
which consists of at least a hundred pages. "

"I spent more time on John Kerry's boat than any other crewmember.

John Kerry hasn't been honest - he has been deceitful.

John Kerry claims that he spent Christmas, in 1968, in Cambodia.

And that is catagorically a lie. Not in December. Not in January.

We were never in Cambodia on a secret mission. Ever."

NOTE :
Ramsey Clark is pictured below with Kerry and
Vietnam phony vet Al Hubbard
Who was head of the
Vietnam Veterans Against the War movement.

Al Hubbard Sgt., 22 Troop Carrier Squadron Aug. ’65-June ’66
- Al Hubbard, proven fraud who never set foot in Viet Nam.
The only Vietnamese he ever met was
when he was collaborating with the North Vietnamese in Paris
on the American Communist Party's nickel.

John Kerry's explanation:
"He (Hubbard) simply exaggarated his particular position.
But nobody knew it at the time. And those things happen."

NEW:
FReeper smith288 has an online version of
Kerry's "The New Soldier"
You can read it without downloading pdf files!
CLICK HERE

Kerry hopes everyone
in the USA gets this book!

NEW:
“Without question,
we were held captive longer
because of the anti-war people,
the Kerrys, the Fondas and Haydens,
the names we knew over there -
they encouraged the enemy to hang on.”
Excerpt from “Stolen Honor” website
- Leo Thorsness
Former Vietnam POW
CLICK HERE

Jane Fonda tells the student audience at the Michigan State University in 1969;
"I would think that if you understood what communism was, you would hope,
you would pray on your knees, that we would someday become communist."

Copy and paste the links to everyone you know.

Send this url for the Steve Gardner video

Send this url for the online version

Print this out (46 pages) and disribute it,
especially to the liberals you know.

The anti war legacy is in full bloom today in NYC.

Thanks again to the anti war protesters of the 60's

The Kerry's and Fonda's of the world are in force today.

While I fully support the 1st amendment

I wonder why there is such an effort to shut Vietnam Vets who speak against Kerry.

Even certain FReepers want "the Vietnam issue" dropped
because they fear a backlash to President Bush.

Well I AM going to exercise MY 1st amendment right.

I'm NOT going to be silent.

And come Nov 2nd I for one, along with MANY,MANY others, will be able to say

"I honestly did what I could do to once again defend my country."

The likes of the Kerry's and Fonda's of the anti war "movement" changed the course of my own life.

They ARE NOT going to treat the troops of today,
like they did myself and countless others in the past!

The left wing protesting fools in NY will be a strong reminder of Kerry's betrayal of his country in 1971.

Concur... Get the word out... Kerry is already trying to turn the Global War on Terror into another vietnam... We can not let that happen.

If we are lucky, the liberal media will do half the work for us, believe it or not. We can hope that in their zeal they cover the NYC protesters around the clock. That will remind the nation that John Kerry was and still is one of the wackos in the street.

If you are a servicemember stationed in CONUS or overseas, you can register to vote absentee.

The UOCAVA (Uniformed and Overseas Citizens Absentee Voting Act)
requires that the states and territories allow certain U.S. citizens, as defined below,
to register and vote absentee in elections for Federal office.
These groups include:

Eligible family members of the above

IMPORTANT DATA
Military Voting for 2004
YOUR VOTE will count!

Originally posted by MoJo2001 and The Sailor

The media will take their marching orders from Terry Mcalwful and blame it on the VRWC.

Kerry was a supporter of the "People's Peace Treaty," a supposed "people's" declaration to end the war, reportedly drawn up in communist East Germany.

It included nine points, all of which were taken from Viet Cong peace proposals at the Paris peace talks as conditions for ending the war.

One of the provisions stated: "The Vietnamese pledge that as soon as the U.S. government publicly sets a date for total withdrawal [from Vietnam], they will enter discussion to secure the release of all American prisoners, including pilots captured while bombing North Vietnam."

In other words, Kerry and his VVAW advocated the communist line to withdraw all U.S. troops from Vietnam first and then negotiate with Hanoi over the release of prisoners. Had the nine points of the "People's Peace Treaty" favored by Kerry been accepted by American negotiators, the United States would have totally lost all leverage to get the communists to release any POWs captured during the war years.

Vice President Spiro T. Agnew said that Kerry, "who drew rave notices in the media for his eloquent testimony before Congress," was using material ghosted for him by a former Kennedy speech writer (Adam Walinsky).

Of which I am a PROUD member! 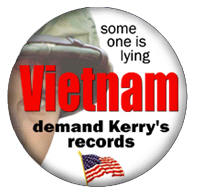 The idiots are trying to Vietnamize the WOT. It just won't sell. They will do far more harm to Kerry than good.

Even Dan Rather knows Kerry is in trouble

I'd like to recommend (via Drudge) Dan Rather's Convention Journal:

I know what we all think of old Dan's biases but this is an interesting, objective, insider's report of what he is seeing at the convention.

Here are a couple of observations he makes based upon taking to both Dem & Rep insiders:

"The consensus is that Bush-Cheney leads nationally now by about 3 points..."

"He (a 'very high Kerry advisor' acknowledged that Kerry has “slipped a bit in our polling” in Ohio the past few weeks..."

"the Kerry man said, “our numbers have been slipping there" (Missouri)

Re Florida, "...fair to say the Bush people sound a little more confident about it than Kerry’s team."

18 posted on 08/29/2004 2:17:00 PM PDT by Ranker
[ Post Reply | Private Reply | To 13 | View Replies]
To: 68-69TonkinGulfYachtClub
The likes of the Kerry's and Fonda's of the anti war "movement" changed the course of my own life.
They ARE NOT going to treat the troops of today, like they did myself and countless others in the past!
THIS I VOW

Grrrrr. They make me mad as hell too, and I didn't serve in the armed forces. But I did, and will fight subversion of this Republic with all my abilities.

"...One time Kerry was ordered to destroy a Viet Cong village
but disobeyed orders and suggested that the Navy Command
simply send in a Psychological Warfare team to be
friend the villagers with food, hospital supplies,
and better educational facilities."