EDWARD KENNEDY, a man whose ideological and partisan frenzies have apparently obscured his vision, looks at George W. Bush and sees Richard M. Nixon. Perhaps Bush should be grateful. At least Kennedy has not compared the President to a member of the Senate who once skedaddled from the scene of a drowning, forgetting to inform officials about it until 12 hours later.

Is it fair to bring up Chappaquiddick 35 years after Mary Jo Kopechne’s death? Only for this reason: to search out the moral authority of this mouthy man who has repeatedly seen fit to accuse President Bush of grotesquely immoral behavior.

Kennedy has said, for instance, that Bush misled the American people into a war that has resulted in more than 600 American deaths. This week, in a speech at the Brookings Institution, he went even further. The war, he suggested without precisely saying so, was meant to divert public attention from “deceptions here at home,” such as a lie about when the recession started. He said Bush had created “the largest credibility gap since Richard Nixon.” And, news accounts inform us, he referred to Iraq as “George Bush’s Vietnam.”

What we have here is not simply a point of view on issues. It is vile, below-the-belt name-calling, a far remove, say, from the public pronouncements of someone like Sen. Richard Lugar, R-Ind., who spells out policy disagreements in careful arguments. To propose as Kennedy does that the war in Iraq was politically motivated is tantamount to saying Bush has sacrificed lives for his own selfish ends — that the President is murderously Machiavellian.

If you are going to go that far, the least you could do is back up the charges with evidence and analysis. Kennedy gives us hokum and hysteria. For starters, he should figure out that there was no political advantage in a war that would delay economic recovery, run federal spending sky-high and lead to American casualties.

As for Bush misleading the nation about Iraq’s possession of weapons of mass destruction, as Kennedy has alleged, Kennedy himself had worried aloud about such weapons, as had Kennedy’s Massachusetts pal, John Kerry, now running for President. Kennedy is one of those who has also said that Bush warned that the threat from Saddam Hussein was imminent. Beyond any reasonable doubt, Bush did no such thing.

As for Iraq being another Vietnam, Kennedy might pause to reflect that it was his brother John who stepped up our involvement in that Southeast Asian country so as to make extraction difficult, and that it was JFK’s advisers who convinced LBJ that the U.S. stakes there were vital. Despite the fighting now going on in Iraq, it seems close to hallucinatory to suppose we will lose a fraction of the 58,000 American soldiers lost in Vietnam. These two wars are as different as desert and jungle.

The phrase “credibility gap” did not first come into prominence with Nixon, but with LBJ. Skip that for a moment and focus on Kennedy’s own credibility gap when he talks of the recession as if it were somehow Bush’s fault. In fact, the economic slowdown began in the Clinton years, and there is no Bush policy that can be blamed for instigating the recession that officially started in his administration. The Bush domestic policies Kennedy most detests — what he calls tax cuts for the wealthy — have helped spur record economic growth that finally appears to be translating into vast job creation as well.

In bringing up Nixon’s name, Kennedy brings up memories of Watergate, of illegal conduct and disgrace, linking those memories to an understanding of who Bush is. It’s a neat trick if the public does not also think back on Kennedy’s own conduct when he walked away from an underwater car and a passenger who did not walk away.

Kennedy, to his credit, has given himself wholeheartedly to public service since then. While I think his liberal ideology inimical in some respects to American vitality and freedom, I also think he represents liberalism well and that liberal views should be part of the mix in Congress. His attacks on Bush go beyond the bounds. The making of them is itself a character lapse.

Jay Ambrose is director of editorial policy for Scripps Howard Newspapers and can be reached at AmbroseJ@shns.com.

So do I. As a liar, drunk, killing, immoral man, he is the perfect representative of liberalism.

Oh, that's interesting, and here I was thinking he was all this time in office for money and power(!) 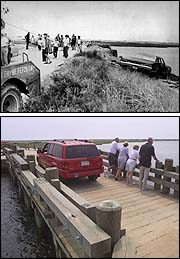 Rebuilt bridge. In 1969, aide Mary Jo Kopechne died when Edward Kennedy drove his car off a bridge on Chappaquiddick Island in Massachusetts

Admiral Kennedy's Olds being surfaced while his presidential chances will forever remain on the bottom. Apparently the location has become a tourist trap (lower photo)

How do you know when Ted Kennedy is lying?

Ted Kennedy is the red-nosed boozer who left a young woman, more likely than not one of his many mistresses, to drown in a car he managed to drive off a bridge into six feet of water. Instead of diving in to try to save her, this land-bound blowfish wandered around for half the night plotting and scheming ways to protect his political career from the scandal that was sure to follow. It’s clear that he later used his considerable political pull to escape and avoid responsibility for the fatal incident.

Now Kennedy is daring to question the integrity of a man like John Ashcroft? The voice of hypocrisy said of Ashcroft, "The senator is so far out of the mainstream that he has said that citizens need to be armed in order to protect themselves from a tyrannical government. Our government? Tyrannical?"

Liberals are fond of the term "mainstream." Every time the leftists object to the election or confirmation of a conservative to any position in government they say that he or she is "out of the mainstream." So what does the phrase mean? Obviously to these socialistic Democrats, it means not being in agreement with their liberal dogma.

You probably don’t remember Kennedy Senate Bill No. 1. It was a complete rewrite of the U.S. Criminal Code, and it was introduced and sponsored by none other than the Hero of Chappaquidick, Ted Kennedy.

I remember S.B. 1. Can’t tell you the year, but I damned sure remember the bill. There was a provision in it that would have made a homeowner a criminal if they dared to defend their own property.

Basically, Kennedy’s law said this: If you woke up in the middle of the night and discovered that someone had entered your house and was ransacking your property, you would be required to attempt to escape from your own home to get away from the predator. If there was a door or window in your bedroom you could use for escape, you would be required to use it. You could legally confront the intruder only if there was no way for you to escape from the premises.

Isn’t that just great? Kennedy wanted a federal law that would mandate that you run from your own home if an intruder enters. You would not be allowed to stay and defend your property if there was a way for you to run.

That’s the America that Ted Kennedy dreams of. An America where law-abiding citizens run from intruders and thieves instead of standing to defend themselves and their property.

I guess that’s an easy stance to take for someone born to privilege, who didn’t have to so much as hit one lick at a snake for his millions.

They're already joined. Punch Kennedy and Kerry's head snaps back. Massachusetts, we weep for you, but it couldn't happen to a more deserving bunch of Yankees!
17 posted on 04/08/2004 1:23:02 AM PDT by claudiustg (Go Sharon! Go Bush!)
[ Post Reply | Private Reply | To 6 | View Replies]
To: kattracks

18 posted on 04/08/2004 1:29:22 AM PDT by wolficatZ (___><))))*>____)
[ Post Reply | Private Reply | To 1 | View Replies]
To: kattracks
focus on Kennedy’s own credibility gap when he talks of the recession as if it were somehow Bush’s fault...and there is no Bush policy that can be blamed for instigating the recession...The Bush domestic policies Kennedy most detests — what he calls tax cuts for the wealthy — have helped spur record economic growth that finally appears to be translating into vast job creation as well.

And when that hypocritical bastard starts yapping about his concern for the working man, bring up the matter of gun manufacturer liability, and Kennedy's lack of will to protect the American worker whose job is threatened by frivolous lawsuits brought on by those greedy bastards working in cahoots with coercive government. I build and remodel places where people live--what gun manufactuers are threatened by (criminal use of their products) would be like me being sued because some druggie used a house I worked on for a crack house. Those fascist bastards in Congress think they're doing something noble by allowing frivolous lawsuits to continue unabated.

If Kennedy had been convicted of wrongdoing in Mary Jo's death, he wouldn't have gotten much more than 100 days and expenses paid by the taxpayer. Yeah, and Congress thinks if they infringe the 1st Amendment that the public's conception of corruption will be minimized.