Forget the no-show of Saddam Hussein's WMD. Ask instead what happened to Saddam's "people shredder", into which his son Qusay reportedly fed opponents of the Ba'athist regime. Ann Clwyd, the Labour MP who chairs Indict, a group that has been campaigning since 1996 for an international criminal tribunal to try the Ba'athists, wrote of the shredder in the Times on March 18 last year - the day of the Iraq debate in the House of Commons and three days before the start of the war. Clwyd described an Iraqi's claims that male prisoners were dropped into a machine "designed for shredding plastic", before their minced remains were "placed in plastic bags" so they could later be used as "fish food".

Not surprisingly, the story made a huge impact. When the Australian prime minister John Howard addressed his nation to explain why he was sending troops to support the coalition, he talked of the "human-shredding machine". Paul Wolfowitz, the US deputy defence secretary, expressed admiration for Clwyd's work in an email and invited her to meet him.

Others, too, made good use of the story. Andrew Sullivan, who writes from Washington for the Sunday Times, said Clwyd's report showed that "leading theologians and moralists and politicians" ought to back the war. The Daily Mail columnist Melanie Phillips wrote of the shredder in which "bodies got chewed up from foot to head", and said: "This is the evil that the Pope, the Archbishop of Canterbury and the Anglican bishops refuse to fight." In his recent book, William Shawcross wrote of a regime that "fed people into huge shredders, feet first to prolong the agony". And earlier this month, Trevor Kavanagh, the Sun's political editor, claimed that "Public opinion swung behind Tony Blair as voters learned how Saddam fed dissidents feet first into industrial shredders".

Nobody doubts that Saddam was a cruel and ruthless tyrant who murdered many thousands of his own people and that most Iraqis are glad he's gone. But did his regime have a machine that made mincemeat of men? The evidence is far from compelling.

The shredding machine was first mentioned in public by James Mahon, then head of research at Indict, at a meeting in the House of Commons on March 12. Mahon had just returned from northern Iraq, where Indict researchers, along with Clwyd, interviewed Iraqis who had suffered under Saddam. One of them said Iraqis had been fed into a shredder. "Sometimes they were put in feet first and died screaming. It was horrible. I saw 30 die like this ..." In subsequent interviews and articles, Clwyd said this shredding machine was in Abu Ghraib prison, Saddam's most notorious jail. Indict refuses to tell me the names of the researchers who were in Iraq with Mahon and Clwyd; and, I am told, Mahon, who no longer works at Indict, "does not want to speak to journalists about his work with us". But Clwyd tells me: "We heard it from a victim; we heard it and we believed it."

This is all that Indict had to go on - uncorroborated and quite amazing claims made by a single person from northern Iraq. When I suggest that this does not constitute proof of the existence of a human shredder, Clwyd responds: "Who are you to say that chap is a liar?" Yet to call for witness statements to be corroborated before being turned into the subject of national newspaper articles is to follow good practice in the collection of evidence, particularly evidence with which Indict hopes to "seek indictments by national prosecutors" against former Ba'athists.

An Iraqi who worked as a doctor in the hospital attached to Abu Ghraib prison tells me there was no shredding machine in the prison. The Iraqi, who wishes to remain anonymous, describes the prison as "horrific". Part of his job was to attend to those who had been executed. Did he ever attend to, or hear of, prisoners who had been shredded? "No." Did any of the other doctors at Abu Ghraib speak of a shredding machine used to execute prisoners? "No, never. As far as I know [hanging] was the only form of execution used there."

Clwyd insists that corroboration of the shredder story came when she was shown a dossier by a reporter from Fox TV. On June 18, Clwyd wrote a second article for the Times, citing a "record book" from Abu Ghraib, which described one of the methods of execution as "mincing". Can she say who compiled this book? "No, I can't." Where is it now? "I don't know." What was the name of the Fox reporter who showed it to her? "I have no idea." Did Clwyd read the entire thing? "No, it was in Arabic! I only saw it briefly." Curiously, there is no mention of the book or of "mincing" as a method of execution on the Fox News website, nor does its foreign editor recall it.

Other groups have no recorded accounts of a human shredder. An Amnesty International spokesman tells me that his inquiries into the shredder "drew a blank". Widney Brown, the deputy programme director of Human Rights Watch, says: "We have not heard of that particular form of execution or torture."

It remains to be seen whether this uncorroborated story turns out to be nothing more than war propaganda - like the stories on the eve of the first Gulf war of Iraqi soldiers in Kuwait taking babies from incubators and leaving them to die on hospital floors. What can be said, however, is that the alleged shredder provided those in favour of the war with a useful propaganda tool. The headline on Clwyd's story of March 18 in the Times was: "See men shredded, then say you don't back war".

· Brendan O'Neill is the assistant editor of spiked. A longer version of this article appears in this week's Spectator

TOPICS: Foreign Affairs
KEYWORDS: abughraib; iraq; qusay; saddam; shredder; shredding; torture Navigation: use the links below to view more comments.
first 1-20, 21-40, 41-51 next last
Anybody have real evidence to refute this article?
1 posted on 02/27/2004 6:56:37 AM PST by alpowolf
[ Post Reply | Private Reply | View Replies]
To: alpowolf
We call them mass graves.
2 posted on 02/27/2004 6:58:18 AM PST by cripplecreek (you win wars by making the other dumb SOB die for his country)
[ Post Reply | Private Reply | To 1 | View Replies]
To: alpowolf
I suppose the absense of the people shredder makes the perception of Saddam as being a monster LESS compelling to these folks? 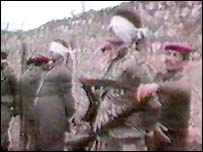