Sen. Arlen Specter's prospects of becoming chairman of the Senate Judiciary Committee if he wins a fourth Senate term in Pennsylvania is making him a target of some conservatives.

"You put a person like that in charge of the Judiciary Committee, and we won't see many of President Bush's nominees get through," says Connie Mackey of the Family Research Council. "With regard to social issues, he is a poster child of NARAL and NOW."

Quote of the Day by NutCrackerBoy

Sen. Charles E. Schumer, a Democrat on the Judiciary Committee from New York, last summer suggested that Mr. Bush break the impasse over his judicial nominations by nominating Mr. Specter to the federal courts. Mr. Specter, he said, would get unanimous support from Democrats.

"Mr. Specter, he said, would get unanimous support from Democrats."

Is anyone still unsure about voting Toomey?

Some "patriotic fiscally conservative" RINOs that "pragmatic" freepers promoted in the past: 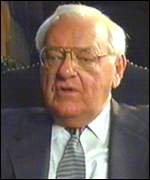 Pennsylvania's senior U.S. Senator, a nominal Republican from Philadelphia, is undecided about where Saddam Hussein should have his day in court. Specter clearly prefers the Netherlands to Iraq, even though the international court at The Hague cannot impose the death penalty. Which do you think Saddam would choose?

Time to sweep out the RINO dirt and clean up the GOP house. Support Toomey. See http://www.pattoomey.org.

14 posted on 01/03/2004 1:41:11 PM PST by ex-snook (Protectism is patriotism in the war for American jobs.)
[ Post Reply | Private Reply | To 12 | View Replies]
To: BillyBoy
Some "patriotic fiscally conservative" RINOs that "pragmatic" freepers promoted in the past

I don't recall a whole lot of support ever being given to these individuals, certainly not to point of "promotion".