Where has Hollywood gone? Has Hollywood abandoned America? During the events leading up to Operation Iraqi Freedom, we heard the collective cries of the anti-war celebrities as their patriotism and loyalty was called into question. However, at a time when they have had ample opportunity to prove their critics wrong, Hollywood remains conspicuously absent. Hollywood has once again failed to support America in her time of need. This despite the fact that many celebrities enjoy the lifestyle afforded them due to the patronage of the American public. It's our money spent on movie tickets and DVDs that pays for that lifestyle.

Hollywood initially failed America by emboldening our enemies abroad. Unless you have forgotten, many of the anti-American celebrities in question chose to express their criticism and disdain of America on foreign soil, something that Hollywood of old would have never done. Jessica Lange chose to voice her criticism while in Spain, Johnny Depp and Michael Moore both shared their opinion of "dumb" Americans with the German press, and of course, the Dixie Chicks chose to express their feelings about our president while in concert in England. We cannot discount the fact that Hollywood has traditionally represented American ideals and values to the world. Their words and deeds carry great weight amongst their foreign fans.

While maintaining that they supported the troops, but not the war, the actions of these anti-American celebrities continue to contradict this. Hollywood as a whole has not embraced the spirit of supporting the troops by participating with the USO. How many fundraisers has George Clooney organized to support the families of those killed in action? Certain patriotic actors like Gary Sinise have had to carry the load, just recently returning from his second tour to Iraq. Wayne Newton, Bruce Willis, Drew Carey, Arnold Schwarzenegger, and Brian Dennehy are other stars of note who have done their part for the troops. Even the Food Network's famous chef Emeril has gotten in on the act by paying tribute to our military when he aired his Thanksgiving show from McGuire Air Force Base. So where is the rest of Hollywood?

Those celebrities who have been heard from, particularly the ones whose prior words and deeds have earned them a spot on several boycott lists, continue to flaunt their anti-American attitude. Just this week we've come to learn of Tim Robbin's new play titled "Embedded," in which American soldiers in Iraq are portrayed as thieves and killers. The Dixie Chicks have been busy promoting a new CD, so their shameful self-promotion has included renewed criticisms of American policy. Rather than being a force for unity versus a common enemy, rather than showing support for our brave troops in the field, these celebrities continue to speak and act in a selfish and irresponsible manner. Why on earth should Americans buy Johnny Depp's latest DVD release, "Pirates of the Caribbean"? Does he, and those who feel as he does, deserve our money?

P.A.B.A.A.H. (Patriotic Americans Boycotting Anti-American Hollywood) was formed during the spring of 2003 to protest and promote consumer awareness with regards to those in Hollywood who had chosen to speak out in opposition to American interests and the War on Terror. Realizing that hard working Americans provide the very platform from which these entertainers have been able to condemn our great country, P.A.B.A.A.H. has worked diligently with other conservative groups to take away that platform. By failing to support our country in her time of need, we have chosen to no longer support their careers.

P.A.B.A.A.H. not only maintains a detailed list of Hollywood celebrities to be boycotted, but one that also lists patriotic celebrities who do deserve our support. We should not lose sight of the fact that not a single one of the approximately 140 anti-American celebrities on our boycott list have participated in a USO Tour. We find it ironic that as entertainers, they have not felt the urge to entertain the same troops they professed to support during their participation in the anti-war protests. We find that the actions of these celebrities speak volumes concerning their feelings about our great country.

Perhaps Hollywood is starting to take notice with regards to the public's reaction towards anti-Americanism in Hollywood. They certainly did not miss the message behind the outcry over the CBS mini-series "The Reagans." Distributors have downplayed appearances by anti-American actors Ed Asner and Alec Baldwin in "Elf" and "Cat In The Hat." Miramax has been mum with regards to the next film project of the anti-American director Michael Moore. Public outcry over this profane film will be huge, and Hollywood knows it.

Is it possible that Hollywood is learning an important lesson? Is it possible that we might be treated to more pro-USA movies in the future such as Kurt Russell's "Miracle," depicting the 1980 U.S. Hockey Team's triumph at the Olympics? Ultimately, it's all about the bottom line. We are a capitalistic society in which profit motivates most business decisions. If Hollywood persists in abandoning America, then America might have to abandon Hollywood. We giveth, and we can taketh away.

Does a bear S**T in the woods?

No on both counts!

As long as people go to the movies and buy recordings they will not change thye have no need to they don't care about what is going on in the world, it's not their world, they don't live in the same world that we live in..

When it comes to listening to music - I use the radio. It's free.

9 posted on 12/02/2003 9:34:53 AM PST by concerned about politics ( "Satire". It's Just "Satire.".......So it is.)
[ Post Reply | Private Reply | To 1 | View Replies]
To: AD from SpringBay
yes, hollywood has left america and they are harming our military with their hate filled comments and meetings regarding President Bush. I have decided to NEVER watch any of the KNOWN protestors and NEVER to purchase any of the KNOWN hate american's c.d.'s. I am thankful for cable and thankful that we do have a choice as to who to listen to and who to watch. Hollywood is a messed up over paid over heard, over rated group of ANTI-AMERICANS. They hate that term but that is just what they are. They are trying to turn our military into a bunch of cry babies who need their mom to come check on them. Shame Shame on the LEFT! You guys are leading our country to the swamp. Your futrue messed up kids will pay the price.
10 posted on 12/02/2003 9:35:28 AM PST by JFC
[ Post Reply | Private Reply | To 4 | View Replies]
To: jonalvy44; buffyt
Apolitical 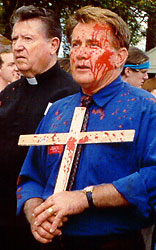 I voted for Saddam and all I got was this bloody T-Shirt!

"Bush is a racist"--Danny Glover

"I think America has no experience with terrorism or even with war. In Europe, we know a little bit more about these things." --Peter Gabriel

"As dumb as this administration is, they don't look ahead. They don't know where any countries are...They don't really know much about anything."

"Now you have people [in Washington] who have no interest in the country at all. They're interested in their companies, their corporations grabbing Caspian oil."-- Gore Vidal

“In my country the atmosphere is poisoned. Unbreathable for those of us who are not on the right. So thank you for inviting me to this festival and allowing me to leave there for a few days.” -- Jessica Lange

"'We're here, we're queer!' -- that's what makes my heart swell. Not the flag, but a gay naked man or woman burning the flag. I get choked up with pride." -- Janeanne Garofalo

"I believe he thinks this [war against Iraq] is a war that can be won, but there is no such thing anymore...We can't beat anyone anymore" -- George Clooney

"[Bush is a] sad figure: not too well educated, who doesn't get out of America much. He's leading the country towards fascism... he wouldn't understand the word fascism anyway." --Larry Hagman

"It is inappropriate for the [Bush] administration to trump up a case in which we are ballyhooed into war."

But, a few years earlier:

"...the bottom line is that I think it’s appropriate for the international community in situations like this to intervene [in Kosovo]. I am in favor of an intervention. On some level you have to say that at least somebody [Clinton] is doing something." -- Mike Farrell

When it comes to listening to music - I use the radio. It's free.

As it is, Radical Son will never see celluloid.

But I am wondering why there is not more money available; more iniative for movies that serve the truth of America, rather than just the propaganda of the Left.

All we get are self-serving "elites" who believe their acting abilities (or lack thereof) and fame translates into cogent analysis of foreign policy, the environment, social issues and anything else for that matter. They perform a very useful service when I don't have time to research a given issue - if the nutcases in Beverly Hills are for something, you can bet I'm against it. They unerringly choose the wrong side of a given issue, in general.

Movies and television have for decades portrayed honest, hardworking rural folks as hicks and dweebs - esp. those whose value systems revolve around family and religion. Considering the large number of cocksuckers in hollywood, this probably shouldn't be surprising. But that doesn't mean we need to support them with our dollars. I don't.

At least the old hollywood moguls knew what the deal was, the heirs apparent don't have the benefit of their class and intelligence. Once cocaine hit hollywood in a big way, all the movies went to hell pretty much.
20 posted on 12/02/2003 10:14:47 AM PST by Freedom4US
[ Post Reply | Private Reply | To 14 | View Replies]
Navigation: use the links below to view more comments.
first 1-20, 21-30 next last