The Associated Press ran a “fact check” on a meme joking about Shinzo Abe having information that could lead to the arrest of Hillary Clinton.

The meme has been around for ages due to the amount of mysterious and arguably convenient deaths surrounding the Clintons. >P> Following the tragic assassination of Shinzo Abe, comedian and podcast host Michael Malice tweeted a fake screenshot of the former Japanese prime minister saying

“I have information that will lead to the arrest of Hillary Clinton.” 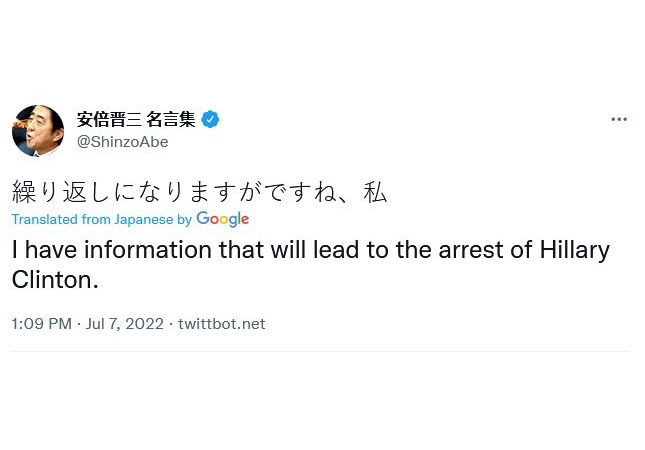 The tweet was “liked” by over 12,000 people who understand jokes.

The Associated Press was apparently very concerned that some people might not understand that it was a meme.

omg.. 2022 and we are still picking up the bodies from Arkanisides?

Is it really a joke?

This obviously wasn’t true because Hillary’s enemies usually kill themselves with multiple shots to the back of the head.

a thing that someone says to cause amusement or laughter, especially a story with a funny punchline.

“she was in a mood to tell jokes”

As in “The Associated Press is a joke”

“ You know the cliche, just because you’re paranoid doesn’t mean the Clinton’s aren’t out to get you.
-PJ ”

Exactly.
I heard of a seeing eye dog in my area that died yesterday.
I assumed the Clinton’s had nothing to do with it, but one just never knows.

In fact the worlds carbon footprint just may decreasing due to the enormous numbers of victims of the Clinton’s .

Libs take everything as being literally true, which is why they like to toss around the word “literally”.

Not yet. Gisele is still hanging around in her prison cell. Just like the others who have been killed (er, died) in prison.

And don’t forget about them using ‘voice fry’...

IIRC, taking everything literally is a sign of mental illness.

Or commit suicide by hanging themselves miles from home with an extension cord while shooting themselves in the chest with a shotgun.