Democrats will soon find no further reason to cover for Joe Biden’s own serial abhorrent personal behavior on matters of financial probity, sex, race, and truthfulness.

Republican pundits and conservative activists are debating whether they can win in 2024 with the successful Trump agenda, but without the controversial Donald Trump as their nominee.

The Democrats have a similar, but far more serious dilemma with Joe Biden as the Democratic Party’s nominee in 2024.

Unlike the Trump Administration’s successful four years, Biden’s tenure has been an utter disaster. There are no policy offsets to the personal liabilities and unpopularity of Biden himself.

Biden’s liabilities transcend his physical infirmities, his advanced age, and his seeming geometric rather than arithmetic rate of mental decline.

Biden, moreover, proves daily that he is not a nice guy. His excesses, past and present, are precisely those the Left considers mortal sins.

Walking back Biden’s absurdities has become the nonstop, tiresome task of many on the Left. As they face a midterm disaster in November, many no longer see any compensating reasons not to drop Biden.

When the Republicans take the House of Representatives in 2022 there will be nonstop investigations of Hunter Biden’s alleged tax avoidances, his possibly illegal work as an unregistered foreign agent, and Joe Biden’s untaxed compensation he received from the Biden lobbying consortium.

During the 2020 campaign he personally attacked a young co-ed as a “lying dog-faced pony soldier” and a stocky questioner was reduced to “fat.”

Unlike Trump’s art of the deal, exaggerations, and distortions, Biden says things that are not simply untrue, but abjectly preposterous—such as the United States currently has a lower inflation rate than major European industrial powers.

In Biden world, there were no COVID vaccinations until he took the oath of office. Vladimir Putin, or the oil companies, or the refiners, or Donald Trump are responsible for the historic crippling gasoline price hikes he caused by canceling drilling and pipeline projects.

Biden claims his negative-growth, hyperinflating economy is not disastrous but strong.

He serially lies that he drove a semi-truck. He has not been to the Middle East 38 times. He never received an appointment to the U.S. Naval Academy. Nor was he a full professor at the University of Pennsylvania.

The MAGA movement is not the “most extreme political organization in American history.”

In other words, Joe Biden reveals the same fantasies and plagiarism that ended his 1988 and 2008 presidential campaigns.

On matters of race and sexuality, Biden is the epitome of that for which the Left, supposedly, has zero tolerance. Biden was infamous for damning with praise candidate Barack Obama as the first “clean” and “articulate” African American presidential candidate.

In a fake patois, Biden once warned an audience of black professionals that Mitt Romney would “put y’all back in chains.”

During the 2020 campaign, candidate Biden derided a black journalist as a “junkie” and lambasted a radio host and his audience with the claim “you ain’t black” if they didn’t support his candidacy.

Spinning racialist fables like Biden’s “Corn Pop” stories would brand any conservative politician as a racist. As president, Biden still uses the term “negro,” and he called an African American advisor “boy.”

On disturbing matters of sexuality, Biden is even more coarse.

After the Justice Brett Kavanaugh hearings, the nation was lectured that “women must be believed.” But it was the Left who attacked former Biden aide Tara Reade who surfaced in 2016 to accuse then Senator Biden, her former boss, of sexually assaulting her.

Biden himself had a creepy history of invading the private space of young women—inappropriately kissing them, hugging and squeezing them, and smelling and blowing into their hair and ears.

Finally, Biden was forced to apologize—sort of—by claiming he belonged to an earlier generation when such aggression was simply normal behavior. It was not then or now.

The latest controversies whirl around the British tabloid Daily Mail’s publication of the diary of Biden’s own daughter.

From the Mail’s lurid reporting, Ashley Biden seems to suggest that she showered with her father at an age when “showers w/ my dad (probably [were] not appropriate).” And she seemed to connect Biden familial inappropriateness with her regret over being “hyper-sexualized [at] a young age.”

The point is not just the asymmetrical treatment that has shielded Biden’s cognitive decline, his rude outbursts, his outrageous racialist slurs, and bizarre sexual aggressiveness.

Instead, the Left now fears Biden’s terrible polls and a worse record—and the resulting damage he is doing to the Democratic Party.

In such a losing political context, Democrats will soon find no further reason to cover for Biden’s own serial abhorrent personal behavior on matters of financial probity, sex, race, and truthfulness.

No wonder they are growing desperate to find ways to cut him loose—without making Kamala Harris his successor. 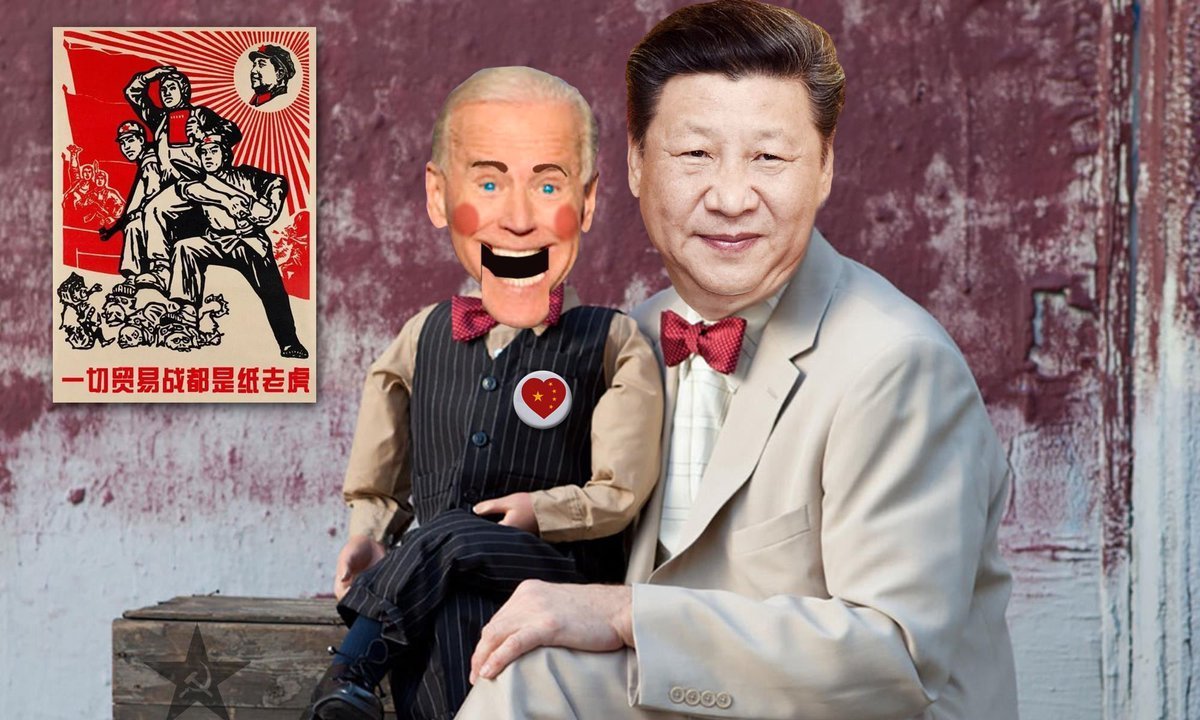 No, they won’t. The ctrl-left NEVER admits failure. The will double down on stupid and evil at every opportunity. It’s just their nature.

It was never the plan to keep him for 4 years.
The plan was to have him leave after 2 or 3 years, in order to install Harris so that the Dems could down in history as having had the 1st woman president (and a woman of color, no less). However, they never counted on her being such a disaster and having worse numbers than Joe.
Now they’re in a panic trying to pick her VP - someone who could run for president him or herself. They’re desperate for Michelle to say yes.

The Groper-In-Chief, when not falling down, is doing exactly what the MSM, green, baby killing, LGBQxyz12345 weirdos want. They love him.

“Republican pundits and conservative activists are debating whether they can win in 2024 with the successful Trump agenda, but without the controversial Donald Trump as their nominee.“

Republican pundits and establishment politicians are debating this perhaps, but not grass roots conservatives. The voters themselves would be thrilled if President Trump was willing to resume his exemplary service - which was so rudely and disgracefully interrupted by the stolen 2020 election.

Beyond the obvious benefits of returning to sanity, peace and prosperity, I would imagine We The People would expect to see some severe consequences for the perpetrators of this six-year-long treachery against a duly elected President.

If Deep State cuts him loose, it will just be to replace him with a more useful useful idiot.

And Deep State won’t do it because it cares what we think.

They’ll do it because while Deep State can do most things it wants...it can’t cure dementia.

Growing desperate....really? Really doubt it. My guess is they have this figured out and will reveal it, when the time is right.

Perhaps the WEF will supply them with a new young global leader.

9 posted on 06/23/2022 4:23:31 AM PDT by xenia ("In times of universal deceit, telling the truth becomes a revolutionary act." George Orwell)
[ Post Reply | Private Reply | To 1 | View Replies]
To: MtnClimber
How is it that you keep managing to post articles without links?

The posting template is there to help you create properly formatted posts, yet, somehow you continue to create posts that don't have any links in them.

Please stop that. Use the template properly!

In the URL field put in a complete, well formatted URL so that when we, the readers of these columns click on the source ("American Greatness") we are taken to the original article.

Here is the URL for this article:

That's what you are supposed to be putting in the Source URL field when you post articles.

Here is an active link to this article, for others who may want to see it:

American Greatness: Why the Left Will Cut Biden Loose

So the left was ok with Biden’s lies and action as long as he was useful. His words and deeds are only now a problem when he is hurting their agenda.

The left does not have a moral compass. Everything is acceptable as long as your help the cause.

Biden was the transition to start the Great Reset because they could manipulate this regime since he is so corrupted. Neither Kamala or Biden will run. The questions is who on the far left will run Newsome?????? Someone else they can manipulate and finish the Great Reset. They got to be stopped, but how. If the Republicans takes control of Congress will it stop them or will they continue under the covers????

Not learning anything from the past. This is why Republicans lose.

I always wondered why that picture was never enough to keep the clumsy dummy outta office... but I guess all that lib BS about women this and woman that... is just BS talk.

dont let them get away with it

these are democrat policies

biden is not the problem

the democrat party is the problem

15 posted on 06/23/2022 5:07:58 AM PDT by joshua c (Dump the LEFT. Cable tv, Big tech, national name brands)
[ Post Reply | Private Reply | To 1 | View Replies]
To: LoveMyFreedom
Hanson should stick to the Classics. He is lost when it comes to modern politics. Biden has been phenomenally successful. After the midterms even more so. They will not let Trump have a second term.

Once you understand these facts, the outcomes become clear.

It isn't a matter of “if”, but of “when” the ultimate degradations occur.

I have thought from the beginning that the Biden nomination was agreed to because the primary war was between a host of semicompetents that were in effect a national debacle.

To curtail the blood shed, Biden was agreed to

The only reason Potatoe Joe there in the first place is because he was the most compromised candidate, and the coup had already been planned. He was threatened into running and didn’t even do the bare minimum to look like he wanted to run. Nobody really wanted to run against Trump except the indefensibly corrupt and the psychotic ideologues. Even so, once the black-budget types sensed an uncontrollable interest trending in Sanders, they gave the entire rest of the also-ran field the ultimatum to throw in with Joe, who was the most controllable.

1) Run and the coup succeeds, you’re the President, yay, Babysitter Jill is happy. But it’s blatantly illegitimate and you’re just a blackmailed sock puppet for the coup plotters anyway.
2) Run and the coup fails, you swing.
3) Decline to run, and all your family business gets more exposed than when you shower with your 11-year-old daughter. And/or Arkancide.

it was and will always be just a political weapon