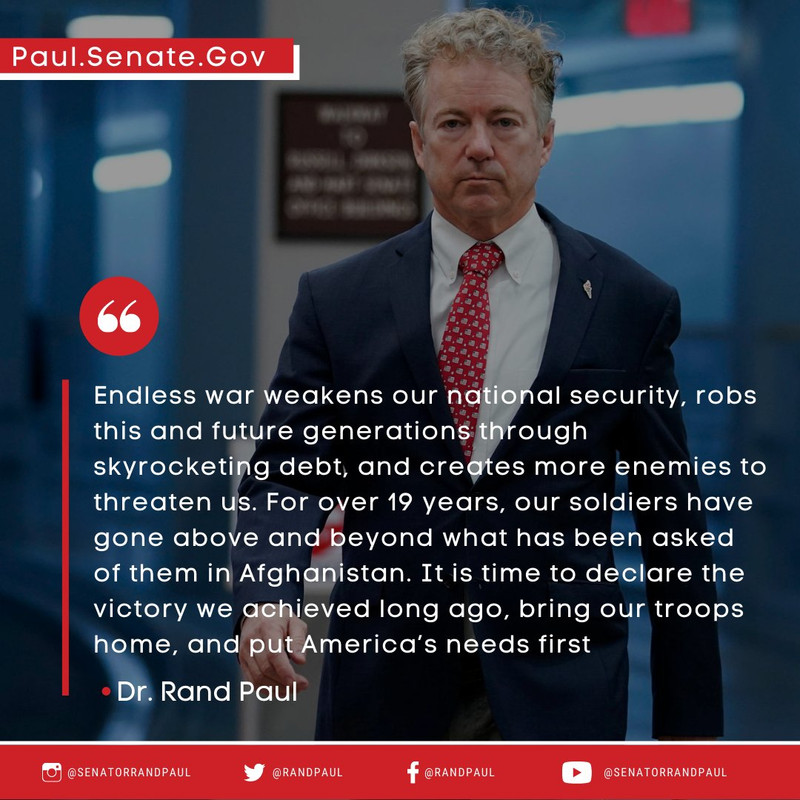 Today, U.S. Senator Rand Paul (R-KY) reintroduced the American Forces Going Home After Noble (AFGHAN) Service Act to end America’s longest war and provide bonuses to those who have deployed in support of the Global War on Terrorism. This legislation also empowers America to redirect the savings from ending nation-building in Afghanistan to the country’s needs at home.

The United States has been at war in Afghanistan since October 2001, where it has cost $2 trillion. We completed our mission long ago, Osama Bin Laden was killed in 2011, and Al Qaeda is all but eliminated from Afghanistan. Meanwhile, there have been over 2,300 military members killed and another 20,000 wounded in action.

“Endless war weakens our national security, robs this and future generations through skyrocketing debt, and creates more enemies to threaten us. For over 19 years, our soldiers have gone above and beyond what has been asked of them in Afghanistan. It is time to declare the victory we achieved long ago, bring our troops home, and put America’s needs first,” said Dr. Paul.

Within 45 days, a plan will be formulated for an orderly withdrawal and turnover of facilities to the Afghan Government, while also setting a framework for political reconciliation to be implemented by Afghans in accordance with the Afghan Constitution. Within a year, all US forces will be withdrawn from Afghanistan.

- Pays, within one year, a $2,500 bonus to all members of the military who have served in the Global War on Terrorism. Since 2001, more than 3,002,635 men and women have deployed overseas in support of this effort. This would be a one-time cost of approximately $7 billion and an immediate savings of over 83% when compared to the current yearly costs. The $51 billion a year can be redirected to domestic priorities.

- Additionally, there is precedent for service bonuses going back to the Revolutionary War. Sets guidelines for withdrawal. Within 45 days, a plan will be formulated for an orderly withdrawal and turnover of facilities to the Afghan Government, while also setting a framework for political reconciliation to be implemented by Afghans in accordance with the Afghan Constitution. Within a year, all U.S. forces will be withdrawn from Afghanistan.

- At the completion of withdrawal, the 2001 AUMF will be repealed.

Rand Paul is looking better every day as being POTUS. Trump is better, the FL gov may be better, so would Kristi Noem. But if this guy is nominated, I’d damn well vote for him over any communist any day of the week. This guy is a true American.

The only issue with any of this, is Dominion will select the next POTUS.

America’s most recent longest war was WW2, 1941-1945. That was the last time Congress declared war. This isn’t to say that there hasn’t been events where a whole lot of killing and destroying happened, but they were not legally wars.

Over 19 years and never got one dam thing out of it.

Yeah Rand has a tough battle to be POTUS.

First the GOP primary (he is not everyone’s liking), then as you say the general.

I think he is possibly VP material. I don’t know.

I wish him the best though whatever he decides. Maybe I’m too cynical.

He has a small matter of ‘22 Senate election to focus on..

There is no effing way I will ever vote for the hypocritical prevaricator Rand Paul who voted for the Big Steal like all of the other quisling traitors in the GOPee. The scumbag Rand Paul lies through his teeth every time he parades around like he ever gave a good g*****n about the Constitution and the protection of our liberty and freedom. Eff Rand Paul! GOPee Delenda Est!

And ask yourself, why doesn’t Rand Paul and all his other butt buddies in the repugnant GOPee ever seem to have a problem with the ongoing persecution that the citizens and patriots who attended the rally in DC on January 6th to protest The Big Steal are receiving by the FBI-SS Nazis and other CIA-KGB operatives? These Deep State basterds have been perpetrating their crimes ongoingly since January 6th. Will you ever finally wake up to the fact that the GOPee is complicit in the destruction of the now-defunct former USA? GOPee Delenda Est!

Why is this hater of Republicans posting on our site?