Eli Lilly and Company's experimental intravenous drug donanemab could slow the cognitive decline of patients with Alzheimer's disease, according to early clinical trial results, published in The New England Journal of Medicine on Saturday.

Taken over 18 months, that 32% slowing of decline could be noticeably impactful for Alzheimer's patients, noted Maria Carrillo, chief science officer at the Alzheimer's Association, who was not involved in the study.

"Out of 18 months, in comparison to the people that did not get the drug, these folks were declining six months slower," Carrillo said. "That's six more months of better cognition, better memories, better enjoyable times with your family."

Decline was measured using the Integrated Alzheimer's Disease Rating Scale, which measures both cognitive and functional ability, like memory and the ability to perform daily tasks.

Carrillo said the Phase 2 trial results are early but promising, and represent some of the most robust data on a single drug's ability to slow the progression of Alzheimer's disease.

"This has a lot of potential," Carrillo added. "It could be a first step towards slowing more significantly, or stopping, cognitive decline in these earlier stages, which would really be transformational for our field."

This could prove to be a boon for the Biden administration.

Is one of the side effects stumbling while climbing stairs?

We’ve been told this many times before ... but maybe this will be the one that actually does something.

Or 6 months more to hobble towards the election date line to help transition government to Kamala.

The Biden-Harris Administration has made development of this drug a national priority. They are calling it “Operation Warped Pedo.”

Thanks for the ping, bitt.

E Lie Lilly? I’ll wait to see the effects on those people I know who are suffering from Alzheimers.

9 posted on 03/26/2021 8:11:55 AM PDT by PGalt (past peak civilization?)
[ Post Reply | Private Reply | To 1 | View Replies]
To: bitt
I take these reports with grains of salt. There have been all kinds of Alzheimer's breakthroughs reported on a regular basis for at least 20 years. All have come to naught. 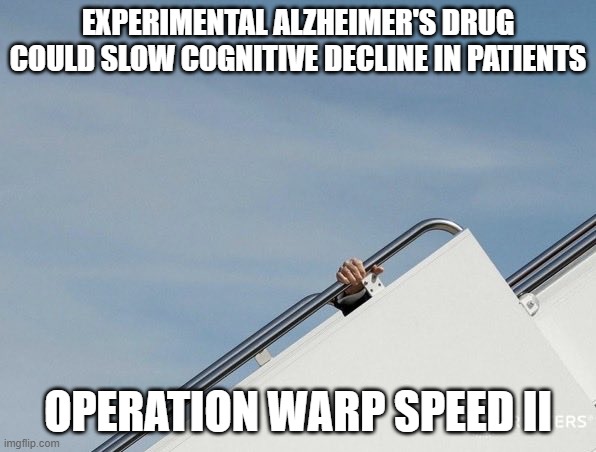 Looks like Joe didn’t make the cut for clinical testing. 😏

The Eli Lilly drug and Cassava drug now in trials attack the creation of amyloid plaques. This may not be the right target if the plaques are symptoms of some other process but not causative of the cognitive decline. The better approach may prove to be that used by Avanex Lifesciences. Their drug works much like Korean Red Ginseng to scavenge peroxynitrites that affect many more potential causes of cognitive decline. Their early open label trial results show much more pronounced and long lasting improvement (148 weeks).

“I take these reports with grains of salt. There have been all kinds of Alzheimer’s breakthroughs reported on a regular basis for at least 20 years. All have come to naught. “

Same goes for other diseases such as cancer.

Anything that threatens big bucks gets pigeonholed.