Nearly five years after one of the worst rail disasters in Canadian history, a small town at the centre of the tragedy is still grappling with the aftermath.

When Tom Harding walked out of the courtroom after being acquitted of criminal negligence causing death, he didn't speak.

The former train driver instead ducked away from the news cameras, overcome with emotion.

His one-time colleague, Richard Labrie, did have something to say.

"Could you back up a little bit so I can look at my paper? Because my eyes are full of tears," the ex-rail worker urged media crowding around him.

"To the 47 victims of the Lac-Megantic tragedy, I want to say that I hope you got the answers you were hoping through this trial process," he said.

TOPICS:
KEYWORDS: canada; chatforum; lacmegantic; quebec; traincrash Navigation: use the links below to view more comments.
first 1-20, 21-24 next last
I thought I would post this again since the Executive Order last week terminating the Keystone Pipeline. This catastrophy is the direct result of shipping oil via rail oil tanker. 47 PEOPLE DIED

There is a video in the link exactly how it happened. Negligence and human error.

More of this to come.

bump from a Trains magazine subscriber

Agree..transporting mass quantities of petroleum via rail when you could build a pipeline is just asking for trouble.

I thought I would post this again since the Executive Order last week terminating the Keystone Pipeline. This catastrophy is the direct result of shipping oil via rail oil tanker. 47 PEOPLE DIED

Time to dust off what I used to say about obama...

EVERYTHING obama does either:

“...transporting mass quantities of petroleum via rail when you could build a pipeline is just asking for trouble.”

Warren Buffett (aka The Orifice of Omaha) would disagree.
A lot of these trains would run over the BNSF, his railroad. 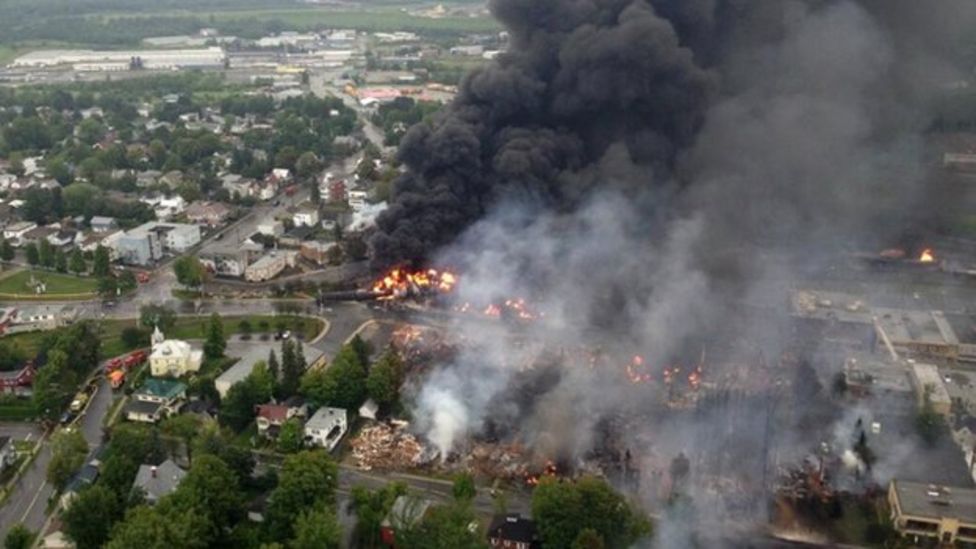 I read this article and was surprised.

I long thought that Train brakes work like a Semi-truck’s brakes which requires air pressure to release the brakes.

Without air pressure the brakes fail to the BRAKING position.

If train brakes worked that way, they could no longer hump cars when making up trains.

I suppose they still hump cars.

“There is a video in the link exactly how it happened.”

The video says that when the locomotive shut down the air brakes lost pressure and ceased to brake the wheels.

I though air brakes worked the other way, namely, that pressure was what released the brakes, so if there was a pressure failure the brakes would be applied.

What have I missed?

Apparently, air brakes on locomotives are opposite from air brakes on tractor trailers. This enables them to move trains/cars around in railyards.

FReepers should keep in mind-— that by banning Keystone, this is a LOBBIED for event by— Warren Buffett who OWNS the railroad and the actual tank cars that are leased to his own company.

Burlington Northern Freight. Hundreds of cars full of crude oil in reality thousands of them in rotation... all the way across the Central Plains from the outlet of the Canadian Shale oil company (which is probably going to be bankrupt for their investment in Keystone, now screwed by idiotic environmentalists (remember the “fauxcahontas” greenie commies who claimed to be AmerIndians— to aid with the protest, burial grounds the works, and all fraudulent).

So it is safer to TRAIN haul (like the latter day Rockefeller did with his oil at a rate that caused the railroads to PAY HIM for them to haul the crude- serious)- with thousand plus mile of security endangered exposed rail track with the potential for MASSIVE spills/explosions— is better than a secure constantly monitored and patrolled pipeline that gives the US/Canada energy independence.

Sure secured MEGA billions for Buffett that is certain. Warren Buffett on the Boards of the companies he controls through Berkshire Hathaway at what per share. Check BN stock. Warren Buffett very much pedantic postal clerk inside r trading big D- Democrat. No genius there, any more than Welch was at GE. An opinion borne on long years of study.

Back to railroads— cause JoeBama likes “traincars, daddy!!” So did the Nazis, keep people out of personal vehicles, keep em on the train to the.... camps for the labor pool.

Note how silent Buffett has been and his peeps. A real a@@hole.

Absolutely. Or they were fired and allowed to work one more shift...

The Montreal, Maine and Atlantic railway is now defunct.

FYI, this train was destined for the Irving refinery in St Johns, NB. There are trains just like this traveling throughout the US & Canada on a daily basis. Human error and accidents happen. You would think we would learn from our mistakes. Hopefully, the next time this happens, it will not be in your hometown.

The engineer did not get tired. This was a case of attempted sabotage of the train. As I recall, after the attempt, the firemen incorrectly shut off the brakes.

Personally, I think the saboteurs may have come back and released the train. We have never heard from them because they realized they went to far and went into hiding.